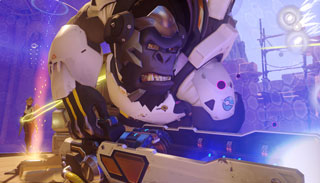 Blizzard may be teasing the first look at a new Overwatch hero, and it might be a gorilla.

The Overwatch anniversary event doesn’t end until June 12, but that isn’t stopping Blizzard from teasing what looks like new content for its multiplayer shooter. What new content? Well, it could be a new map, a new hero, or maybe both.

In a post on the official Overwatch blog, you’ll find an in-universe report on the Horizon Lunar Colony. There are a few things of interest here, but perusing the messages included in the post finds mentions of gorillas undergoing genetic therapy, and you may notice that one of the scientists (and specimens) is named Winston. The final image shoes that two specimens are missing – one named Winston, and the other named Hammond. Hammond is mentioned previously in the messages offered as having been missing for a week, and he’s described as a “smaller test subject.”

So what does this mean? Well, it seems to be the beginning of a tease of some sort of new content. Right now, I could see it being a new hero, especially if that hero is the aforementioned Hammond. It could also be the first look at a new map set in the Horizon Lunar Colony.

Whatever it turns out to be, Blizzard it obviously looking to add more content to Overwatch in the coming months, and this is just the first tease of what will likely be many. Got a theory on what Blizzard is teasing? Tell us what it is in the forums!

Pump Up Your Playlist with the Glowbar Speaker from Neva Tech – Just $35!

Sony Has Finally Ended Production of the PlayStation 3