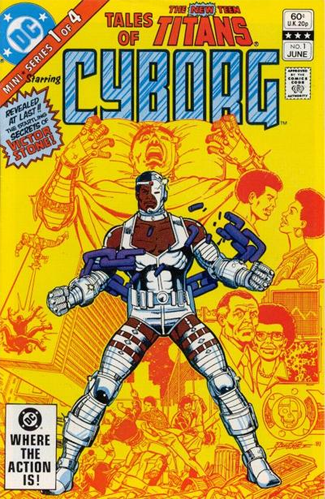 Speculation that the now-shooting sequel to Man of Steel, still widely refered to by its unofficial title Bamtan Vs. Superman, will serve as the direct launching point for a Justice League movie just got another big boost: Theater actor Ray Fisher has been cast in the previously unnanounced role of Victor Stone, aka the half-man/half-machine superhero Cyborg, joining a roster of DC Comics heroes that already includes Ben Affleck as Batman, Henry Cavill as Superman and Gal Gadot as Wonder Woman.

Created in 1980 by Marv Wolfman and George Perez, Cyborg originated as a member of the first Bronze Age iteration of the Teen Titans. One of DC’s most prominent African-American heroes, Stone (in the comics) has enhanced genius-level IQ and cybernetic body parts installed by his scientist parents after he was critically injured during an experiment at S.T.A.R Labs. In 2011, he was made a member of the Justice League as part of DC’s “New 52” reboot.

The character was briefly part of the final 80s iterration fo the Superfriends cartoon, but attained lasting mainstream popularity through the Teen Titans animated series over a decade later. At this time, no indication has been given to the size or scope of Fisher’s role in the film, i.e. whether or not he will become Cyborg as part of the story or have already been transformed when the story opens.

The film is currently still set to open on May 6 of 2016, opposite Marvel’s Captain America 3.

The FCC’s Net Neutrality Sellout: A Wakeup Call And A Slap In The Face