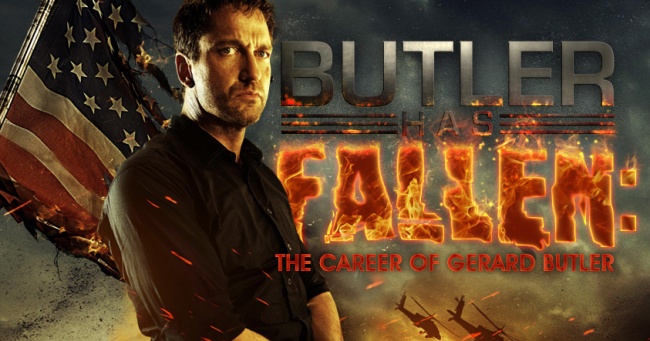 After Gerard Butler starred in movies on back-to-back weekends, Gods of Egypt and London Has Fallen – neither of which was good – a question came across my mind that I couldn’t get rid of: What has Gerard Butler done that was even remotely successful? I followed up that question with this one: Could these two latest failures mark the end of Butler’s theatrical career? The answer to the first is an easy “yes, there are some things,” although the amount of good stuff he’s done is severely outweighed by the bad. The answer to the second isn’t so easy, and requires one to explore his past in hopes of searching for a way to predict the future.

Note: All box office totals are found on BoxOfficeMojo.

Gerard Butler was given his first role in the 1997 film Mrs. Brown, something that was nominated for two Oscars – neither of which involved him – and was generally well-regarded. That same year, he had a small role in the James Bond film Tomorrow Never Dies. But despite those two relative successes, he found himself playing supporting roles little-known films and TV series for the next couple of years, with perhaps his biggest role coming as the lead in the three-hour miniseries Attila, playing the title character.

It was a year after Attila that Butler broke into Hollywood, and where his career actually starts to get interesting. In 2002, he had a big role in Reign of Fire, and played second fiddle to Angelina Jolie in the second Tomb Raider movie. It’s worth noting that neither of these movies did particularly well at the box office. Reign of Fire grossed $82 million worldwide, only $22 million more than its reported budget, and likely losing the studio somewhere in the neighborhood of $40 million. (The rule of thumb is that a studio needs to make about double a film’s budget to break even, although it varies from film to film.) Lara Croft Tomb Raider: The Cradle of Life killed the film franchise and made over $100 million less than its predecessor. The films scored 40% and 24% respectively on Rotten Tomatoes, neither of which is an endearing score.

His Hollywood career was not off to the greatest start.

2003 saw Butler billed third in Timeline, a film that grossed about half of its $80 million budget, and was panned by both critics (11% on Rotten Tomatoes) and audiences (45%). That’s right: Butler’s first three big Hollywood movies all underperformed at the box office and were all critical failures. In spite of this, Hollywood saw something in Butler, so he was tried out in other types of roles. 2004 saw him in a well-received (81%) drama called Dear Frankie, and as the Phantom in a new Phantom of the Opera film. Dear Frankie went largely unseen – it’s a small drama, though, and wasn’t given a wide release. The Phantom of the Opera, meanwhile, was more of a success, especially internationally. It made around $155 million worldwide – over $100 million of which was from the international markets – and made just enough to make back its $70 million budget. It wasn’t a critical success (32%), but audiences liked it (84%). Maybe something had been found.

A rather dull 2005 and 2006 saw Butler in just two films – an inspirational sports drama in 2005 called The Game of Their Lives and as Beowulf in 2006’s Beowulf & Grendel. Neither of those films made it into more than 100 theaters, and neither grossed more than $400,000. But, hey, sometimes you have to take a step back to take a leap forward, and that’s what Butler did in 2007. 300 was the film that made Butler a household name. In it, he got into incredible shape, shouted memorable lines like “This is Sparta,” and genuinely look and sounded like he could be the next big action star. 300 made a great deal of money ($456 million on a $65 million budget), was a moderate critical success (60%), and was loved by audiences and internet meme creators – the latter of which I presume because there are no circumstances in which yelling “This is Sparta!” does not immediately make something funnier.

His career would soon come spiraling down.

The same year as 300, Butler starred in P.S. I Love You, shedding his newly established tough guy image in a romance that didn’t do well critically (24%), but did make money – especially overseas ($103 million). He was, it would seem, now a draw at the box office. That success continued into 2008 with Nim’s Island ($100 million) and RocknRolla (#1 at the UK Box Office, although its total international numbers are less thrilling). 2009 was more mixed, with successes in The Ugly Truth ($205 million) and Law Abiding Citizen ($127 million), but a disaster in Gamer ($40 million on a $50 million budget).

The recurring theme during this time, and one that would become apparent in the years to come, is that even while Butler’s movies were making money, they were critical nightmares. People were still going to see these movies, but for the most part they weren’t good. That sort of constant lack of quality makes it understandable why he currently acts more as box office poison than as a draw. But that’s getting ahead of ourselves.

2010 only gave Butler one live-action role, which was in The Bounty Hunter, a film that still made money ($136 million), but was another critical failure (13%). It was here that Butler stopped getting big Hollywood roles, as it took him until 2013 to get another film with a budget over $30 million. Coriolanus is the one critical success of this period, but it failed to make anywhere close to its $7 million budget – although it was given a tiny release. Machine Gun Preacher cost $30 million and only made back $3.3 million – 85% of which was international. And Chasing Mavericks, which was given a wide release and a $20 million budget, failed to recoup even half of that. Playing for Keeps, a rom-com with 3% on Rotten Tomatoes, didn’t make back its $35 million budget – even though Butler’s previous romantic films had all done well.

2012 could have been Butler’s last year in Hollywood.

Looking at it now, 2012 pretty much was the end of Butler’s career until 2016’s current resurgence. Apart from a cameo in Movie 43 (4%, $32 million international gross), he only had one live-action role in this time, which was in Olympus Has Fallen, a movie with such a tepid reaction that its bigger-is-better sequel was given a lower budget than it because of a lack of bankability. Until Gods of Egypt, that was his only big live-action role in 2013, 2014, and 2015.

We’re currently in 2016, which so far saw Butler star in Gods of Egypt and London Has Fallen, as well as a couple of yet-to-be-released films that likely won’t be released until next year. With two straight bombs, after a period in which he was barely working, this very well could be it.

Of course, you may have noticed that I started categorizing his roles as “live-action” ones, and that’s because of Butler’s second big success: the How to Train Your Dragon films. The reason I’ve separated them is because while Butler has a fairly substantial role in them, their target audience consists primarily of children who don’t know who he is (or don’t care). It’s true that they made money and were good films, but the amount of credit that can fall on Butler’s shoulders is minimal at best. They’re successful, but not because of him. It’s like the punter in football on a Super Bowl winning team. They won the biggest prize there is, and he’s certainly a part of it, but his importance is a lot less than almost everyone else involved. That includes, but is not limited to, the mascots, cheerleaders, and the audience watching on television.

So, that brings us to where we are now. My questions at the beginning were: (1) What has Gerard Butler done that was even remotely successful? (2) Could these two latest failures mark the end of Butler’s theatrical career?

The answer to the first is “300 and the How to Train Your Dragon franchise,” only the first of which he can take a substantial amount of credit for. Mrs. Brown, Dear Frankie, and Coriolanus are the only other critical successes of his career, and his biggest live-action grosses were actually for his romantic films – at least for a while – with The Phantom of the Opera, P.S. I Love You, The Ugly Truth, and The Bounty Hunter. The problem is that his good films weren’t seen, and the films people saw were bad, which explains the lack of enthusiasm we currently have for him. He also failed to capitalize on his on unqualified success. After 300, it took him two years to star in just one action film (Gamer, which bombed), and then four more years for another big one (Olympus Has Fallen).

The answer to the second question is likely a “yes.” From 2013 until today, he’s only had non-cameo roles in three live-action films, one of which did terribly, one of which made just enough for a lower-budgeted sequel, and the final of which is too early to call, but if it’s profitable it’ll only barely be so. His career was almost already dead, and we’re watching what is likely its second, and final, wind. Without a massive hit in the next year – and his next scheduled release is a January release in 2017, which isn’t a good sign – Butler’s going to need nothing short of a miracle to save his career.

Will he get that miracle? Does he deserve it? What are your thoughts on Gerard Butler as an actor?