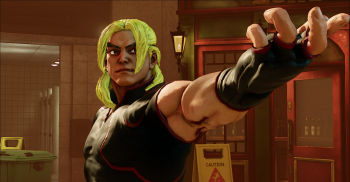 Capcom wants there to be a lot more distinction between Ryu and Ken.

Street Fighter‘s Ryu and Ken are two of the most iconic faces in video games, and one of the most iconic rivalries out there. Being trained by the same master, but from very different backgrounds (Ken is from the US while Ryu is Japanese) the pair have remained largely unchanged throughout Street Fighter history. But, fans were shocked to discover that Ken’s Street Fighter V appearance would be drastically different from what they were used to. In an interview with IGN, Capcom sheds some light on why Ken was changed.

Lunn explains that the differences go beyond cosmetics, and that Street Fighter V‘s Ken actually plays a bit more differently this time around, and changing up his outfit helps differentiate him from his rival. “So I think the team wanted to separate the two a little more, so it wasn’t a ‘white ninja dude, red ninja dude,'” said Lunn.

“Clone” characters (characters that have the exact same moveset of another character but with minor tweaks) are certainly a thing that fighting games sometimes struggle with. Ken was probably one of the original “clone” characters, and while he has changed a bit over the years he still played fairly similarly to Ryu until now.

What do you think of the new Ken? Personally, I still prefer his classic look, but maybe he will grow on me?

CliffyB Says FPS Campaigns Take up 75% of The Budget