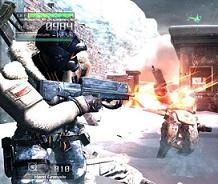 Capcom’s Kenji Inafune is continuing to follow his long-held hypothesis that the Xbox platform will help Capcom and Japanese companies grow into foreign markets.

While being questioned for a Capcom-hosted public relations interview, Managing Corporate Officer Inafune addressed his company’s growing foreign presence, both in its development deals for the Xbox 360 and even outsourcing game creation to foreign countries with Bionic Commando‘s Swedish team, GRIN.

“The key is always thinking about things hypothetically,” explained Inafune. “I learned this from someone else, but hypothesizing has proven to be extremely important. By layering hypotheses on top of one another, you are able to see the future. You can’t see the future by just doing what is in front of you.”

Sensing that the Japanese games market was shrinking compared to the rest of the world, he realized “we couldn’t continue on our present course,” and instead “set my sights on overseas markets.”

“When you consider that there are only 120 million people living in Japan versus the population of say China or the United States, it is simply a matter of practicality,” he stated. “Yes it is true that Japan once had a one third share of the gaming market, but when you look at the world population, you can see just how disproportional that was.”

Capcom’s first attempt at targeting American gamers, Shadow of Rome, wasn’t profitable and was considered “half-baked”, but it taught the Japanese valuable lessons in marketing and demographics. Inafune continued to focus on Xbox 360 development despite resistance from others in the company.

“I think I can only get away with saying this now, but I really thought that the using the Xbox was only way to break into overseas markets, and I took that hypothesis all the way. In the end, I am very happy that I did so,” he commented. “Also, I think the hit success of Dead Rising and Lost Planet helped to bring our sometimes difficult creator organization together.”

Tech Two Livestock: A Pirate in Name Only