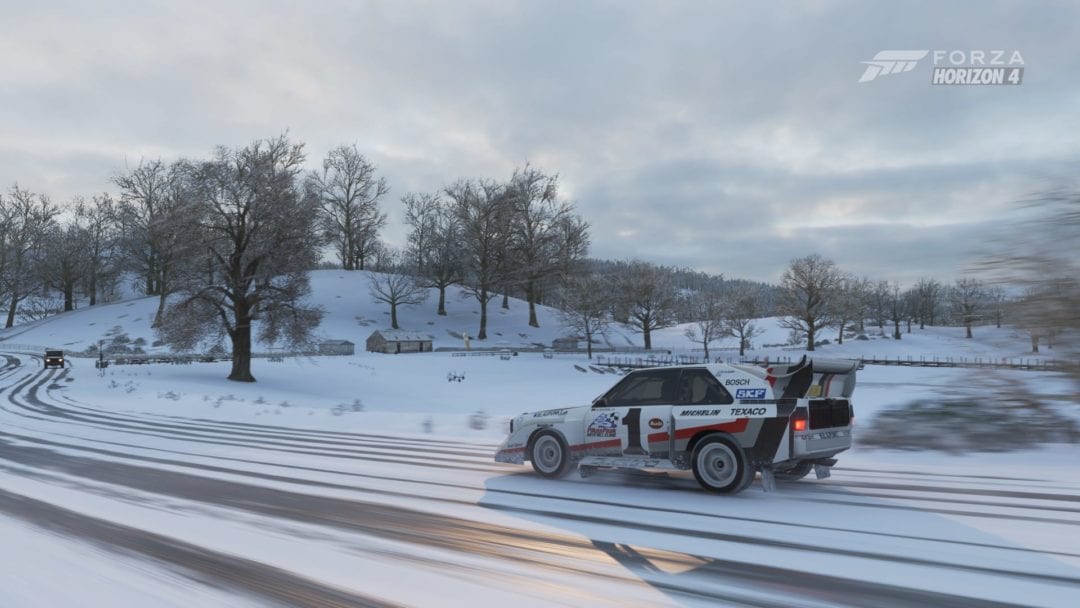 Forza Horizon 4 buries me in reminders of why I love cars. The game knows that cars are a threshold as much as a body themselves, a gateway to experiencing the world in an extra-human way.  The first time its glistening model of Great Britain softened into winter, rime crusting over the muddy road to my lakeside garage of absurdly beautiful vehicles, I was transported to every January drive I’ve ever taken across Route 20 in upstate New York. The burnished light of the sun, grey behind the clouds, as I speed slowly down the valley from Pompey to Cazenovia, ice and bare branches becoming a kaleidoscopic blur beyond the car window. Old music, the chunk of muddy snow crust falling from my wheel well as I shift from fourth into fifth, the push and moan of arctic wind against the doors forcing me to adjust the wheel in clean, decisive motions. Every idiotic commercial about the freedom of the road becomes real; the car makes me more than animal while also activating every animal pleasure I can know. My brain and my heart recognize that moment all over again as I glide an off-white Audi towards another road race, another scenic overview, another cross-country drive to Horizon’s festival grounds. Of course it’s not the real thing, but it comes so close I almost want to put on a coat.

And just when I think the game will push me into some milky nirvana of weather, motion blur, and dreams of speed, it reminds me of why I hate cars more than almost any other invention on earth. The incessant throb of consumerism that surrounds cars — more clothes, more machines, more toys, more things — follows every glorious race as you unlock money, “influence,” and rewards for just another chance to acquire even more cars, more stuff. They fuel pollution of every stripe: the needless roar of big dick engines ruining quiet streets, the visual gaudiness of ego-stroking body mods on gas-guzzling Chevys dulling your eyes. Dead cows for my leather seats, ruined steel in a junked Subaru after a crash. A tide of carbon molecules poisoning the atmosphere so snowy drives like those I love will become as extinct as the lions that roamed the real countryside Forza’s England imitates. Cars are the ultimate expression of human arrogance, a fleet of one billion knives cutting the world apart every day.

For now, Forza Horizon 4 is a living document. Microsoft studios Turn 10 and Playground Games will continue to update it over the next two years, adding in new cars and pop detritus — a half dozen of James Bond’s cars are already in there — so virtual drivers can keep cruising its streets and adding their own customized vehicle builds to the community. Every time I pick up the controller, though, Forza feels more and more elegiac. Both the gross reality and the freewheeling fantasy of cars captured here are endangered by climate change, technological evolution, and the economic realities caused by both. Forza Horizon 4’s vision will inevitably vanish. Not in my lifetime, but soon.

At times it feels like Forza is even trying to prepare players for the inevitable death of driving as we know it, to preserve all the good and bad while giving you an idea of what’s to come. The game will drive, if you want it to, much of its most challenging courses for you. Everything from braking to tire grip can be adjusted on a scale of automation to full simulation. (The only penalty is that you’ll earn less payout for your accomplishments, but the game hurls so many rising numbers at you so consistently that the penalty is largely an illusion.) Real cars increasingly control themselves as well and the industry’s expectation is that human oversight of moving vehicles will vanish over the coming decades.

SAE International, the standard-setting professional organization that oversees the automotive industry, defines self-driving cars on a scale of five. Most modern cars are Level 1, where you control most of the operations but the car softly makes adjustments to steering and other functions all on its own. There are, however, already Level 3 cars that can toggle between human and dominantly-AI operation on roads. Level 3 cars can fail because they rely on human drivers to spring into action if the myriad decision-making systems don’t do their job. That’s why companies like Ford are pushing to get Level 4 cars — stripped of steering wheels, gas pedals, and all the regular accoutrements that give these machines their mythic feel, their operation surrendered almost entirely to automation — on roads by 2021. The faster the push towards full automation, the less chance for the driver error that causes 94 percent of all accidents.

Forza Horizon 4’s guiding hand isn’t there to strip out error, save lives, and breed efficiency like the robots replacing these machines in the real world. All of the options in the game, whether turned to the max to replicate every painstaking decision to not swerve off a rain-slicked road or to make drifting a dreamy, intuitive breeze, are there to enhance the romance of the drive itself. If you took an unwieldy relic like the 1958 MG MGA Twin-Cam onto the actual streets of Edinburgh, you’d have to fight it every inch of the way. Finessing the clutch, cramming your body into the compact but luxuriously curved chassy, and struggling to convince the steering wheel to follow your lead while the engine cackles like a Black Sabbath chorus. In digital Edinburgh, it can be hard if you want it to be. It can also be plush and forgiving as you cruise the streets watching fall foliage glitter against a photorealistic sky. Forza Horizon 4 is the amber pouring over the insect at the beginning of Jurassic Park; when cars are just reasonably intelligent couches, its MGA Twin-Cam will remain.

That MGA Twin-Cam will also cause less harm in the safety of Microsoft’s game. The average car puts 4.6 metric tons of carbon dioxide into the atmosphere every single year. Forza’s line up alone would put around 2 trillion tons of carbon into the air in a single one of its painstakingly rendered seasonal cycles. The idyllic summer of flowery fields would, like ours, drown in torrential rain. The irregular heat would keep the winter courses brown, muddy, and temperate. East of Edinburgh, the beachside cross country course would vanish under a rising tide.

That’s only the long-term environmental burn of the cars. Think about all the implied waste in this game: the unused Horizon Festival merch, all the cars you don’t buy. Or what about the pedestrians, livestock, and wild critters that would be savaged every time you took a mission as a movie stunt double in the game, tearing ass through a country windmill and landing a half a kilometer away? Chaos and destruction in Forza Horizon 4 is pure pleasure. Playing in simulation mode will get your car banged up and you’ll have to pay to fix it, but no one will die. No deer line the curbs collecting flies.

The game can leave you with the lingering sting of consumer culture with its uniformly fashionable human avatars with improbably perfect bodies and its constant deluge of brand iconography. Like all advertising, though, its poison will be rendered inert by time. Marketing culture only lives as long as the bugs that never splat against your perfectly clean windshields in Forza. Only the drive will remain. The feel of the road. Even the less noxious end of car culture’s performative side is kept alive by the ability to draw on your million-dollar machines like a sheaf of fresh loose leaf.

When I started thinking of Forza less as a modern entertainment and more as a monument to ingenuity and hubris and humanity’s endless capacity for creation and destruction, I started to like it even more. Romance will not die with the robo cars. We will not stop glorifying the imagined freedom of mechanical transportation as the existential threat of climate change forces us, one way or another, to abandon fossil fuels. People will just get romantic about their robots. (As long as there are people left.) The car and the drive as we dream of it will die, though. Collectors and property owners will let fetishists try out the real thing, but my grandchildren will never know a winter morning on Route 20, the rumble of a Chevy Blazer harmonizing with grit and slush whipped into the air by fast rubber. For them, Forza Horizon 4 will be a fantasy like Seven Samurai or Red Dead Redemption, a preserved and harmless document of a past as mystic as it was toxic.