The expansion of videogames as an entertainment medium has always been inevitable. Some like to pour blame or credit upon Nintendo and the huge strides it’s made with the Wii and DS systems; others look to Facebook or mobile gaming as the outlet through which new demographics have streamed into our field of view. Of course, the prevalence of gaming as a popular mainstream hobby extends further back than that, with each new generation of gaming platforms reaching out to a successively wider audience. There was no great revolution, more a steady evolution until we reached where we are today – with games being enjoyed by people from all walks of life.

The game industry doesn’t think in such measured terms, however, and so the “rise” of what’s called the “casual” gamer has been seen as a sudden, radical, jarring alteration to the world of interactive entertainment. Whether you think casual gaming is as old as the industry itself or a brand new concept, the undeniable fact of the matter is that it’s here and games like Just Dance, Wii Fit, and Wii Sports Resort typically storm the charts as developers scrabble to conquer a market of gamers who don’t necessarily like “games” as we’ve come to know them.

Some of us have embraced the shifting focus while others have witnessed it through squinting eyes, full of fear, doubt, and jealous anger. A significant contingent of so-called “hardcore” gamers look down on the casual players – the soccer moms and the grannies – belittling their stupidity, their lack of taste, or their willingness to support shovelware. Unfortunately, as much as one may snootily sneer at these mainstream fools, one has to remember a rather stark and unpleasant fact – in more than one way, they’re better than you. They might lack your history, your knowledge and your “respect” for the industry, but they deserve a place in this market as much as anybody else, and they are beneficial to the health of the market in several ways.

First of all, casual gamers are far more open to new ideas than you. Just look at how much resistance Kinect was met with by the typical Xbox 360 gamer. I’m not exempting myself from this, either. I mercilessly tore Kinect apart before launch and I still have no interest in it. I respect it as a concept, but as a gaming device it is not for me because I only see it working for shallow titles. The “casual” gamer does not think this way. They see it as a fresh way to mess about and have a laugh. They’re not worrying about the game’s limitations when it comes to movement control, and they don’t care that the games lack any reasonable amount of depth. Like with the Wii (which many “hardcore” gamers mercilessly mocked before its launch), the mainstream consumer simply saw something that looked interesting, and invested in it.

This investment in the new and the unique is something that your core gamer still needs to learn. Of course, you may think that you’re the one with the open mind since you only play deep, meaningful games, but how trusting are you of a new IP? The fact that Kane & Lynch 2: Dog Days sold over a million copies while Enslaved: Odyssey to the West barely managed to scrape past 400,000 units sold seems to indicate that core gamers rarely trust new IP over sequels. 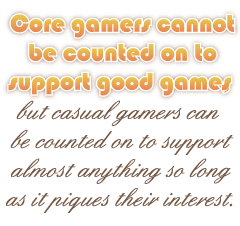 If it’s not made by an established studio working on a proven IP, people claim that they’ll “wait for the bargain bins.” I ask you, does your typical casual gamer care which studio made a game, or whether it’s the sequel to a title with a 90% Metacritic average? More than likely, your soccer moms and your grannies do not care one iota about such things. When they see something unique and new, they’ll give it a shot.

Maybe you’ve been burned one too many times by new games. I understand that. I’m not saying you’re a terrible human being for being more careful with your cash, but are you better for the industry with your lack of trust? Maybe not. Many unique games – Killer 7, Okami, Psychonauts, Majin and the Forsaken Kingdom, to name but a few – have fallen by the wayside due to the hardcore gamer’s inherent skepticism. Core gamers cannot be counted on to support good games, but casual gamers can be counted on to support almost anything, so long as it piques their interest.

Another major difference between the hardcore gamer and the casual gamer is piracy. I don’t wish to rake over old leaves, but it’s worth pointing out that piracy has led to a dearth of traditional portable titles. Nearly every “hardcore” gamer I’ve ever met with a Nintendo DS has bought an R4 Card to download any game they wish. Is it hardly surprising that games like Imagine Babyz and Brain Age become the biggest sellers on Nintendo’s system? While I am sure there are exceptions, most of your soccer moms aren’t involved with piracy. It is the “core” gamer who is more tech-savvy and willing to illegally download games – just tell a gaming community that piracy is wrong and you’ll be bombarded with abuse and threats from those trying to justify their actions.

M-rated games don’t sell very well on the Wii and the DS, and I’m willing to bet a huge part of the reason why is the sheer ease with which hardcore gamers can steal software. Not to mention, the lack of PSP games has often been blamed on how easy it is to install custom Firmware and run downloaded titles. Now, if piracy is your thing, that’s fine – just don’t bitch about Ubisoft putting steaming piles of casual crap on the DS, because ultimately those are the games that aren’t going to get stolen.

For me though, the biggest way in which casual gamers are superior to core gamers is with the advent of social gaming. Here is where our accusatory claims that casual gamers are “dumb” really fall apart, because – quite frankly – a Farmville player is enjoying him or herself in a far smarter way than you.

It’s incredibly easy to look down on Farmville as some sort of mindless, evil little time-sink, and in many ways it is exactly that. It was designed solely for people to waste hours of their life, and to be thoroughly addictive. Here’s the thing though – a Farmville player exerts far more authority over the way they play than the average Xbox 360 or PS3 user.

Unlike a $60 game, Farmville and its kin are free experiences. It costs you absolutely nothing to get started, and there’s a surprising amount of content to be enjoyed at the entry level. There are items that cost real-world money, and they can certainly help or enhance the experience, but they are not crucial to your enjoyment. If you want to take your fun to the next level, you can spend an insignificant amount of dollars to receive new items or bump up your in-game currency.

Contrast that to the way we play games. $60 entry fee, which we’re more than happy to pay if we feel a game has enough developer prestige, and if we want to enhance the experience, we have to pay money on top of that. Whether it’s Guerrilla releasing downloadable map packs on Killzone 3‘s launch day or Namco Bandai expecting you to pay for level-ups in the latest Tales game, developers can and will get away with charging us extra money on top of the $60 we already dropped.

Now tell me, who is smarter? Bear in mind, of course, that the Farmville player is having just as much fun as you are, regardless of the experience’s respective depths. I’d say it’s smarter to dictate for one’s self how much an experience is worth.

I am aware that I said you’re inferior for not spending $60 to try new games, while also implying you’re inferior for spending $60 on any games. I do not mean to state that you’re inherently stupid for spending $60 on videogames, just that the Farmville players might be onto something, and it’s perhaps a method of play that we should be trying to embrace and investigate, rather than automatically look down upon. It all comes back to my earlier point: Core gamers seem to resist the new and distrust the unique. Farmville is a relatively new player on the pitch, and most of us have already decided it is scum.

Hardcore gamers – and do bear in mind that I include myself in that bracket – like to stamp their feet and scream that publishers have “abandoned” them, but when I look at the distrust of new things, I cannot say I blame them all that much. I don’t doubt that most core gamers, the ones who don’t spend all their time bitching about reviews on forums, genuinely adore the hobby and want to support gaming, but we are not the worth the amount of attention we demand.

Our hatred of the casual consumer, which is picking up the slack that core gamers leave behind, should stop. They do things for the industry that you do not, and they can be counted on in areas where you cannot. By all means, look after your money, pirate games, and stay away from Farmville in favor of richer experiences. Just don’t think you’re better than the demographics currently being catered to because you are, in fact, no more special than a soccer mom.

Jim Sterling isn’t saying anybody’s better than you, just that you’re worse than everybody.

A New Breed of Player