Game of Thrones is a mediocre show. It shortchanges the complexity of its own story in a hasty rush to please its fans with grand “moments” absent depth.

As is the case with many artistic properties, fans may very well be part of the problem – not just fans of the show, but also of the books. Consider one item of popular consensus: “A Feast for Crows is the worst book in the series.” The specific reasons vary, but overall they chalk up to it: (1) being slow; (2) leaving out the more important characters in favor of less interesting ones; and (3) having digressions that afford little immediate payoff.

These reasons are hard to argue with, but the conclusion is misguided. Feast has in spades what even the fifth book – A Dance with Dragons – and especially what Game of Thrones as a series do not; genuine authorial integrity. 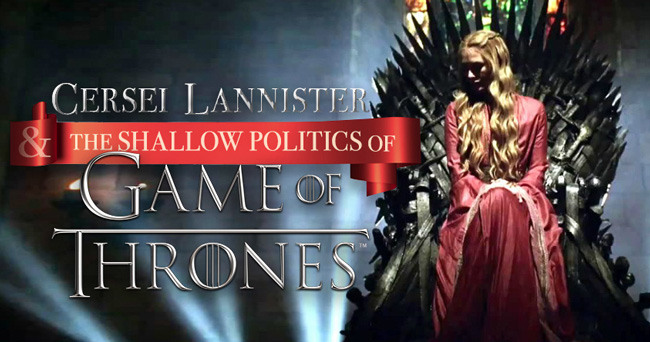 To be sure, the critique I am about to write is not intended to suggest that Game of Thrones should simply have done what the books did. The point is only that the show has missed a genuine opportunity.

A Storm of Swords was the Act 3 earthquake. Three dead kings, three conquered cities, family betrayals, assassinations, and chaos in the north; the kingdoms are ravaged, shaken, and turned upside down. What often follows events like those are spirals, character breakdowns, conflict escalations, and uneasy breaths before the next plunge. A Feast for Crows has all of these.

One of those spirals in Feast is particularly interesting on a political level; the degeneration of Cersei as a ruler. Her story in that book is a neat little contrast to the cynicism of the overall series and imparts some relevant lessons in politics.

George R.R. Martin inverts traditional genre tropes, develops characters by taking away their noteworthy source of strength and makes readers fear their mortality. As such, it is fitting that Cersei’s perspective begins immediately after the death of her father Tywin – the great golden rock upon which she learned the ways of power and politics. Without him, the prophecy she has feared since childhood begins to creep at her.

Over the course of the book’s events, she consolidates power to a small group of bumbling yes-men. She refuses another Hand and even goes so far as to burn down the Tower. She willfully ignores the kingdom’s debts to the Iron Bank. Her fiscal irresponsibility wreaks further economic havoc on the kingdoms, and she does nothing about it. As she grows increasingly distrusting of the Tyrells, she dispatches Loras to siege Dragonstone and Jaime to the Riverlands – campaigns that both end miserably even in victory. For her worst idea, she empowers the Faith Militant to further secure herself. Then, when she seeks to use religious law against Margaery, her plans backfire spectacularly.

Cersei takes pride in her womanhood while simultaneously lamenting that she had not been born a man.

Cersei’s paranoia and narcissism are the driving forces behind every mistake she makes, and she expresses these attributes through her sexual aggression. She sleeps with Lancel and Osney Kettleblack (after likely having also slept with Osmund before) to whip them into doing her bidding, and dominates Taena of Myr. Like a combination of both Macbeth and Lady Macbeth, her mind is full of scorpions, each thought more violent than the last as she grows discontent with her surroundings, despite maintaining that she has done all the right things to secure her position. In addition, she drinks herself fat, and wakes from her bed heavily sweating from dreams of doom. Clearly, this is the optimal state of health and priorities for someone in charge of seven kingdoms soon to face an ice-elf/zombie invasion.

Also, Cersei takes pride in her womanhood while simultaneously lamenting that she had not been born a man. And she tells herself constantly that no one can get the better of her because no one understands her. She seethes over the fact that Tywin is buried with a smile on his face, which she believes betrays his memory. She tells herself again and again that Tommen can wait because this is “her turn,” and she believes that she has earned it by outwitting everyone from Robert to Jon Arryn to Ned Stark while also having endured the worst of indignities as a woman (note: this is all before she is shaven, stripped naked, and gets rotten cabbages thrown her way). She looks at Senelle with murder in her eyes. She preens herself – in graphic detail – over how she fooled Robert constantly into believing that her children were his. Then, when everything unravels, she turns back to Jaime, believing in his unilateral devotion to her and completely oblivious to the extent to which her murderous schemes and extra-loving affairs have alienated him.

Feast, in sum, has one character embodying the worst attributes of Richard Nixon, Catherine the Great, Niccolo Machiavelli, Hillary Clinton, Donald Trump, and Bloody Mary. Cersei’s cynicism may not have been wholly unreasonable under the circumstances, but if that’s all you have as someone who actually needs to govern, you’re in a race against yourself to the bottom. Cersei cannot rule because she doesn’t see a continent that needs to be managed; only enemies who need to be controlled or subdued and a position at the top of a ladder to keep.

To be sure, most of these are flaws that would just as well cripple the leadership of a man in her position all the same. History is full of degenerate sons who couldn’t live up to their fathers, and so is the royal line of Westeros. Yet Cersei herself, in all the irony, thinks herself immune from these issues precisely because she’s a woman. In the end, she’s just another person, who just so happens to be in charge of everything, and is horrifyingly out of her depth at being a ruler. 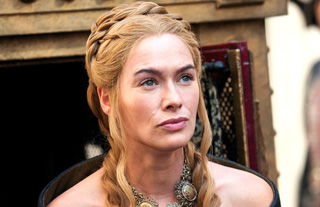 Consider what all this says about power and those who desire to wield it, particularly in a civilized nation desperately in need of some unity. By subtly showing Cersei’s demise through her own perspective, Martin warns against autocracy. He doesn’t rely on the nature of these family squabbles turning into colossal wars to do this thematic lifting for him. He has both Cersei’s perverted femininity, sex craze, and inner madness show that power concentration poses a risk to everyone. He shows the destructive consequences of believing that most jobs can be done by anyone; that you can ignore budget problems forever so long as you can tax people; that you can get by on decisions that foresee only six inches ahead; and that those who most crave power are naturally equipped to wield it responsibly if they’ve lived long enough its proximity. Then he telegraphs all that again in the epilogue of Dance where Varys shows up, monologues about how he’s been waiting for years for the Lannisters to destroy themselves, and then kills Kevan in what appears to be the final push towards the total destabilization of the kingdoms that Cersei has been unwittingly enabling this whole time.

This is a political thesis that is… dare I say, conservative? At least in the sense that it appears to be genuinely skeptical of power; Martin might truly have written outside himself. In Feast, he has turned a well-meaning, albeit spiteful, maternal protector into exactly the kind of unchecked and incompetent despot that conservatives fear.

But you wouldn’t know any of that if you were going by the show alone. The writers gave Cersei an easy way out by showing how much of a weasel Tommen is after the Faith enters the picture. They presented a one-dimensional conflict with the Faith clearly meant to equate them with judgmental Christians who denounce homosexuals and fornicators. She can only be sympathetic compared to them, especially when a dead Myrcella shows up right after her walk of shame. The show put distance between Cersei and Tommen, tethering him closer to the Faith and making her victim to it. So she gets a Godfather kind of ending that makes for the second most awesome triumph after the retaking of Winterfell.

No abuse of power, no genuine mistakes, no psychological deterioration, no nothing. HBO’s Game of Thrones features a Cersei who is just a scorned, grief-stricken woman that has her vengeance with hellfire.

Perhaps she will become more complex and flawed as Season 7 begins, but until such a time it seems clear that a genuine discrepancy in storytelling exists between the much beloved show and the much reviled fourth book. Game of Thrones is overrated and A Feast for Crows is underrated. You need look no further than their respective treatments of Cersei for proof.

5 Action Movies with “The Last” In Their Titles