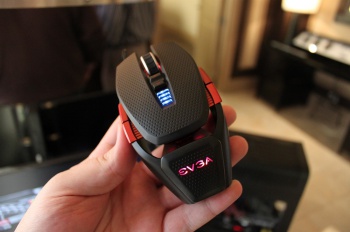 Hardware vendor eVGA is adding peripherals to its lineup.

eVGA is a brand that resonates with DIY PC gamers the world over. They are undoubtedly Nvidia’s closest GPU partner, and their component lines (particularly the FTW-branded motherboards) are coveted by system builders. Now, the hardware vendor is adding peripherals to its portfolio, starting with the TORQ X10 gaming mouse.

The TORQ X10 has a lot of the same internal specs that you’ll find on other current gaming mice, namely Omron switches underneath the buttons, and an 8,200 dpi laser sensor on the bottom. That’s all well and good, but the real differences show on the outside. The body of the X10 is wrapped in real, honest-to-goodness carbon fiber. There has to be some sort of Carbon Fiber Illuminati behind the scenes, I swear, because it’s showing up EVERYWHERE now. But it should make the X10 sturdy and light, two properties you want in an input device.

eVGA has also made the body of the TORQ X10 adjustable, allowing for the body shell to raise or lower via a torx screw on the back. The mouse will ship with the appropriate screwdriver, but it’s something you’ll have in your toolbox (assuming you’re cool enough to have a toolbox. I am.), too.

It’s not all about the body, though; the MIND is just as important, right? The TORQ X10 has memory on-board for profile storage, and all nine of its buttons are fully programmable – make them all left-click, if that’s your brand of vodka. The included software, along with allowing for button control, also acts as an information overlay. If you change the dpi or profile, the appropriate information will be displayed on the screen in red lettering. It sure beats taking your eyes off the screen to make sure you’re hitting the right button.

A longer hands-on is needed, for sure, but the TORQ X10 seems like a worthy first effort from a company that takes gaming and hardware of the PC variety pretty seriously. Look for it “soon,” (release date TBA) with an expected price of $119. There’s a cheaper, non-carbon fiber version in the pipeline as well.

Hands (and Head) On With Oculus VR’s Latest Prototype