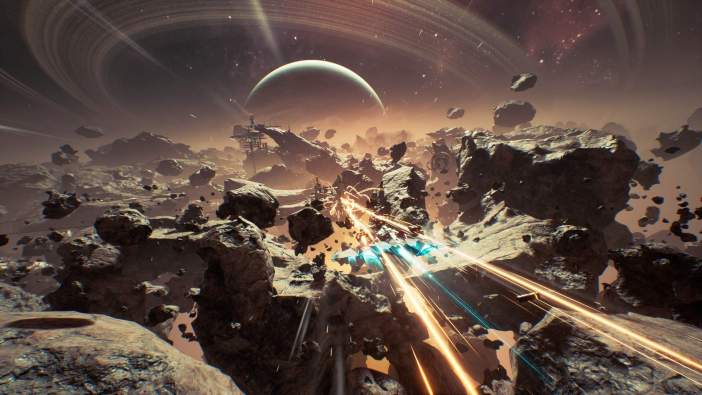 Sci-fi spaceship shooter game Chorus has received a “101 Trailer” showcasing gameplay and a release date of December 3, 2021, for PC, Amazon Luna, Google Stadia, PlayStation 4, PlayStation 5, Xbox One, and Xbox Series X | S. The footage sets up a story where players will play as Nara, piloting and fighting alongside a sentient ship known as Forsaken through a “dark new” universe in a quest for redemption. Chorus looks busy in the best way, with lots of bright action with gameplay that looks like a much darker version of Star Fox. The Chorus 101 Trailer also showcases plenty of large and open areas.

Fitting Forsaken with different customizations factors into how battles will play out. There also seems to be a greater emphasis on story than in other similar spaceship shooter games. For Nara and Forsaken, “Their quest for redemption will take them across the galaxy and beyond the boundaries of reality, as they fight to unite resistance forces against the Circle and their leader, the Great Prophet, at all costs.”

An Xbox Wire post explains how the Xbox Series X | S versions of Chorus feature enhanced visuals, including more detailed ship destruction and environments. It’s probably safe to assume these same visual upgrades will be present in the PlayStation 5 version of the game. Publisher Deep Silver and developer Deep Silver Fishlabs have additionally outlined that preordering the game grants access to the Elder Armor skin set for Nara and Forsaken and a few starting weapons. Otherwise, you can see the Chorus trailer below, which reiterates the game release date.