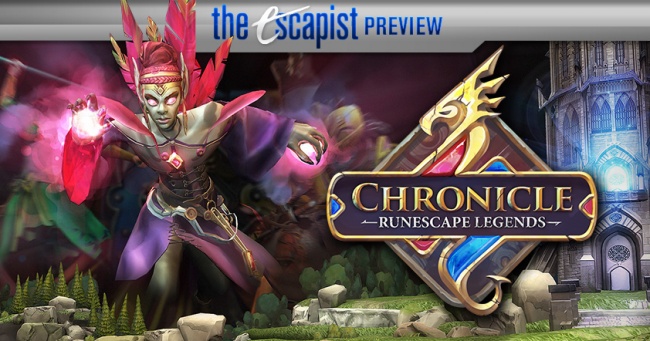 Developed and published by Jagex. Open beta releases on March 26, 2016. Available on PC. Access was provided during a press event in London, England. All travel and hotel expenses were covered by Jagex.

You’d be forgiven for thinking Chronicle was Runescape‘s answer to Hearthstone. It’s a collectible card game where you build decks for RuneScape characters, play minions, equip weapons, and compete against opponents in ten minute matches. Yet even with these elements, Chronicle feels fresh and new. It manages to subtly twist the systems we’ve seen in multiple CCGs into a unique narrative experience – one I didn’t want to stop playing even after my brief time playing.

Chronicle: RuneScape Legends is about guiding Legends on complete, ten-minute campaigns across the RuneScape setting. Players must assemble and play decks of enemies, allies, and power-ups which form your encounters in each region of Gielinor. Where Chronicle differs from most CCGs is you’re not trying to dominate opponents – you’re playing to strengthen yourself. The ultimate goal is to create a challenging, but rewarding adventure which improves your character before they enter a final battle with their rival.

A Chronicle match unfolds over the course of five chapters, each of which lets you play up to four cards. Enemy cards must be defeated in combat, but reward gold, health, or permanent attack bonuses upon victory. Once you earn enough gold, you can spend them on ally and weapon cards which provide bonuses without a combat exchange. The order you play these cards in is crucial – you’ll need a weapon or significant attack bonuses before taking on powerful boss characters. It’s also important to balance rewards from low-level enemies who are easy to defeat with those from strong foes who carve away huge portions of your health.

Your own personal adventure isn’t Chronicle‘s only consideration – there’s also a rival player to account for. Rivals are online opponents who complete the adventure alongside you, and will be your final boss on the last chapter. They’ll fight enemies, upgrade personal abilities, or directly influence your own game. Many card effects can reduce a rival’s gold or health, destroy weapons, and spark brief combat exchanges. This could throw an unexpected wrench into your adventure, leaving you without enough gold to play an ally – or without your weapon just before facing a deadly beast.

Going from its closed beta, Chronicle already hits a perfect sweet spot between PVP and PVE gameplay styles. Surpassing your own challenge cards is immensely satisfying in itself, as are the RPG leveling systems. But Chronicle always keeps you focused on an overarching conflict with a rival who might upset your plans at any time. Even if you don’t play cards against the rival, simply watching their stats increase can be a tense experience. And that’s not getting into incredibly close final battles which can be won – or lost – by a single health point.

Chronicle‘s tabletop-themed presentation certainly adds to the game’s appeal. Each match takes place on an in-game board, where miniatures are moved across its surface. Instead of looming overhead as an icon, your opponent’s avatar literally sits with you at the table, visibly reacting to successes and failures. These are minor touches, but really add a lot of personality to the game, especially in how it lends your opponent a strong background presence.

Needless to say, I was hooked during Jagex’s press event, and kept returning to Chronicle stations at every opportunity. And that’s just the closed beta edition – the open beta promises to include even more features. Chronicle will soon introduce Venescula the Vampyre and Morvan the Slayer Master as playable Legends. The Wilderness Crater and Barrows will be added as new locations. Chronicle will also introduce its Dungeoneering mode, where you’ll create a draft deck from all available cards and see how it fares. The open beta will even feature a huge range of customization options for your Legend figures, covering costume and weapon skins, emblems, titles, and more.

Taken together, there are many reasons to be excited for Chronicle. It’s quickly proving to be a fantastic addition to the CCG genre, and plays like a wonderful mixture of Hearthstone and Hand of Fate to boot. If that sounds promising to you in any way – and it should – you can play the open beta on March 23, 2016.