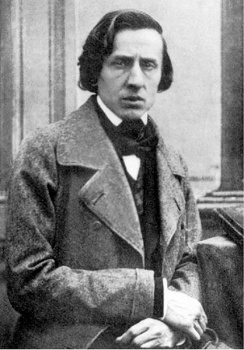 Get ready to rock out with your Chopin out: The Polish composer and pianist is getting a Guitar Hero-style music game to celebrate the 200th anniversary of his birth.

Music Master: Chopin is a new music game being developed by Polish studio Bloober Team. Similar in concept to Guitar Hero and Rock Band, Music Master: Chopin will feature not only classical piano pieces, but also vocal performances and rock arrangements of the composer’s work. The game is currently planned for the PC, Mac, iPhone and iPad, but there have been discussions about bringing the game to consoles as well.

The concept for the game was a winning entry in the “Chopin 2010 – Promesa” competition, celebrating “the Year of Chopin,” and as such the project is being funded by the Polish Ministry of Culture. The developers hope the game will attract the attention of a new generation of music lovers to the works and achievements of the famed composer.

There’s no word whether Music Master: Chopin will ship with a miniature plastic Steinway controller, but I’m hopeful. First screenshots of the game are expected to be released within the next couple of weeks; a planned release date for the game has not been announced.

Not Hardcore Enough to Raise Chickens