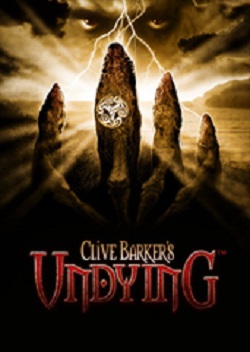 First person shooter month comes to an end with 2001’s paranormal shooter Undying. Written in cooperation with author Clive Barker it drops the player into a dark mystery where they’ll need to use brains, magic and bullets to solve the mysteries surrounding a family curse.

Updated: In the original article I claimed that you couldn’t reload your weapons “on the fly.” A helpful forum poster (thanks SupahGamuh!) corrected me. My mistake was looking through the key bindings and not realized that “Weapon Action” and “Reload” were the same thing. I’ve adjusted the review to be more accurate and I apologize for any confusion this goof-up caused anyone.

Clive Barker’s Undying is one of those games. You know the sort. A friend (or an uncle in my case) recommends it to you and you swear that you’ll try it sometime but you don’t. You get caught up playing other games and it slides to the periphery of your memory. Maybe you remember it every now and then. Heck, maybe you even think about playing it. But you still don’t and deep down you harbor the smallest regret for the game you never found time to play. And honestly it should be a big regret because Undying is a great game with a lot of exemplary qualities.

The story, for instance, is easily one of the best that I’ve seen in an older shooter. Taking place in the early 1920s and written in cooperation with horror writer Clive Barker, it follows Patrick Galloway, a paranormal investigator who returns to his native Ireland to help an old friend uncover the truth behind a mysterious curse plaguing his family. Told via cutscenes and collectible journal entries, it’s generally really well handled and was one of the driving forces that kept me pushing forward even when some of its more tedious elements were pushing back.

The journal entries in particular were something I really loved. Granted, I’m a bit of a sucker for that kind of content. I’ve beaten Resident Evil 2 at least a dozen times and each time I collected all the ancillary documents simply because I loved reading all the bits of back-story the game contained. Undying has tons of this stuff and it all helps to flesh out the characters and plot in ways that make the whole experience deeper, more meaningful and, occasionally, even a bit creepier.

It also has a very firm grasp on its atmosphere. Even with the age of visuals working against it, there were moments in Undying that left me downright chilled. I’d be walking through the mansion and hear the distant scream of a butchered housekeeper or heading down a hall only to have all the lights die out and the music pick just in time for a pack of monsters to drop in and maul me. Put shortly, there are times where you’ll find yourself feeling very much akin to a lone mouse in a house of hungry cats; alone, outnumbered and feeling entirely inadequate.

Sadly, this feeling of suspense becomes some less prevalent the further you advance in the game. Don’t get me wrong, the story is always interesting and it sustains a general creepiness that is to be admired. The thing is, horror in video games very much hinges on feeling less than capable. As Undying progresses you just gain too many assets to maintain that feeling of walking into a room and being unsure of whether or not you’ll make it out alive. In turn, the best parts for me were the earliest hours where you have only your pistol, a few paltry spells and not nearly enough bullets. I still had fun after those feelings dwindled away, but it was the more typical sort of joy that a lot of shooters deliver.

Which, of course, isn’t necessarily a bad thing. In fact, even if you weren’t interested in Undying‘s horror themes, I’d still very much recommend it on the merits of it being a really solid shooter. Looking back on my time with it, there just isn’t much I can complain about. The controls are smooth, your enemies are diverse and it transports you to some pretty varied environments. It also does a really nice job of coupling your standard weapons with spells in interesting and strategic ways.

There was one occasion, for instance, where I started down a corridor only to have a pack of monsters come charging around a corner. Fighting Trigens in Far Cry I could have just gunned them down neat and tidy with an assault rifle. In Undying however, I had to think things through a bit more. The bullets in my pistol weren’t going to be enough to take them all down so I unloaded them into one of the baddies and started falling back, picking off a few more with my spells while I reloaded. By the time they were in striking range, my mana was depleted but my pistol was ready, allowing me to finish off the final few before they clawed me. It was really satisfying to come out of that encounter unscathed and more so, I believe, because I couldn’t just blast my way through it.

Unfortunately, for all that I enjoyed about Undying, there were issues that occasionally dragged it down. Chief among them was just how easy it can be to get lost. I found myself, on more than one occasion, bogged down in areas where I just didn’t know what to do or where to go next. Some of this was, admittedly, the fault of my own inattention. Every once in awhile, you see, you’ll come across a spot that triggers an audio indicator telling you to activate the Scrye spell which can reveal secrets often essential to your progress. The problem is that the indicator isn’t all that loud and, if your volume’s low or, heaven forbid, you date to have a conversation with your wife while you’re playing, it can be easy to miss.

Exacerbating this is the fact that environments can also be a bit too maze-like, especially when you’re indoors. I, for instance, spent more than hour wandering the same small area of a monastery because I kept taking a wrong turn leading me away from the room containing the key I needed to continue. It’s just easy to find yourself wasting time walking back and forth between the same rooms over and over again, which is an especial frustration when you’re playing on a deadline.

This issue is made more annoying by loading screens that are both frequent and poorly placed. There’s no attempt made to conceal or integrate them more naturally into the game. You’ll just pass under an arch or walk into a room and the screen will go black and say “loading” for a few seconds. In the grand scheme of things, there are probably greater sins that the game could have committed. That said, it can be a jarring interruption and a definite mood killer, which is the last thing you want when the game’s atmosphere is one of its finest qualities.

Despite these occasional wrinkles, Undying is well worth the $5.99 that GOG’s selling it for. It boasts a dark and well told story built on strong shooter mechanics that make subtle breaks from the norm to provide an interesting and challenging experience. If you’re like me you passed on Undying back when it first released in 2001. Take my advice that you don’t want to make the same mistake twice.

April is almost here and I’m happy to announce that we’ll be launching a month of strategy reviews starting with Sword of the Samurai.