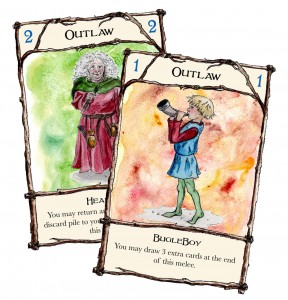 I have a stack of board and card games that I almost never play. It’s a motley collection, ranging from Armageddon simulators to word games, with one sad truth in common: None of them is much fun with just two players. When I was growing up, my family was four people (mom, dad, me, and my brother), perfect for diving into Mille Bornes or Monopoly or Big Deal. Now my family is two people, one cat, and one dog, and while the four-leggers are intrigued by Catan, their lack of opposable thumbs makes it at least moderately problematic for them to join in. (Plus they always hog all the brick.) With just two gamers in the house, my options for non-digital are somewhat limited, and one can only play so much Scrabble.

This is why I was delighted to discover Sherwood Showdown, a card game specifically designed to be played by pairs. The Sherwood of the title is indeed Robin Hood’s favorite hangout, Sherwood Forest, and your goal in the game is to collect as much money as possible by robbing unwary travelers. Each player starts with an identical deck of cards, backed either in green or orange (to help distinguish decks should they comingle). Your deck is your band of Merry Men (and Women), Weapons, and Ransom. Each bandit has a numerical value that can be increased by playing a weapon card and adding its numerical value. Some of the bandits are Leaders with have special abilities; the Fair Maiden is so lovely that that she woos opposing outlaws to her side, the Giant is so huge that defeating him is nearly impossible, and Robin Hood is such an inspiration that he can bring an extra outlaw with him into the fray.

Each round – which is referred to as “the melee” – a new dimwitted traveler ventures into Sherwood (which is to say his card is dealt from the deck of Travelers). Each traveler is worth anywhere from $1 to $11, but players can lay down Ransom cards to bump that up in hopes of taking home a bigger paycheck. The melee proceeds as players take turns laying down Outlaws, Weapons, or Ransoms. You can only play one Outlaw per turn (unless you play a Leader like Robin Hood), and only one Leader per melee. You can only play an Outlaw with a value equal to or higher than the last one your played, but it also has to bring the total of your Outlaws equal to or higher than the total of your opponent’s forces. Your goal is to force your opponent to withdraw from the melee, either because she doesn’t have a valid card to play or because beating you would simply require too many cards. (You can see a more detailed explanation of the gameplay in this handy video.)

Though the mechanics of the game are simple, maneuvering through the melee requires a surprising amount of mental dexterity as you weigh when to push for the win, when to bluff, and when to stage a strategic withdrawal. As with most card games, victory depends not only on sound strategy, but on having the right cards in your hand when you need them, but Sherwood Showdown adds yet another layer of strategy by letting you spend some of your hard-earned booty on fresh cards. At any time, you can trade in one of your Travelers for a number of cards equal to its face value. Cash in a pricey $11 Traveler and you’ll almost assuredly have enough ammo to win several hands, but the winnings you rake in may not trump your initial investment.

The give-and-take of Sherwood Showdown is as much about knowing your opponent as it is paying attention to the cards they’ve played, which is what makes it such a fun game for couples to play. Do they make bold, risky moves, like dumping a load of Ransom on a few expensive Travelers to get a few huge paydays or are they more prone to scoop up a bunch of low-rent Travelers because every buck counts? The best Sherwood Showdown players are thinking several melees ahead, keeping track of the cards still in play and leaving wiggle room for bad turns of luck. It’s satisfyingly strategic without being too cutthroat, thanks to the whimsical setting and inspired artwork of the cards (illustrated by none other than Heather “I make Shamus look good” Young).

Plus, you get to yell “Stand and deliver!” and make jokes about a buck-and-a-quarter quarterstaffs. Which I do.

You can pick up the game here.