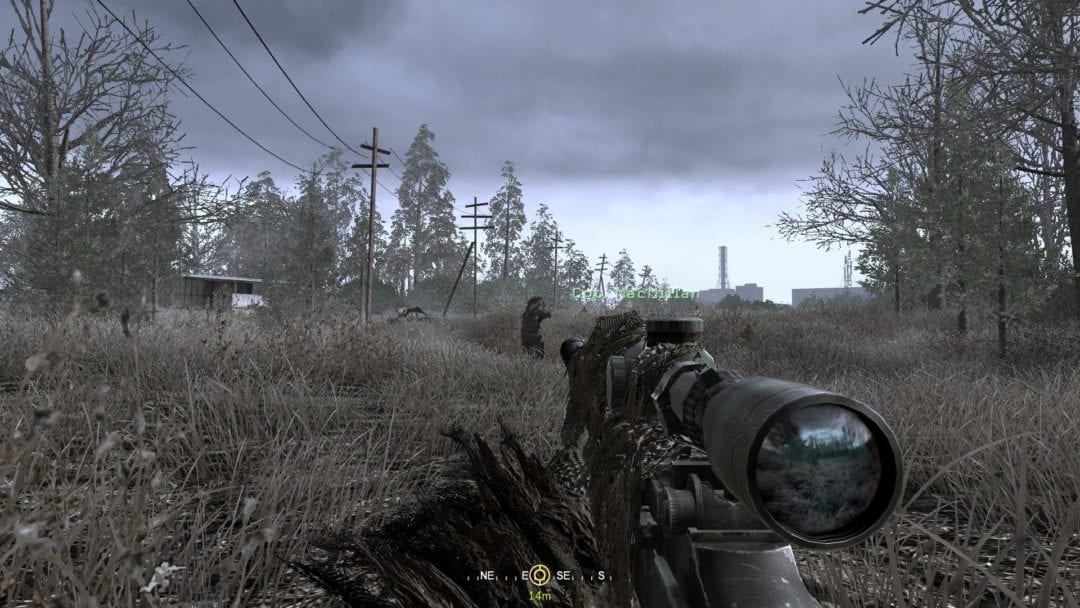 (If you missed parts one and two, you can catch up here and here.)

In addition to gutting duty and performing highly-scientific tests to determine whether or not a game disc could be resurrected, I also learned how to shrink wrap games. If you’ve ever bought a game at GameStop and suspected that the shrink wrap around your game was not the factory-sealed original shrink wrap, that’s because it probably wasn’t.

The shrink wrap machine in our store was in the stock room. Though the idea of sealing plastic around a game box might sound like alchemy, shrink wrapping technology is incredibly crude. Our machine basically consisted of a roll of plastic wrap and a super-charged hair dryer. You can go online right now and buy a shrink wrap machine and shrink wrap to your heart’s content.

Here’s how to shrink wrap: The roll of shrink wrap is double-layered. The bottom and left sides of the wrap are already sealed at the seams. What you do is this: You slide the game box into the plastic from the right. The bottom of the metal arm gets hot. You swing the now-hot arm down to seal the plastic over the top of the game box. You rotate the game box 90 degrees and swing the hot arm down to seal the right side of the box. Once the box is sealed, you take the super-charged hair dryer and point it at the plastic-covered game box until the plastic shrinks to a point where it fits snugly.

At first, I was really excited to learn how to shrink wrap. I felt like I was learning some kind of trade secret, like how to roll back the miles on a used car or something. But the shrink wrap machine is the most underwhelming thing in the world. And shrink-wrapping duty is almost as dull as gutting duty. Only the danger of burning myself with the supercharged hair dryer kept shrink wrapping from being dull.

The rest of the employees in our store were pretty much in my age group, with a direct correlation between age and responsibility, position, and salary. The catch-all, entry-level position – my position – was referred to in GameStop speak as “Game Adviser.”

Beyond the Game Advisers, there were three managers: the Store Manager, the Assistant Manager, and Senior Game Advisor, who we also referred to as the “Third Key”, since he was the third person with a key to the store.

The thing I noticed during my time at GameStop is that everyone – Game Advisers, Assistant Managers, Third Keys, etc. – were always coming and going. Retail workers in general are a restless, nomadic tribe. Retail is never a destination for reasonable people.

The Store Manager is the lone exception. They’re usually in it for the long haul. (Chris definitely was.) Everyone else was either heading to college soon, or between jobs and/or careers, or moving soon, or getting married soon. The only real benefit of working in retail is that it’s easy to get in and it’s easy to get out. If you’re working in retail and you don’t have a long-term goal, no matter what it is, you’re probably either nursing an alcohol problem or contemplating suicide. Or both.

To my surprise, we were never given any sort of crash course in video game knowledge. When it came to games, we were always on our own. I relied on what I knew already, and to a lesser extent, on what I learned while doing the job. This is why so-called “fanboys” always make for the worst kind of GameStop employees: They only know what they like, and they can’t possibly fathom a customer’s personal wants or needs.

One afternoon a woman in her 40s – let’s call her “Soccer Mom” – came into the store to buy Call of Duty: Modern Warfare for her brood. Not the most kid-friendly choice, of course. But Soccer Mom’s problem wasn’t whether or not the game was appropriate for her kids. Her problem was that she wasn’t sure her kids would actually like the game.

I recommended that she play it safe and buy the used version of the game, not the new version. “You can always return a used game to GameStop within seven days for any reason, even if you simply don’t like the game,” I explained.

This is true. At least it was true when I worked there. When you do bring the game back, the Game Adviser behind the counter will always try to get you to exchange it for another game. But if you can resist his Jedi mind tricks and simply say the words, “No, thanks” a few times, they’ll always give you your money back. Always.

Soccer Mom, to my surprise, frowned at me and said, “I don’t buy my children used games.” Fine. I rang her up, and bagged the brand new copy of COD: Modern Warfare for her.

Not more than an hour later – I honestly could not believe my eyes – her mini-van pulled up out front. She came back into the store.

Soccer Mom: “My kids didn’t like this game at all and I’d like to return it.” She placed her copy of Modern Warfare, now without shrink wrap, down on the counter.

Me: “You want to return the game?”

Soccer Mom [visibly agitated]: “Yes, I want my money back.”

Me: “But I explained to you a little over an hour ago that once you open a new game, you can’t simply return it. I offered you a used copy of the game that you could have returned. But you refused it. I can’t give you your money back.”

Soccer Mom [loudly, so everyone in the store could hear her]: “Ugh! I spend HUNDREDS OF DOLLARS here. I’M NEVER SHOPPING HERE AGAIN.”

At this point her face turned a furious shade of red. She stormed out of the store and – I could not believe my eyes yet again – dramatically spiked the game into the sidewalk. Then she picked up the game, got into her mini-van and drove away, her tires squealing.

An hour later the phone rang. It’s Soccer Mom. She’s still angry. She asked for my District Manager’s phone number. “And I want your name, too,” she said snippily.

The next day I got a call from the District Manager. I told him the whole story, even the part about the game-spiking.

“I understand that’s the company’s policy,” he said. “But you still should have taken the game and refunded her money.”

“Soccer Mom said she felt like you had scolded her in front of the whole store,” he said. “She left feeling embarrassed.” This, I would learn, is what happens whenever a customer calls a District Manager with a complaint. District Managers never deal directly with people like Soccer Mom, so they always bend over backwards to appease the customer whenever someone complains.

What the District Manager allowed Soccer Mom to do was this: He allowed her to return the now-opened Modern Warfare for a full cash refund, but she insisted that she be allowed to return it to a different GameStop because she didn’t feel like she could “deal” with me anymore.

I hung up the phone beside myself with anger. I stepped outside the store, trying to cool off. I spotted the ding on the sidewalk where Soccer Mom had spiked Modern Warfare. The District Manager had thrown me under the bus in the name of appeasing a crazy person.

Maybe working in the Post Office in a remote part of Queens wasn’t so bad after all.