When I was a kid, riding the bus from the school to the local swimming baths so that we could all humiliate ourselves in front of our pitiless teachers, there was a fanciful game I used to play. I’d imagine that the bus was actually a great big simulator, with sophisticated 3D view-screens instead of windows. Instead of being driven to the baths, they were making us think we were being driven to the baths while a team of workmen busily changed all the outside scenery. For what reason? I had no idea. Possibly just to fuck with my head.

I’ve never really grown out of that mindset. I’ve flown between the US, the UK and Australia umpteen times, but I don’t consider myself well-traveled. I didn’t see much of the intervening places. From my perspective, I was in one place, then I sat in a big metal room for twelve hours playing Mario & Luigi, then I was in another place. For all I know, everywhere I’ve ever been is just over the next hill and there’s some massive conspiracy to hide from me the fact that the entire world is about ten miles across, and to make me sit in uncomfortable chairs drinking vodka tonics for ungodly amounts of time. Anyway, the point is, that’s what Mass Effect 2 reminded me of.

As Douglas Adams once said, with his usual spectacular insight, space is big. It’s so big that any story you set in space immediately gets an epic sense of bigness about it, just by virtue of being next to all that big. In theory, anyway. My main problem with Mass Effect 2 was that I didn’t really get that bigness feel. It felt like every location in the game was within easy walking distance of each other.

Here’s how you get around: you start off in your spaceship wearing casual gear, then you go to the navigation desk. There you pilot a miniature version of your ship around a little train set-sized galaxy and dock it in one of the dockable locations. Then fade out and fade up on your character in body armor sauntering into the new location, where (s)he will presumably partake in some angry conversations and gunfights. And once you’ve finished your missions, we fade out and fade up on the ship again, back in your slippers and future space pajamas.

See, for all I know the Normandy is docked in a garage somewhere, and all the locations I can visit are all set up in a big warehouse around the corner. For all I know my character is slipping into a coma whenever he uses the navigation console and everything off the ship is a fever dream. For all I know this is some Killer7-style arrangement – the Normandy is actually some bizarre astral realm, Pajama-Shepard is some kind of overseeing god-like entity, and Armor-Shepard is his corporeal avatar. You see what I’m saying? There’s little sense of physical connectivity between any of it, and that hurts the immersion.

Now, when I was a kid, I used to play Frontier: Elite 2 on my Amiga 600, and I would get embarrassingly into it. I didn’t even understand half of what was going on, but I could spend hours flying through the physical space between stations, exploring the universe. I used to rock back and forth in my seat whenever I banked to simulate the movement. And whenever pirates blew me up I’d hurl myself off my chair yelling KABOOM. Now, Frontier had an awful frame rate and was composed entirely of untextured polygons, but I got so shamelessly immersed because the action never cut away. You could descend from space to a planet’s surface and land manually, or dock in a rotating space station 2001-style. No fade-outs skipping the parts of the journey you didn’t have to watch – a constant physical transition from A to B. That’s what I mean by connectivity. 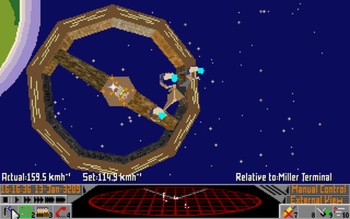 I’m not saying Mass Effect 2 needed full-control first-person space flight. I’ve never been a fan of genre-mixing, and I doubt the RPG audience and the flight sim audience have much to say to each other. I’m just saying I needed more context. In Mass Effect 1, rather than fading straight from the navigation screen to the location, you’d have to walk to the airlock door in your ship and click on it to go outside. And that’s literally all it needed. I saw myself come up to a door, then I saw myself come out of the ship into the docking bay. My mind makes the unconscious connections by itself: I am this man, I was on this ship, I went out the door, now I am in the Citadel, therefore my ship is docked in the Citadel. It creates a natural flow that Mass Effect 2 lacked.

The other thing ME1 did, of course, was let you take the horrible space buggy down to explore random planet surfaces, which frankly I could take or leave, but again, did go a long way to create the necessary sense of bigness. Then of course they stripped that all out in ME2 to make way for poking at planets with sticks from a safe distance, noting down whatever we found on our space clipboards. Oh, who will step up to the plate, strip the bureaucracy from space games, and give me full space flight control with actual space adventure whoosh blasty fun?

I trust no one thought I was being flippant two weeks ago when I pledged to make a space game. I have indeed been messing with Unity3D. I find the best way to learn a new design tool is to have a big project in mind, then start making it as soon as you can, looking up manuals and tutorials every time you reach a gap in your knowledge. So I’ve dived right into Fun Space Game: The Game (working title).

I wrote in my post-Silent Hill 2 XP column about how embracing your limitations can help the creative process, and my skills are nothing if not limited. I definitely do not have the programming knowledge to make dogfight AI, so there’s not going to be any. Instead, I’m forced to think in terms of a space game based more around evasion and stealth tactics. I find myself inspired by those little fish that swim really really closely behind sharks, so the sharks don’t notice them and the fish can nibble on whatever scraps the shark leaves un-mauled. I like the thought of being a tiny scrappy little ship flying alongside big monster vessels and space stations, shooting down individual turrets or key weak points, or flying through a trench in the middle of the ship Luke Skywalker-style to blow up the monster’s heart and give it indigestion.

The other thing is that traditional flight sim controls are a little clunky and unstable for the kind of fine movement I have in mind (or at least that’s what I’m telling myself), so I’m sticking to something more FPS-style. Rotate with the mouse, ascend and descend with the equivalents of Jump and Crouch controls, kind of like how swimming works in a FPS like Quake. I already have the movement engine working and I made a skybox that I hate. I found a tutorial that helped me make a better one in Blender, which I also used to make an asteroid that I hate.

This really is a project that intrigues me. I intend to give quick updates here in this column whenever there’s anything to report, documenting the creative process in this small way for as long as it takes for me to get bored and move onto my second novel or whatever. Watch this space.

Sony: No PS3 Install for God of War III