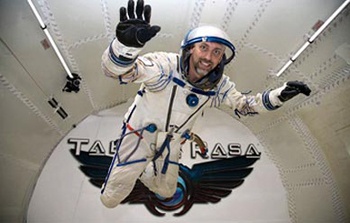 As a child devouring all the science fiction she could get her magic-marker stained hands on, I dreamed of someday making the journey into space. I longed to travel between stars, to explore the unknown, to, well, let’s be honest – to boldly go where no man has gone before. Now, thanks to a moderately ridiculous and utterly nerdy publicity stunt, I’m finally getting the chance. I’m going into space, but it’s not quite the way I had imagined it. For one thing, it involves far more spit.

When legendary game designer Richard Garriott heads off to the International Space Station this October, he’ll be toting along the dramatically-named Immortality Drive, which will be crammed with all sorts of digital information, including the character data from everyone who’s ever played Tabula Rasa, private messages from the TR community, and the results from a poll about mankind’s greatest achievements. It’s a blatant, if incredibly creative, plea to generate interest for his sci-fi themed MMOG Tabula Rasa, which has received a fairly lukewarm reception from the greater gaming audience. Silly? Of course it is, but you must admit, it’s certainly more attention-getting than giving away hoodies emblazoned with the game logo.

The Immortality Drive will also contain the digitized DNA of the “brightest, most talented minds today,” which, thanks to what I can only conclude was some sort of enormous clerical error, includes me. The idea is that should aliens wipe out the human race – not coincidentally, an event that serves as the backbone for Tabula Rasa‘s story – we will be able to rebuild humanity from the genetic information stored on the Drive. I’m not sure that using my personal building blocks as the foundation for a new civilization is in humankind’s best interests, but I am stoked, nonetheless. I, or at least a small part of me, is going to fulfill my lifelong dream of travelling to the stars, of being somewhere other than the Earth.

When I heard that my own little double-helix would be collected and sent soaring skyward, I envisioned a visit to a gleaming white lab and the ministrations of a highly-trained scientist in a spotless coat and mask. What I got instead was a package full of Q-tips and a return envelope. As I ran the swabs across my cheek (horizontally, in a back and forth motion, as per instructions), I realized two things. First, someone should really look into making flavored Q-tips. Secondly, this space stuff was decidedly less sexy than my steady diet of science fiction had led me to believe.

I knew sci-fi didn’t present an accurate view of what space travel was like – the “fi” stands for “fiction,” after all- but surely it wasn’t really so…mundane, was it? Aware that my romantic notions of life among the stars hung in the balance, I nonetheless resolved to discover the truth of the matter. Finding myself without a single astronaut on my speed dial or Facebook friends list, I turned to the one person I knew who might be able to restore my vision of space travel to its previous romantic glory: Richard Garriott himself. Not only does the man own an actual Sputnik (yes, there was more than one), Garriott’s father, Owen, was an astronaut on Skylab. If anyone had a love of the stars, I figured, it would be General British, but I soon learned that loving space and being romantic about it were two very different things.

Garriott has spent most of the last year undergoing various types of training for his October trip to the International Space Station. Last year, he did a lot of medical and psychological prep work; since January, he’s been in Moscow for more hands-on training. Some of it has been fun, he says, like the simulated weightlessness of zero g training. Other exercises have been somewhat less enjoyable, like the spinning chair training, which makes pretty much everyone who tries it puke like they’ve been on a three-day tequila bender. 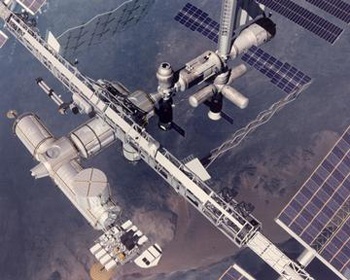 Mostly, though, Garriott has been learning how not to get himself or anyone else killed. As he puts it, “There’s a surprisingly large number of ways to kill yourself or be injured in space.” The threats to space travelers was, I thought, a topic upon which I was exceedingly well-versed: Rogue asteroids colliding with your craft and venting all but three hours’ worth of oxygen, the ghosts of shipmates who’ve been sucked into alternate dimensions coming back to haunt you, spatial anomalies that will trap you in a time loop, shipboard computers that suddenly turn homicidal, and let’s not forget the various ways alien life forms are out to get you. I quickly learned that my years of research had failed me yet again. The easiest way to kill yourself in space isn’t to explore a derelict freighter before you’ve properly translated its distress call, General British explained. The easiest way to do yourself in is simply to take a snooze.

When you sleep on Earth, the carbon dioxide you exhale is lighter than the oxygen around you and so floats upward and away from your face. In space, there is no such thing as up, so if you’re not sleeping in a well-ventilated area, the carbon dioxide will simply hang there in front of your nose and mouth, waiting to be sucked back in again. Stay in that position long enough, and your catnap can quickly turn into a dirt nap.

Of course, you might just freeze to death first. The ISS’ sleeping quarters only has space enough for two; the remaining crew members have to strap up their sleeping bags wherever they can find room. Garriott had originally planned on sleeping in out-of-the-way airlock alcove that provided a bit of privacy, but was warned that it might not be warm enough to keep him from becoming a Britishcicle.

Space, it would seem, isn’t sexy. It’s cruel and unforgiving, making the most mundane of activities into life-threatening events. Who needs black holes or Kodan armadas when simply sleeping in the wrong part of the hallway can seal your doom? Space, I discovered, isn’t interested in your drooling desire to be part of it. Space has never heard of Flash Gordon, the Nostromo, John Crichton, or the Yamato. Space doesn’t care that you grew up with visions of tribbles and daggits dancing in your head. Space demands respect, and will coldly punish those who don’t provide it.

In all likelihood, my digitized DNA, along with the rest of the Immortality Drive, will gather dust in some forgotten corner of the International Space Station until an astronaut does some spring cleaning and shoves it out an airlock. That doesn’t mean I’m any less excited about the opportunity, though. I can travel to the most exotic, far-flung corner of the globe, someplace no human has ever set foot, and I’ll still be just another Earthling, glued to the surface of the big blue marble. My DNA, on the other hand, will be out among the stars, in a place that’s wild and strange and full of the unknown. Space my be dangerous and intimidating, it might have no qualms about killing you while you sleep, but it’s still the final frontier.

If the aliens do come and wipe us off the planet and we’re forced to start anew, I can only hope that Future Susan is wise enough to give space the respect it deserves without sacrificing her sense of wonder and awe. I also hope she has four arms and cybernetic implants, because that would be wicked cool.