I love videogames, I really do, but every now and again I feel the need to get completely away from them for a short while. I was really looking forward to a trip to DisneyWorld with my girlfriends not only because it promised to be a weekend full of fun, frivolity, and general silliness, but also because for the first time in perhaps years, I would be nowhere near anything having to do with videogames. Little did I know that I was about to join an MMMMG – a Massively Multiplayer Mickey Mouse Game – complete with quests, NPCs, and loot.

I hadn’t been to DisneyWorld in more than a decade, and quite a bit had changed in my absence. There were new rides, new parks, new shows and new characters. There also seemed to be a new souvenir of choice – enamel pins. They were absolutely everywhere; on snack carts, in our hotel lobby, on lanyards around the necks of the cast members, everywhere. There were even entire shops devoted solely to pins. I didn’t quite get it – I’m more of a t-shirt or ball cap person, myself – but if people liked pins, hey, whatever. I browsed the racks, saw a few I thought were cute, bought one or two I particularly liked, and didn’t think much about it.

Then I saw the book.

We were on our way back to our hotel rooms to change for dinner. We had to cut through the hotel’s gift shop to reach the elevators, and as we passed through, I saw the cast member behind the counter pull out an enormous notebook stuffed far past capacity with page after page of pins. A young boy on the other side of the counter peered intently at them, carefully considering a page’s contents before delicately moving it aside to look at the next batch. He finally removed a pin from his own lanyard, handed it to the woman behind the counter, and pointed at a pin in the book, which she accordingly removed and handed to him. What the hell was going on here? I had to know.

It turns out that several years ago, the Disney Parks started selling collectible sets of pins, but then took the brilliant step of instituting an official trade system for them. If you see someone wearing a pin you want, you can ask them to trade, at which point the two of you can then haggle over the price — I’ll give you my Donald Duck for a Tigger, a Jack Skellington and a player to be named later. Of course, they don’t have to trade with you if they don’t want to, which is where the cast members (Disney employees) come in. Cast members must trade with you when asked, a straight one-for-one swap. The one exception is cast members with green lanyards, who can only trade with children.

A smart system from a company that’s already a genius when it comes to separating people from their money, but to add just that extra bit of addictiveness, Disney cleverly took a page from the MMO playbook and assigned color-coded rarity levels to the pins. Green is the most common, Lavender the most rare. You can buy pins of every color, though the more rare it is, the more expensive it is. But there are also hidden sets, cast member exclusives, limited editions, and on and on and on. By simply picking up a few souvenirs at the gift shop, I’d unwittingly stumbled into a quest for epic loot. After years of gaming, how could I possibly refuse? 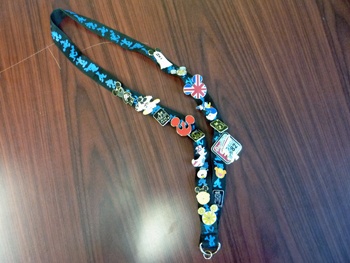 I started off slowly. I bought a starter lanyard which came preloaded with several low-level pins. I traded away my first pin for a Tigger pin that caught my eye. The cast member I traded with chided me for trading for something of such low value, but he didn’t understand – value is in the eye of the beholder. I don’t care if you have a +10 Pin of Ultimate Goofy, I want what I want. Then I traded for a Donald Duck that I hadn’t seen in a shop. Donald was always one of my favorite characters, and the pin was really cute. A ride or two later, I traded for a similar Donald pin on another cast member, who informed me that the Donalds were part of a four-piece set. Wait – are you telling me I’m already halfway to a complete set? If you looked closely at that particular moment, you probably would’ve seen “Quest Received” floating above my head.

Fortunately, my companions, let’s call them Red, Numbers, and Skippy, are wonderful women – gamers themselves – who were ready to back me up. They didn’t just tolerate my quest, they helped me with it, scanning cast members for PoIs – Pins of Interest. Numbers began keeping a Log to keep track of the quests we were receiving from the cast members – or NPCs as we’d come to think of them. The Great Donald Hunt was, of course, the Main Story, but we had sidequests, too. Oh, Doctor, My Doctor had us searching for a pin of Dr. Bunsen Honeydew wearing mouse ears, Pin of the Dead was our quest to track down a zombie Mickey pin, and There Be Mouses Here was our search for a pirate Mickey pin.

I bought more pins to act as trade bait, and my party members helped me scout the racks for particularly intriguing high-level tidbits. We gained experience. We leveled up. We became savvier traders and more adept at spotting desirable pins. Our trade skill became mighty.

One particularly memorable exchange occurred on our way into the Star Tours ride. The ride is on a set schedule; if you don’t happen to make it on while it’s being loaded, you’ll have to wait a good twenty minutes for the next run. There was nobody in line, but the ride was only about thirty seconds away from starting. We were running up the impossibly long walkway that led to the ride, hoping to slide into the seats before the doors closed. Numbers was in the lead, far ahead of me, and as she ran past the cast member who was monitoring the doors to the ride, she turned back to me and shouted, “Honeydew! Honeydew!” I began removing a trade pin as I pounded up the path, mere seconds left to make the exchange. Fortunately, this NPC was on the ball, and had Honeydew waiting in hand by the time I reached the top of the ramp. We swiftly made the exchange, I jumped through the door and fell into a seat just as the door to the ride was closing. Let’s see a newb try that maneuver.

Sadly, I had to leave the MMMMG with several quests left incomplete, but I did depart with a lanyard full of loot. It’s hanging on the wall in front of me as I write this, a colorful reminder of my time spent raiding in DisneyWorld. Others may not get why a collection of random pins makes me smile, but those of you still questing to get that last piece of rare armor…I think you understand.