In our Escapist On video about horror in games, I (and everyone else featured) said that people enjoy horror games because being scared in a safe way can be a lot of fun. Tapping into that adrenaline rush in a way that doesn’t actually threaten you is, after all, pretty exhilarating, but that’s only part of why my videogame library is jammed full of games designed to give you the willies. I keep returning to horror games time and again because they offer an opponent that other games don’t: me.

The point of any game is to overcome a challenge or obstacle, and in most games that obstacle is given a physical form. It’s a dragon you have to slay, a terrorist leader you have to track down, a demon you have to destroy, a computer virus you have to wipe out. Whatever other trappings a game may offer, its core almost always boils down to You vs It, but in the case of horror games you’re actually facing two enemies: whatever Big Bad is trying to do you harm and your own instinct to survive.

Take something like Silent Hill. In real life, if you ever found yourself in a mist-covered town inhabited by shambling, faceless nurses and giant wasps, the first thing you’d do is turn and run, but that’s simply not an option in the game. You must keep playing. You must press on. To turn back is to fail, not only because it means abandoning your daughter to a horrible and mysterious fate, but also because it defeats the entire purpose of playing the game in the first place. So you keep playing, fighting both the increasingly disturbing environment and the voice in your head that keeps shouting at you to get the hell out of there, now.

You could argue that any game that puts your life in peril does the same thing, but I don’t think that’s necessarily true. A guy with a gun may be dangerous, but he’s a concept you can wrap your head around. His threat is one you can quantify – bullets plus fleshy bits equals ow – and so the fear he creates is manageable. Because you understand him, you know, or at least can take a reasonable guess, how you can defeat him and survive the encounter. Horror games, on the other hand, present you with an enemy that’s not so easy to sum up. It’s a thing, a force, a something that adheres to rules and laws completely other than the ones you know, rendering the total of your accumulated knowledge to that point completely moot. The life experience you’ve used to stay alive – stuff like physics, chemistry, even good old fashioned common sense – is now worthless. If there’s anything more terrifying than that kind of naked helplessness, I don’t know what it is. 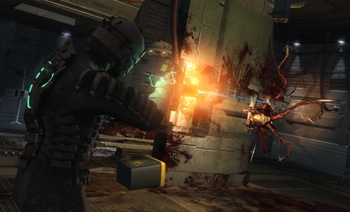 Self preservation is a pretty powerful motivator, so horror games typically give you an equally emotional goal to counter it. In Silent Hill 2, you’re trying to find your wife (your dead wife), in Condemned, you need to clear your name, in Fatal Frame, you’re searching for your missing brother. The ensuing battle of emotions – your need to survive versus the guilt you’d feel for abandoning your goal – provides an undercurrent to the game’s tension that’s so subtle you don’t even realize it’s there. The immediate peril of surviving demands so much of your attention that everything else gets shoved off to the side, where it’s free to quietly infect your psyche without threat of discovery.

Dead Space goes one step further by pitting your survival versus your survival. To make it off the Ishimura alive, you have no choice but to keep moving into its depths, repairing the ship’s vital systems. Yet the further you go, the more horrifying and deadly the trip becomes, putting your emotional survival instinct at odds with your logical survival plan. To live, you must put yourself in harm’s way, a paradox so unsettling that it leaves you constantly off balance, unable to mentally stabilize yourself in preparation for whatever horror is sure to come next. That kind of emotional manipulation takes the quick frights you get from the sudden appearance of Necromorphs (or, worse, their refusal to come out into the open) and chains them together for increased impact.

All of this depends on a certain frame of mind, of course. In much the same way that hypnotism won’t work if you’re fighting it, games won’t scare you if you’re not willing to take the journey with them. Even when you are willing to meet them halfway, maintaining a mix of atmosphere and gameplay that won’t yank you out of the experience is incredibly difficult. One bad line of dialog, moment of unfortunate collision detection or uncooperative camera is all it takes for the carefully-crafted illusion to be shattered and for you to be unceremoniously thrust back into your living room. Fear is an uncomfortable and unpleasant state of being, so your body and mind will seize any opportunity they can to fight against it. Ever find yourself laughing hysterically after narrowly avoiding a traffic accident? Same idea.

But when it does work? When the mojo is running hot and everything comes together? That’s when you find yourself staring down your most dangerous opponent and, hopefully, living to tell the tale.