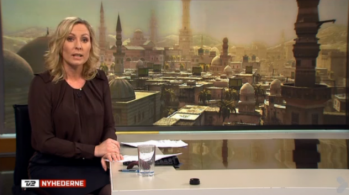 Damascus is a beautiful city, but Assassin’s Creed isn’t a true representation of its current state.

A Danish television channel managed to mistake an Assassin’s Creed screenshot for modern day Syria, and used it in a news broadcast. When social media channels began questioning its source material, head of news Jacob Nybroe swiftly apologised for the error.

The full piece, about the threat posed to Syria’s cultural treasures by the ongoing violence in that country, can be seen over here. The screen’s about 17 seconds in; apparently someone working for the channel, in need of a quick screen grab, used it without checking its origin. Damascus is one of the oldest continuously inhabited cities in the world, and can be very picturesque; but perhaps not quite that picturesque.

Nybroe described the incident as a terrible mistake, and “reminder to us all of the importance of verifying the sources of pictures.”

The Time I Created Things in San Andreas