Mark Foster and David Fenn — the two-man development team known as Acid Nerve — created a game called Titan Souls during the weekend-long Ludum Dare game jam #28. They never imagined that just six months later the game would be showcased at E3 and then published by Devolver Digital less than a year later. In their projects that followed, a quick prototype and iteration process became the norm for Acid Nerve, so what happens when you give them three and a half years to work on just one game? The answer is Death’s Door, which was announced at the ID@Xbox showcase.

“We spent a lot longer planning (Death’s Door), rather than just doing a three-day game jam… Other than that it was just a similar experience, just scaled up,” said Fenn, musician, sound designer, producer, and director at Acid Nerve. Foster, the studio’s programmer, designer, and director, shared the same view, describing the creative process for Titan Souls as “the same as (Death’s Door) in terms of that we start with a simple idea and then we try and see what different things you can do with that idea.”

In the case of Death’s Door, said idea was to expand upon the Zelda formula, which is a considerably larger source of inspiration than the one-hit kill concept at the core of Titan Souls. “The Titan Souls idea, it was a very, very tiny thing to expand upon, so it was a really honed game,” said Foster. “(In Death’s Door) you’ve got more different directions you can take it in, so we just did a load of different things we thought were cool with that kind of formula.”

Having extra time to experiment also allowed Acid Nerve to make the shift from 2D pixel art to a fully 3D game. “We wanted to just take it up a notch,” said Foster. During the early phases of development, Fenn revealed that a lot of prototypes were created by external animators. “One of the things we ran into was that it just wasn’t as fast as we were used to,” he said. “I feel like as a team, we really rely on fast prototyping and fast iteration.”

Considering Acid Nerve’s game jam background and with more development time on their hands, the duo decided to apply their “do it quick” philosophy to the animations. “Mark basically just started doing his own prototypes and taught himself to rig and animate,” said Fenn.

The result of Foster’s prototyping are the adorable animations we have seen in the announcement trailer. However, despite the cute exterior, the world of the Crows is bleak and focuses on the concept of death. According to Fenn, this juxtaposition between the characters and their environment is exactly what makes Death’s Door a charming experience: “I think the cute and positive elements help you with your motivation in the game, because we don’t want you to be dropped in this world and just be like, ‘Oh, I have to overcome this monumental horrible experience’… I feel like the contrast does make each thing stand out as well, like if it was all dark, then you wouldn’t feel as much about the things that are dark about it.”

Fenn’s soundtrack helped to establish this distinct tone early on in the development process. “We had main themes on all this music way earlier than anyone normally would, which I suppose probably did help with setting a vibe early on,” he said. “When we started adding art to the game, then the artists had quite a wealth of music to be able to listen to as soon as they started.” As much as the music inspired the direction of the art, the same could be said of the art inspiring the music. Fenn added, “There would be times where we’d have art, and then I would make a new track because I felt like the art provided a good unique vibe.”

Along those lines, there are many characters we are yet to meet, which is something that the team is excited for players to experience in-game. “We’ve introduced the Crows in the main office, but there’s characters in the main game world as well and I just want to see people react to them,” said Fenn. He also said that “there’s some (characters) that if people do cosplay, it’ll be amazing!” Based on the key art for the game, it is easy to understand why.

Another element of the game that Acid Nerve is excited for players to discover is the secrets hidden within Death’s Door. The team attributed the inclusion of these hidden features to the extra time they had to plan and develop the game. “We’ve got all these little fun touches that we thought were never going to make it in, and then some big secrets as well… so we’re pretty happy in that regard,” said Fenn. “We have been quite ambitious and we probably should have been more sensible in some places, but we’ve managed to pull off some cool stuff.” 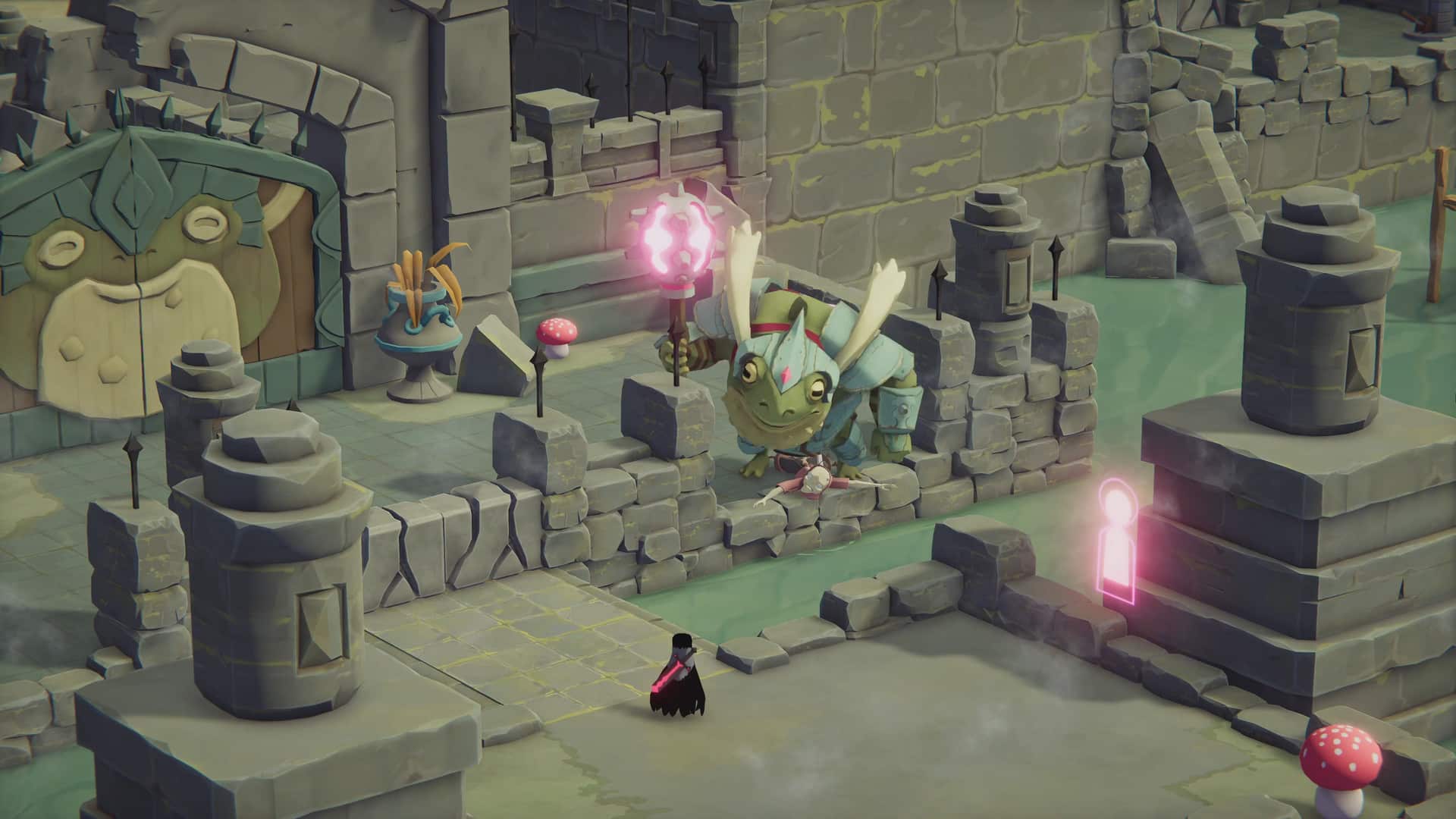 Given the role that doors will play in the game, I was curious as to whether one of the game’s more overt secrets was the potential that Monster’s Inc. had inspired the concept for Death’s Door. “Subconsciously, it must have,” said Fenn. “I remember we brought in someone to help us out, developing the story, the script. And one of the first things he said was, ‘You know, your game, it’s just Monster’s Inc., right?’ I realize, ‘Oh yeah, it kind of is.’” He laughed.

While Death’s Door may not be directly influenced by the classic film, hints of the emotional weight and gorgeous atmosphere that Pixar films are known for are shining through, even in the short trailer. The unusually long development period for an Acid Nerve game has given the team the opportunity to be bold and experiment with unique ideas that have been fully realized thanks to some exceptional planning.

Death’s Door is set to release in summer 2021 on PC, Xbox One, and Xbox Series X | S, and based on the passion and creative focus of the Acid Nerve team, this is a game that you should definitely keep on your radar.