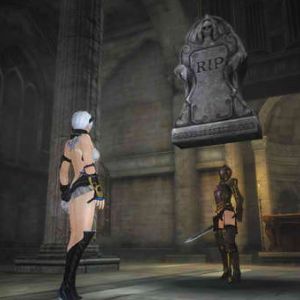 The Deception series has always been fascinating, if nothing else. Not exactly a critical darling, the line of games is often criticized for repetition and failing to switch up its formula between sequels, but fans love the sadistic satisfaction it provides. Luring would-be heroes to their doom is never not fun, at least in theory, and Deception IV: Blood Ties has no intention of changing a thing.

The story goes that the Devil broke off a piece of himself and turned it into his daughter, because that’s what you do if you’re the Devil. This half-naked child of the damned, Laegrinna, sits in her castle with three equally nude demon girls, planting rumors of witchcraft among mortals in order to lure brave heroes to their lair. Once there, Laegrinna coaxes them into a series of tricks and traps, indirectly murdering them and taking ancient relics to fulfill her father’s plan.

They also all have massive boobs, and Laegrinna in particular wears a costume with a split down the back designed to show off her butt cleavage. I am yet to work out the logistics or tactical advantages of such clothing, but one cannot understand the mind of Satan.

As with all games in the series, Deception is a strategy game in which you place traps and attempt to make enemies walk into them. Traps often push, pull, or throw their victims across the grid-like map, allowing you to place more traps in the landing zones and create an intricate chain of grisly punishment – provided you planned it out well, and predicted some of the less reliable traps’ behavior.

As a game centered on setup and payoff, Deception IV swings wildly between immense satisfaction and pure frustration. When everything works as intended, there are few more elating things – it’s simply joyful to catch an enemy in a beartrap, holding it in place so a giant yoyo can smack it into the path of a swinging scythe, which in turn kicks the hapless fool into the path of a falling boulder. The possibilities are numerous and gleefully painful.

There are multiple trap types, from floor-based grabbers to ceiling-mounted spikes, and they come in three distinct flavors – Elaborate, Sadistic, and Humiliating. Each theme is governed by one of Laegrinna’s skimpily clad demon assistants, and confer unique point scores upon the player when triggered. Elaborate traps are useful for strategic purposes, usually based around shunting enemies about and chaining together combos. Sadistic traps are where all the scythes, spikes, and other nasty weapons are kept, while Humiliating traps often confer status ailments and making the enemy look silly.

There are environmental traps as well, from electric chairs to oncoming trains, and chaining a trap sequence that leads an opponent into them is a great way to score points and deal huge quantities of damage. It’s quite difficult to pull off, though, often requiring insane timing and more than a little luck. When the stars align and a plan comes together, however, the joy is palpable. 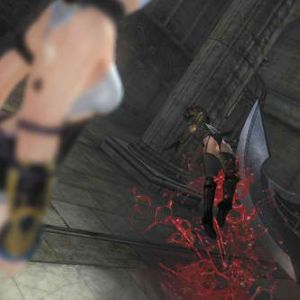 All that said, when your best laid plans are scuppered, Deception manages to be a thoroughly disheartening time. Some traps don’t reliably place enemies where the map icons claim they will. Nailing the timing of some traps (they need to be manually activated just as the enemy is in the right place) can be difficult, especially when one cannot predict if the opponent will continue to walk slowly or suddenly sprint toward Laegrinna. The game is also far too fond of knockdown attacks that make you prone to another attack while you’re trying to get up, and sometimes the environment’s own traps are annoyingly easy for the player to accidentally trigger.

Boss fights in particular can be a pain to deal with, as well as combinations of enemies with immunities to certain trap types. While on paper, specialized enemies lend an element of strategy to the game, in practice they just limit what you can do and enforces strict repetition. If you end up with only two or three effective traps in your repertoire, well, you’ll only be using two or three traps over and over again. Boss fights come down to nailing the one trick that works, laying a single trap sequence down in each room, and then running in circles until it’s over.

At its worst, Deception IV is an unbearable game of disappointment and repetitive procedure, and it’s hardly surprising that it has so many critics. However, it’s hard not to find all the irritation worth it when you nail that one perfect combo, something that gets easier to do when you start unlocking a wide variety of traps.

The game’s narrative quirks are also humorously stupid. While the story itself is fairly banal, the fact that every single NPC, even the cannon fodder, has some sort of overly dramatic backstory is something I find thoroughly delightful, and while some may take offense at the amount of inappropriate semi-nudity, I found it more charmingly stupid than galling. The fact you can destroy an opponent’s armor to reveal they’re wearing a bikini underneath is just dumb, and you can at least strip males equally down to their tighty whities.

There’s a ton of content to boot, provided you don’t get exhausted by it all. As well as the main campaign, which I got way too tired of, there’s a free mode for some fuss-free malevolence, as well as feature in which you can build your own levels and share them online. There are tons of traps to uncover, as well as some special skills for Laegrinna (such as healing or dodging in battle), and costumes. Costumes for the showcasing of boobs. Because boobs.

Bottom Line: Utterly stupid and often frustrating, Deception IV: Blood Ties is one of those games that manages to be enjoyable in spite of itself. It’s a “bad” game, by most standards, but it’s good in that “not good” way.

Recommendation: If you like ridiculous things and have a lot of patience, this can be quite a rewarding experience. Just be prepared to work for it.