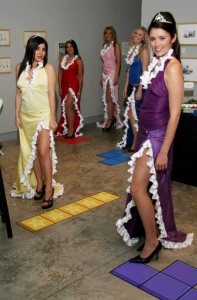 It’s a Friday afternoon, and Scott Foe is in a hotel room, 27 floors above the streets of San Francisco. In two hours, he’ll be unveiling his latest project to the press. It’s billed as “the highest production value mobile title ever.”

From the man who produced Pocket Kingdom, the first MMO for mobile phones, that’s a promising statement. “We spared no pixel, we spared no sound,” he’ll joke later that evening. But right now, he’s brushing his teeth.

For the past two conference seasons, Foe has had to refer to the game under it’s codename, “Project White Rock.” Tonight, the actual title will be revealed to the press: Reset Generation.

Walking down Mission Street, Foe enters the Cartoon Art Museum – a gallery space for comics and newspaper cartoons, currently being transformed into a venue for the night’s party. There’s a bar, a stage, a projector, sound equipment and even some old arcade machines.

“It’s named for the children who grew up with computers and videogames,” Foe tells the audience in his opening remarks about Reset Generation. “These children have a certain disposition such that they feel they can just reset things when they mess up. They feel that every situation can be won. And every person in the first-world under the age of 37 has played videogames. It’s now part of the culture.”

After the welcome reception, Foe explains that the game’s developers wanted to pay homage to everything that came before, even as they were giving gamers something new. “We have 10 heroes pulled from the halls of high-score fame.” Plumbers, princesses, cyborgs, hedgehogs. “We have Level 50 elves, and we have pixelated aliens from outer space bent on taking both your women and your quarters.”

“And,” says Foe, “we’ve got them all in the same title.” He introduces each one of the 10 heroes by detailing the backgrounds of their creators – a range of talented artists from the worlds of gaming, cinema and comics.

Music sets the tone for the entire game, Foe continued, “and we’re doing an homage to videogaming. After considering a number of famous videogame music composers, the team decided to find someone who truly loved videogame music, not someone who was simply doing it as a job.”

Seth Sternberger, frontman for the band 8 Bit Weapon, told the audience: “I have to say, being a fan of gaming from both the golden age of gaming and computing, being involved in a project like this is truly a dream come true. You all know they don’t put 8-bit videogame music in modern videogames today – they just don’t do it – but here we are …” 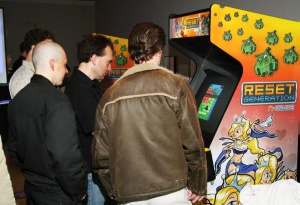 Moving on to gameplay, Foe notes the title has an astounding amount of content. “We wanted to pay homage not just to characters, but to gameplay mechanics, and that’s a real challenge.”

“How do you make a game about games? Blocks, bombs, characters, rescuing princesses,” it was a challenge, but one that Foe jokes he was happy to share with Red Lynx, the Finland-based developer of Reset Generation.

The game they developed is, in fact, cross-platform for the PC and the Nokia N-Gage platform. “You can play on the go, or in your home,” explains Foe.

The game has a story mode, and each of the 10 characters is a part of that story. The gameplay itself is simple. Every player is a hero, every player has a princess. Players lay down blocks from a birds’-eye view, trying to rescue opposing players’ princesses, while protecting their own princess from their opponents – “an homage to classical gameplay mechanics.”

He demonstrates how a level works in the campaign mode, and the audiences laughs at the appropriate, amusing voice acting. “Where this game really shines is online. Four-player, multiplayer, and it is frantic, and it is fun.”

There are global rankings to show the top 10 players in the world, a friends list, and then a list of people who are simply near your location. Foe mentions “N-Gage Points” and says they’re like Xbox Live points.

For a spontaneous demonstration, two of the developers whip out their cell phones while a third uses a laptop hooked up to a projector. They proceed to smoothly join a game and start battling each other as the audience watches the screen.

Foe details the community features for the game, which is slated for a Summer 2008 release. Then the press is invited to get their hands on Reset Generation. Some play, some watch. They switch places and trade positive impressions.

Throughout, Foe stands ever ready to point out some detail, to answer any question or to quickly demonstrate a feature. At the end of the night, and after the development cycle has finished, the creator of Reset Generation still enjoys playing his game.

8 Bit Weapon gives a rousing performance from the game’s soundtrack. And then the party is over. The clean-up crew gets to work, while a handful of journalists and developers stand around discussing what they’ve just witnessed, and what it means.

“It’s definitely a triumph,” says Scott Foe as his interviews wind down for the night and he’s ready to cross the street to a club where a chilled bottle of champagne is waiting to be opened in celebration. “We’ve definitely planted the flag.”