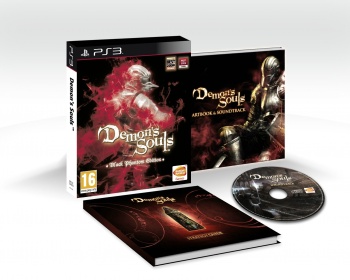 Europe will finally be graced by the presence of one of history’s most challenging RPGs.

European videogame players, your demon worshipping has been rewarded. Namco Bandai officially announced today that it has teamed up with Sony to bring From Software’s Demon’s Souls to Europe, the Middle East, Africa, and Asia Pacific regions.

Despite critical acclaim from releases in both Japan and North America, and big sales, this trek has been a long time coming for Demon’s Souls and was often rumored to not be happening at all. Now, not only is the hardcore action-RPG making its way to many new countries, but those countries will also be getting what seems to be the game’s ultimate edition.

The version to be released is called the Black Phantom Edition and will come with an artbook, soundtrack, and a strategy guide Namco Bandai is calling “new,” meaning it will likely differ from the one North American purchasers got in the Demon’s Souls deluxe edition released to them. The packaging is also a little different, and appropriate, showing off one of the game’s often challenging red-colored phantoms. It’s being promoted as a limited edition, so pre-ordering would be a very smart move.

Demon’s Souls is one of the most unique games to be released in this generation, when games seem to be getting much easier to appeal to a wider audience. Demon’s Souls embraces its crushing difficulty, and makes death less of a frustration and more of an expected gameplay mechanic. Okay, death can still be pretty frustrating, until players discover each area’s shortcuts anyway. The Demon’s Souls: Black Phantom Edition will come to Europe on June 25, 2010, and is a PlayStation 3 exclusive.