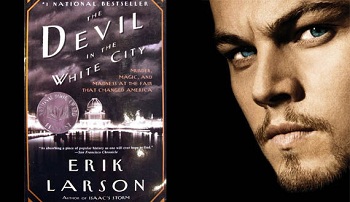 After years stuck in development hell, it appears that Paramount Pictures will finally move forward with the Leonard DiCaprio-starring, Martin Scorsese-directed Devil in White City.

Given the immense (and at times, absurd) success of the Saw franchise, you’d think the true-to-life story of a serial killer who built a “murder castle” would have been greenlit for a half dozen films, a remake, and a line of incredibly dark Happy Meal toys by now (horror films oft live-and-die by the “based on actual events” tagline attached to them, after all.) Yet ever since Erik Larson released his novel, The Devil in White City, back in 2003, the film adaptation has more or less sat on the shelves, bouncing between studios, stars, and directors — with everyone from Tom Cruise to Kathryn Bigelow being attached to the project at one point.

But now, at long last, one of the most disturbing works of nonfiction ever written may finally be headed to the silver screen, and we have Leonardo DiCaprio to thank for it.

DiCaprio, who purchased the rights to Devil back in 2010, has seemingly convinced Paramount Pictures to move ahead with the story based on prolific serial killer H.H. Holmes, and better yet, he’s brought on a somewhat prolific director (and frequent collaborator of his) to man the helm. The Hollywood Reporter … um … reports:

“Paramount, after having acquired and let go of the project twice before, has scooped up the project, with DiCaprio on board to star, Scorsese to direct and Billy Ray to write the script.”

Set amidst the infamous 1893 Chicago World’s Fair, The Devil in White City tells the story of two men: Daniel Burnham, the architect tasked with constructing the “White City” within Chicago wherein the World’s Fair took place, and H.H. Holmes, a serial killer who used the fair to lure tourists into a homemade “murder castle” complete with gas chambers, hanging rooms, and acid pits he had spent years elaborately constructing. While Holmes was only convicted on four counts of murder, his actual kill count has been estimated in the hundreds.

Holmes was equal parts Jigsaw and John Wick, essentially, and it would be hard to find an actor capable of channeling his manic intensity better than the guy who nearly cut his hand in half while filming Django Unchained. So pray with us, horror fans, that this project actually sees the light of day.

What Satoru Iwata’s Legacy Can Teach Us About Inclusive Cosplay