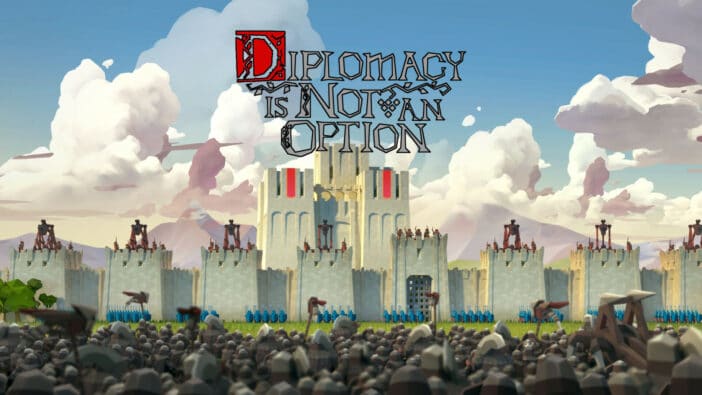 They come in a seething gray mass, dirty, ragged, upset about something to the point of pitchforks. To paraphrase Garth Marenghi: peasants, peasants, peasants. And bits of sick. The sick due to the dead bodies I forgot to clean up the last time a wave of disaffected farmhands broke itself upon my battlements. Or was it the wave before that?

The amusing cutscenes in Diplomacy Is Not an Option inform me that the rabble at my gates are put out by my tax collectors, apparently fed up with the fact that I lord it up in a giant castle at their expense while they eek out their existence in hovels and look like something that crawled out of an orc pit. However, as the game’s title suggests, there is no room for negotiation, particularly when indiscriminate slaughter of thousands of civilians is this much fun.

Diplomacy Is Not an Option sits somewhere between an RTS and a light-touch city builder with a tower defense mode – Age of Empires meets Stronghold and They Are Billions. Early on it encourages you to collect wood, food, and stone and to build houses to raise the population cap, but it also asks you to pay attention to your city walls and defenses and to put in place a few more “civically” minded structures, like a graveyard and a hospital. Further on, you’ll be mining iron, building farms, taverns, markets, workshops, and universities to speed up the game’s research tree.

It’s a game that leans into my favored style of play in an RTS: focusing on base-building and defenses over aggression and offensive tactics. It’s complemented by a pleasantly blocky art style that works well with the game’s deadpan humor. Diplomacy Is Not an Option might market itself as a peasant-hating simulator, but as with many such things, it’s really a sly commentary on the excesses of the rich and powerful and their detachment from the squalid reality of their social order. The jokes might not be up to par with the sardonic tone of Blackadder or the radicalized peasants in Monty Python and the Holy Grail, but it’s always clear that the cycles of excessive violence against the world’s most downtrodden aren’t being played straight. 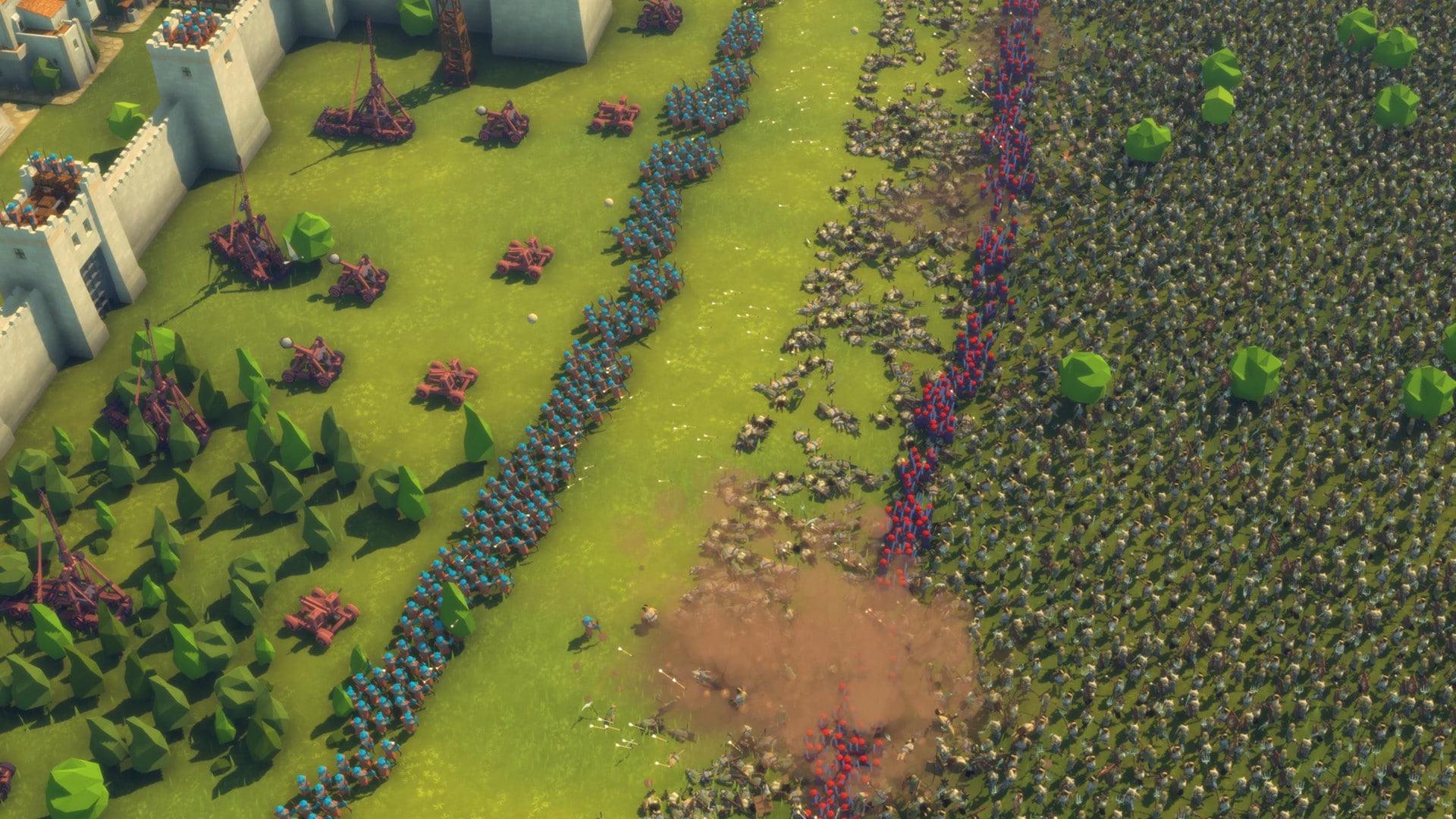 It’s just as well, since those cycles make for a moreish loop of expanding, consolidating, and then watching growing hordes of enemies crash against your city walls in scenes reminiscent of The Lord of the Rings. The hordes start off gently: a few dozen grumpy peasants that are easily dispatched by swordsmen and archers. But even in the first campaign mission, things escalate quickly.

Diplomacy Is Not an Option told me I’d killed 1,222 peasants just in my first hour with it, and it’s a completely different story in the sandbox-style Endless mode. Here the enemies quickly graduate from poorly organized wielders of farm tools to burly rebels with scythes, zombies, and other fantasy genre staples. It takes stone walls, trebuchets, large armies, and the game’s light-touch magic system – a mix of aggressive spells and summons – to stay on top of the action. It’s at times remarkable, particularly given the game’s diminutive 950 MB install size.

As Diplomacy Is Not an Option enters early access, at present its main fault is balancing. Things can escalate too quickly, and it can be difficult to recover without some quite involved micromanagement of your population. Troops, builders, woodcutters, miners, fishermen, the farmhands who inexplicably aren’t involved in the peasants’ revolt, and many others are all drawn from the same population cap. Every day your population grows by a certain number, up to the cap. As the city grows, so does that daily number. Forget to build enough houses, and you won’t benefit fully from the daily influx. Expand too quickly, however, and your food supplies won’t cope. Reassign too many citizens to food production and suddenly you’ll find yourself short of resources. 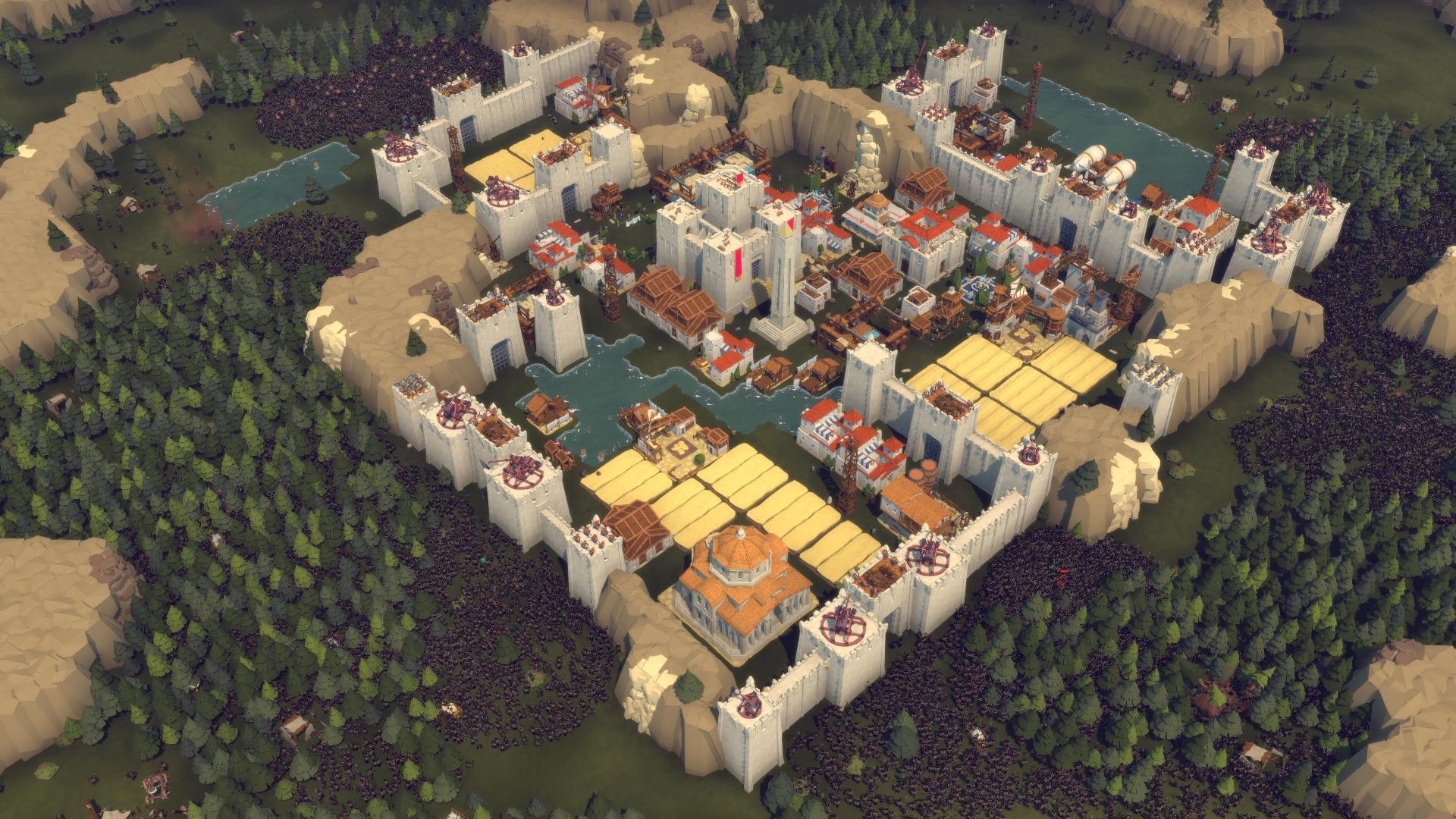 It’s a clever system that is satisfying to balance, but that balancing can quickly turn to panic clicking. There are three speed settings and you can pause the action altogether, but mistakes can pile on top of each other too quickly for these settings to turn the tide. Besides, in the heat of the moment, it’s easy to forget that they are there.

Instead, you will find yourself frantically trying to make enough room in your population to boost your troop numbers, only to completely run out of supplies minutes later, while facing the approach of another wave of attackers. The game marks where they will come from and how soon, but you quickly discover that it mainly works to add to the sense of pressure. Since you have no idea how large the next wave might be, or what the full terrain looks like unless you’ve fully explored the map, it’s difficult to predict exactly where and how much damage they might do.

It’s just another reason to hate those damnable peasants, of course. Not only are many thousands of them busy revolting, but the ones that stay faithfully in your service can’t seem to manage themselves at all. If it weren’t so much fun watching them get flung into the air by catapult fire and explosive spells, one might question feudalism as a social system altogether.