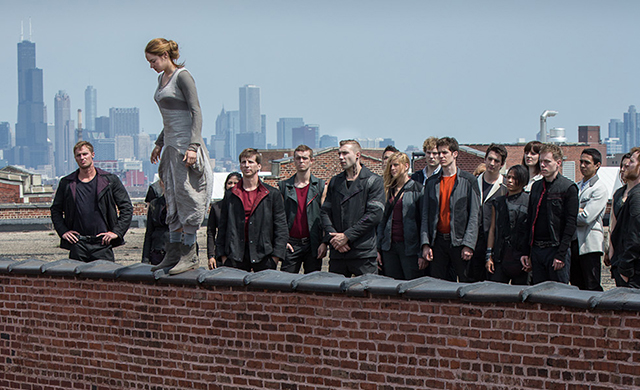 I try to give Young Adult Fiction (and, to a lesser extent, movies based on the same) a wide berth when it comes to formula and cliche. By definition, it’s unlikely that their target audience has had the life experience (or time) to experience a cultural backlog sufficient to notice lack of originality. While one can debate whether or not they deserve better, this has kind of always been true.

By now, it’s getting pretty hard to ignore just how lazy the genre has become. I understand that “retrofit overused sci-fi/fantasy setting into an obvious metaphor for adolescence and/or the American high school caste system” is a proven formula. But would it kill these authors and filmmakers to at least feign a desire toward sticking out from the pack – especially since that’s so often the ham-fisted moral of their needlessly-overlong multivolume claptrap?

Case in point: Divergent adorns its skeleton of “Dystopian YA Sci-Fi” formula with so little in the way of new ideas it makes The Hunger Games look like Cloud Atlas. The bald-faced obviousness of its “Our Crummy Future = Your Crummy High School Life” is so lacking in self-awareness the Harry Potter series’ absence of pretense in simply being set in a school feels retroactively brazen in comparison. 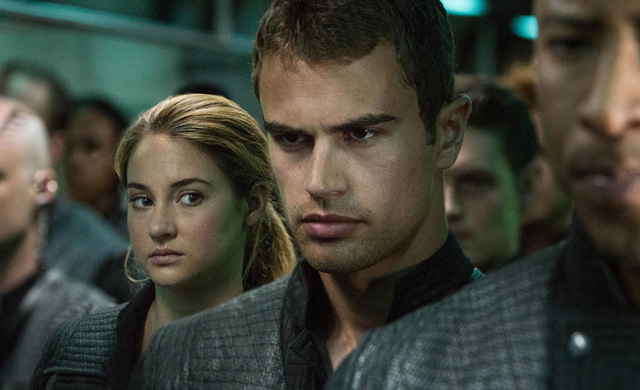 Our setting: A post-apocalyptic, mostly-ruined future Earth where the only documents to survive The Fall were apparently an Archie Double-Digest and a DVD of She’s All That. Protected by a mile-high electric fence around the ruins of (I think) Chicago, the last outpost of humanity has been organized into a five-faction caste-system based on somebody’s hazy memory of High School cafeteria seating. You can be a Nerd, Jock, Farmer, Lawyer or Gandhi. Yes, they have actual names, but pretending that the cheesy “Because it’s the future!” naming-schemes in these things are worth committing to memory is a courtesy I can no longer indulge. Divergent‘s sole stab at novelty is that this time (SPOILER!) the good guys are The Jocks and The Nerds turn out to be the villains.

Our heroine is Shailene Woodley, aka the new Jennifer Lawrence. (Man, we’re burning through “Conventionally Attractive Yet Approachable Chicks Who Still Seem Cool And Like They’d Totally ‘Get’ You” fast these days, huh? Has anyone checked up on Emma Stone at the Old Folks Home?) She plays “Tris,” who was born Team Gandhi but dreams of being Team Jock because they get to learn extreme sports and do all the soldiering and policing. Regardless of heritage, y’see, as soon as children in Generic Dystopia #4,273 reach the age they can engage in Young Adult Sexytimes without squicking out the audience they get a medical test that will determine which caste they’re best suited to…

…and then immediately go to an entirely separate ceremony where they can just pick whatever allegiance they want regardless. Um, what? So why even have the first test? If all it does is function as a blunt metaphor for guidance counseling and/or the SATs then why make a big secretive thing out of it instead of just peeing on an applicator or something? 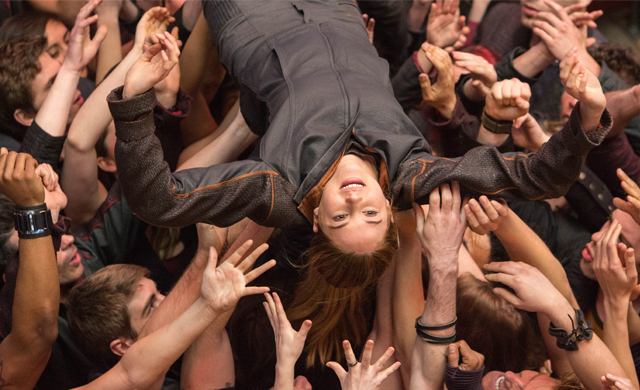 The answer, of course, is plot-specific: Tris’ test comes back inconclusive, a rare occurrence that marks her as “Divergent.” That is, someone who (gasp!) doesn’t fit neatly into any of the established factions which are somehow treated as rigidly-defined despite having established that anyone who wants to can join regardless of background. Well, whatever. Tris pledges Team Jock anyway, but must keep her non-conformity a secret because Divergents’ potential for multiple skill sets makes them a threat to The Social Order somehow.

See how easy this hogwash is?

MOVIE: “Have you ever felt like you didn’t fit exactly into the adult world’s expectations of you and that society was just so much crushing conformity and phoniness that you can totally see right through and want no part of? Because if so, that means you’re actually The Chosen One!”

AUDIENCE: “Why, yes! Because what you just described is called being a teenager – OMG! This story… is about meeeeeeeee and how my self-centered, hormone-driven sense of angst and isolation is actually what makes me The Most Specialest Person Ever!!!!!”

The bulk of the plot involves Tris going through Team Jock (okay, fine, they’re called “Dauntless,”) training sequences ripped wholesale from Starship Troopers, Ender’s Game, etc while forging relationships with supporting characters patiently waiting for their arcs to start mattering in Book II. Chief among these is Ansel Elgort (poor guy) as Sexy Love-Interest Trainer, Zoe Kravitz as Black Friend and an unfinished fetal-clone of Joseph Gordon-Levitt Miles Teller as Not Draco Malfoy. Her main conundrum is avoiding detection by acing her trials Dauntless-style (read: through punching) rather than by situational multitasking – which is apparently the big important super-power of Divergents even though we’ve already established that a ton of these people change life-direction in their mid-teens so a varied skill-set shouldn’t be remotely surprising to anybody.

This all drags on uninterestingly until she and Sexy Love-Interest (who is also a Divergent and has abusive daddy-issues as a bonus) uncover an evil conspiracy by the leader of The Euridites (“Team Nerd”) to use mind-controlled Dauntless troops to massacre Team Gandhi and usurp the government. Since Divergents are immune to mind-control (why?), it’s up to them to save the day in a boring shootout. Kate Winslet sleepwalks through a glorified cameo as the bad guy, looking like she regrets waiting so long to have finally joined the rest of her Respected British Acting brethren in collecting one of these easy Hogwarts Faculty paychecks.

The laziness of the setting and script extends down to the rest of the production. Hunger Games, at least, bothers to greenscreen its cast into somebody’s idea of the future – Tris and company are left running through cheap sets and cheaper ruined-city locations, pausing only to ride a zipline for no reason. For a movie about escaping from conformity, Divergent has a complete lack of interest in veering away from formula.