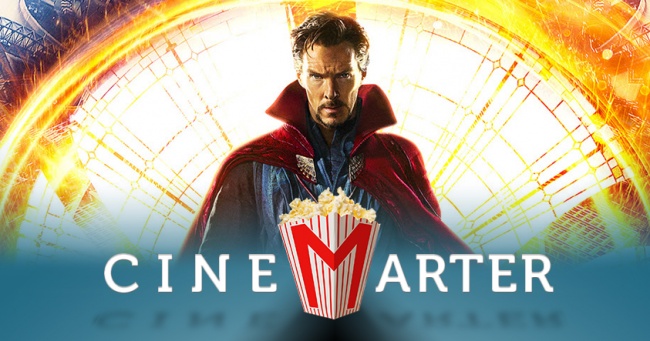 The special effects are the stars of Doctor Strange, the latest movie in the Marvel Cinematic Universe (MCU). This one stars the eponymous Doctor Strange (Benedict Cumberbatch) who becomes a wizard after a car accident and some training from the Ancient One (Tilda Swinton). Beyond that? There are lots of training scenes and eventually the clan he joins goes to fight some baddies. I felt like I’d previously seen everything narratively that Doctor Strange had to offer. It was mostly the visuals and decent action that kept my interest.

First, a bit more of the plot. Steven Strange is a neurosurgeon who drives distracted and winds up in an accident which more or less ruins his hands. He tries out many different therapies, but to no avail. However, he eventually hears of the Ancient One and her group who healed a paraplegic. She shows him how to use magic, gives him the famous cape, and he becomes a superhero – maybe a little too quickly and easily, but whatever. Yes, it’s another origin story, and yes, it’s another one in which the details have been switched around but the basic template has remained the same. 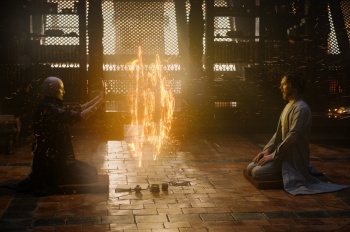 And no, before you start, that doesn’t mean that Doctor Strange is bad or not worth watching; it’s just an acknowledgement that, while Disney/Marvel has found a formula that works, it might be time to start changing things up on a deeper-than-surface level. I mean, this one deals with magic and alternate dimensions, in addition to various ideas that could fundamentally alter the MCU, but it has to adhere to this relatively rigid structure, prohibiting sufficient exploration. There’s some of that here, and I have little doubt we’ll go deeper as the Doctor Strange brand expands, but it left me wanting more.

However, we’ve got great visuals, decent action, and enough laughs – if you’ve seen most of the other Marvel movies, why would you expect more? The visuals take center stage, ranging from Inception-style folding buildings to abstract and surrealist art brought to life. Even without a whole lot going on, all this stuff looks great and is more than enough to keep your attention. Sometimes the effects are used in combination with the action scenes, which make them feel unique in the context of this huge franchise.

Doctor Strange has fantastic special effects, interesting characters, and engaging ideas – but all in service of a relatively bland story.

The main supporting cast is interesting, particularly when it comes to the Ancient One, her second-in-command, Mordo (Chiwetel Ejiofor), and the librarian, Wong (Benedict Wong). They make for engaging characters on their own and most of their interactions with Strange are enjoyable. We don’t learn all we need to about them – we need things left unexplored for the sequel(s)! – but there’s enough. The same can’t be said for Strange’s on-again-off-again girlfriend, a fellow surgeon named Christine Palmer (Rachel McAdams), who comes across like a knockoff Pepper Potts and probably could have done with at least five more scenes.

It should be noted that, unlike most of the post-Avengers films, Doctor Strange basically doesn’t have anything to do with the bigger Marvel picture, save for one of its credits scenes and one of the plot’s MacGuffins. If it was released in Phase One, it probably wouldn’t have felt out of place. That’s different, I guess. These things usually feel like building blocks constantly stacking on one another to get higher; Doctor Strange feels like an aberration in this regard. Not that that’s a bad thing, mind, but it just feels odd. Or, well, strange.

Applying a fresh coat of paint to a narrative structure we’ve seen time and time again does enough to make for an enjoyable movie, but not a great one. To transcend to that level, Marvel is going to have to step up its game. Doctor Strange has fantastic special effects, interesting characters, and engaging ideas – but all in service of a relatively bland story. It doesn’t explore all of its ideas to the point of satisfaction, but it leaves you wanting more. There’s enough action to keep you watching, and setting it against a backdrop of amazing visuals makes it more impressive. Superhero fatigue may be setting in, but something like Doctor Strange will pacify audiences for now. Marvel will eventually have to start switching it up but, for now, this will suffice.

Bottom Line: The first Marvel film whose visuals are its strongest point, Doctor Strange does just enough to switch up the pieces in its formulaic story to be worthwhile.

Recommendation: You probably already know whether or not you’re going to see Doctor Strange. But if not, you might as well go.

Grab the Deep Learning & Artificial Intelligence Introductory Bundle for 91% Off