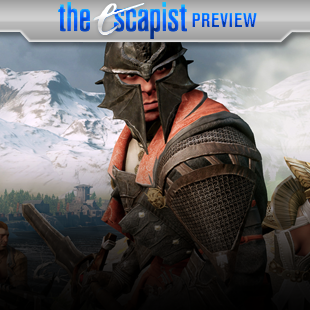 Dragon Age and I have quite some history together. If you’ve been on the site long enough, you’ll know that I’m unabashedly a huge fan of the Baldur’s Gate series – and even that might be an understatement. So back in the early 2000s, when it became known that BioWare was going to be making a spiritual successor to the franchise, I was just a little bit excited. I ate up every bit of preview coverage available for Dragon Age: Origins and sunk even more time into the game itself. I still remember getting the “Easily Sidetracked” reward for doing most of the sidequests before I had even ventured to Orzammar in my first playthrough. Easily one of my favorite games in recent memory, and then there was Dragon Age II.

Granted, I didn’t think Dragon Age II was that bad. BioWare is still the best in the business when it comes to developing interesting and entertaining companions, but I certainly had my disappointments with it. The moment I keep coming back to was where Hawke and party were exploring what was supposed to be a mountain where no one ventured and I was really intrigued to spot a camp setup in the caves. I ran over expecting some little interesting journal entry for why someone was up here, but there was nothing. The camp was just a recycled asset.

This has perhaps made me not as vigilant in keeping up with developments of Dragon Age: Inquisition. The trailers have looked decent and I had heard that it was going to feature larger environments, but despite that promise I just hadn’t been following it that closely. Until this preview event the only live gameplay I had even seen, let alone played, was the tail end of Greg Tito’s session at E3 before we filmed an interview.

First up, as typically for RPGs, was character creation and thankfully it’s back in full form. While you won’t get to select a specific origin, you’re free to choose from the three classes, warrior and rogue are subdivided here as well, and four races provided. The qunari finally join the ranks of playable races along with human, dwarf and elf. Facial customization is suitably impressive with all the little fiddly bits of adjusting everything from cheek bone depth to facial tattoos. Though while I do greatly enjoy Dragon Age: Inquisition‘s aesthetic of being the half-way point between the style of Dragon Age II and the more gritty look of Dragon Age: Origins, I do admit that I find something subtly uncanny about the faces in Dragon Age: Inquisition, but I haven’t been able to put a thumb on what exactly.

You’re then promptly thrust into the world of Thedas, which frankly is going to shit around you. After the events of Dragon Age II, the mages and Templars have gone from a seething hatred of each other to flat out open warfare. You commonly come across groups of them fighting each other when traversing the maps. I don’t want to spoil too much of the story, but the event that prompts the characters to form the Inquisition also neuters basically any chance for someone else to peacefully resolve the dispute. It’s all on your shoulders now. 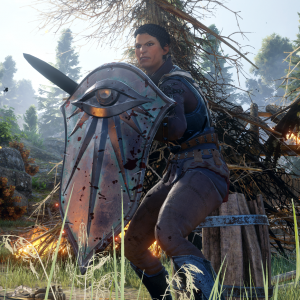 Dragon Age: Inquisition puts even more emphasis on the political machinations and power struggle across the Dragon Age universe. In addition to going out with your party and solving problems with a dagger in the back, fireball to the face or sword grasped in an armored gauntlet, you’ll also be deploying the Inquisition’s forces across the land. Your war council, which features some familiar past faces, will help to direct your efforts with force, subtlety or diplomatically. I only got to see the first few hours, but I love this larger approach to the story. From the looks of the map, Dragon Age: Inquisition will extend all the way from Ferelden to Orlais, and the characters, new and old, are really interesting. I spent plenty of my six hours just talking to my new companions once I had broken free from the tutorial sections.

Also it’s going to be really difficult not just bringing Varric along all the time, especially now that you’ll occasionally get to comment when your companions start chatting with each other, a BioWare trademark.

Having that little bit of engagement is actually pretty important, because my absolute favorite part of Dragon Age: Inquisition so far is that the game is massive. There’s just a lot to see and do, and the world feels more alive than ever – I even got to witness a dragon and a giant beating each other up. It’s refreshing to see things off in the distance and actually be able to travel to them to explore, instead of finding out it’s just part of the sky box. As I mentioned earlier, I got a prompt on screen that I had explored region six of twenty-nine, and these regions are not tiny either. One region is easily larger than many of the areas in the first two games. The fact that you can stumble into regions that your party might not be ready for yet should tell you a lot about how much freedom you’re being given in the game.

Now you still need to travel between the larger zones, but I just love that Dragon Age is a world again, not just a series of connected rooms, caves and paths. Even the more tightly mapped sections give you a lot of freedom, a path between two hills might lead to the next objective, but if you want to scale those hills and look for additional resources or just get a nice view of your surroundings your free to do so. The only thing I wish I had been able to see during my time was one of the larger cities.

As much as I personally love exploration though, Dragon Age: Inquisition is still a game where violence is solving a lot of your problems. Similar to the design aesthetic, Dragon Age: Inquisition seems to be aiming for that middle-ground between the first two games. I was previewing the game on the PS4, and hitting the touchpad in the center would switch your view from third-person to the isometric tactical view. The third-person view played out very similar to the other games, with your abilities and potions assigned to the various wheels and mostly relying the semi-programmable AI to manage the remaining members. The tactical view pauses the game and gives you a lot more information about your foes. Once you’ve set your orders you can jump back to one of the characters or advance time in the tactical view. For the most part though, I found the tactical camera unnecessary at least on the console at the early part of the game. I’m eager to get my hands on the PC version and crank the difficulty up a notch. However, even at the normal difficulty, I could still find sufficient and satisfying challenge by attacking groups a little outside my level.

The last major feature I got to spend some time with was the much more extensive crafting and resource system. Gathering resources is much of the incentive for hunting down every corner of the map, and you can use these resources to craft new weapons, armor, upgrades for your Inquisition forces and a number of other things. Your armor and weapon upgrades will even change how the item looks, and you’re once again free to equip every items of your party’s gear.

Honestly, having not paid a ton of attention to Dragon Age: Inquisition‘s development this preview has really sold me on the game. It’s everything I’m looking for in an RPG, an interesting story and characters, a large world to explore filled with little details, and solid combat to back it up. If the game manages to keep up the same quality as the initial few hours then I think BioWare has a masterful RPG with Dragon Age: Inquisition.

Be sure to check back for our review later in the month.