Published by Green Ronin. Released May 2015. Copy purchased by reviewer.

Dragon Age may be a video game franchise, but it owes a lot to tabletop roleplaying. Dungeons & Dragons was a major inspiration for the series, and it shines across Thedas despite all those Grey Wardens and Darkspawn. That’s why it was so appropriate when Green Ronin published the Dragon Age RPG box sets. Rolling dice while players led wardens and circle mages across Ferelden felt perfectly natural, and the system welcomed players of all experiences and stripes.

And now that Green Ronin has finished its rules with a final box set, there’s one step left – releasing Dragon Age as a complete core book. Whether you’re a tabletop gamer or just a curious BioWare fan let me assure you – this is a wonderful game. It covers all existing rules, spells, level upgrades, and monsters from previous sets. It lets players design a massive range of characters, from Grey Wardens to your favorite companion archetype. It even highlights some Inquisition content, including a brand-new starting adventure in Orlais. 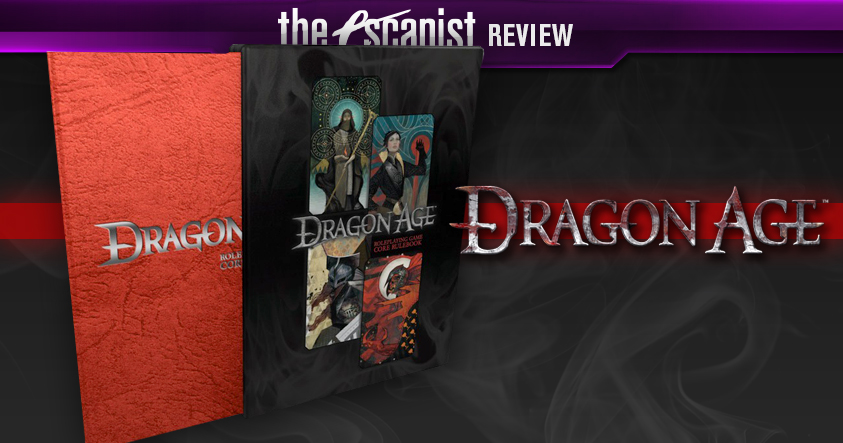 Let’s say you’re sitting down to design a Dragon Age campaign. Where do you begin? Origin‘s Ferelden? Dragon Age 2‘s Kirkwall? Inquisition‘s Orlais? How about the Dales, Orzammar, or the distant and powerful Tevinter Imperium?

How about any of the above?

The biggest appeal to the Dragon Age core book is using all of Thedas as your setting, and the core book excels on that front. Its setting chapters detail every major location, culture, and race portrayed in the series to date, while describing their impact on the history of Thedas. Not only is the information incredibly useful for coming up with adventure ideas, it’s invaluable to players seeking context for how their characters could fit into the world. Most importantly, the book includes several alternate campaign frames – including Inquisition – so players can explore adventures outside of its “Fight the Blight” default.

An especially nice touch is how setting information is divided between what characters know from the Player’s Guide, and how the world actually is from the Game Masters Guide. Starting characters know the Grey Wardens exist, but not the cost of the Joining ceremony. The Chantry teaches that Tevinter mages created the darkspawn, but the actual history is far more uncertain and complicated. Provided everyone keeps to their respective chapters players will learn all the secrets of Thedas through play – assuming they don’t already know from the video games of course. 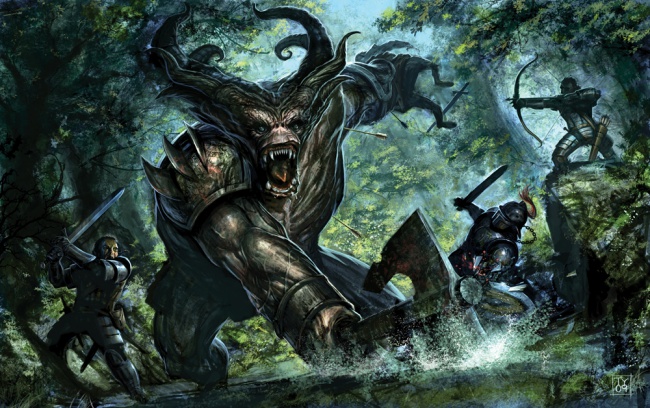 The setting also provides far more monsters than you’ll know what to do with. Everything from human enemies and ogres to the Archdemon itself are included here. If Game Masters wanted they could recreate almost any encounter from Origins or Dragon Age 2 – including some expansions – or come up with creative interpretations of their own. I don’t know if Green Ronin will ever offer a Dragon Age bestiary, but there’s more than enough here to challenge your players

The only real drawback to Dragon Age‘s setting sections is that it’s a crash-course overview. It’s easier to digest than reading every Dragon Age codex entry at once, but you’ll still only get broad strokes – there’s a map of Ferelden but not the capital of Denerim you’ll actually play in. Green Ronin does reference Dragon Age novels and guides like World of Thedas, and you could probably find free details from online wikis. But it puts the onus on the player to find that information themselves, or make it up along the way. But that’s a minor quibble considering all the content Green Ronin did fit into the book. 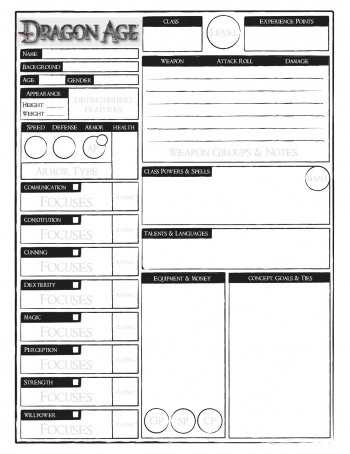 There are a huge range of characters in the Dragon Age universe – Grey Wardens, mages, templars, elves, dwarves, sea raiders, and many more – and the core book covers them all with an easy-to-follow character creation system.

Just like the video game, there are only three classes – Mages, Rogues, and Warriors – which keeps the mechanics for creation straightforward. But the real flavor of your character is determined by backgrounds and specializations. Character background is chosen before your class, determining your culture, race, upbringing, and proficient skills. Dragon Age has a staggering 30 backgrounds to choose from, including Fereldan Noble, Dalish Elf, Surface Dwarf, Circle Mage, and even Qunari Tal-Vashoth.

As you level up, specializations come into play. Specializations are unique talents that distinguish you from other players of your class while providing certain mechanical benefits. Combined with backgrounds, the simple system allows for a enormous variety of characters. Will your apostate become a Blood Mage or a Spirit Healer? Will your city elf become a Bard or a Ranger? Will you train your Orlesian noble as a Templar or a Chevalier? There are seemingly countless choices available to you, with every single one fitting into Dragon Age‘s massive setting.

In practical terms, the modular character creation means you can create a huge range of unique characters. But it’s also absolutely possible to add your favorite Grey Wardens and Inquisitors into the mix. My own players ended up converting two versions of Origins wardens, complete with campaign items like the Key to Orzammar. There’s a satisfying and deeply personal touch to running new adventures with your favorite characters – even if it breaks canon to put multiple wardens in the same party.

The downside is that if you’re creating a high-level character from scratch, the creation process will be long and tedious. It’s far easier to start small and upgrade over time than prepare a fully-designed hero for a high-level adventure. But regardless of how you get there, each character will feel unique – and unlike some systems, Dragon Age doesn’t need complicated multiclassing.

As a tabletop game, Dragon Age faces a unique challenge. Many of its fans will be long-time RPG players who want the in-depth experience of traditional fantasy games. But at the same time, many will be newcomers who only know the video games, have never experienced tabletop rules, and would be turned off by excessive number crunching. Trying to satisfy these two groups is harder than convincing Origins fans that Dragon Age 2 was just as good – but Green Ronin pulled it off with flying colors.

To start, players have only eight skills to control all actions in the game. But to represent individual experience and training, characters can also purchase focuses that attach to skills – someone could add a Stealth focus to their Dexterity roll, or Axes to their Strength, or Faith to their Willpower. Outside of the storytelling opportunities each focus implies, anytime you attempt an action that uses a focus you automatically get a boost to the roll. This keeps the skill mechanics simple for all players, while encouraging everyone to buy a diverse set of focuses to use in play.

But it’s the clever dice-rolling mechanic itself where Dragon Age‘s system really shines. Players always roll three six-sided dice, one of which is a different color from the others – your Dragon Die. Anytime you succeed at an action and roll doubles, you gain stunt points equal to the number on the Dragon Die. These points can be spent to roll for extra damage, knock an opponent prone, conduct a more effective room search, and more. They can even be applied during social encounters, such as attempting to romance an NPC – which everyone knows is a crucial part of any Dragon Age game.

In play, the Dragon die make the lowest of characters into an epic hero. The simplest combat encounter might let you knock an enemy prone, attack multiple enemies, or pull off a violent finishing move in a single dice roll. Players who aren’t used to roleplaying banter will find inspiration with stunts that provide a mechanical edge. Instead of flipping through pages for advanced rules – which breaks immersion – stunts keep players focused on the in-game action. In turn, dice rolls get a lot more exciting – and dangerous – when you realize NPCs might use stunts against you. 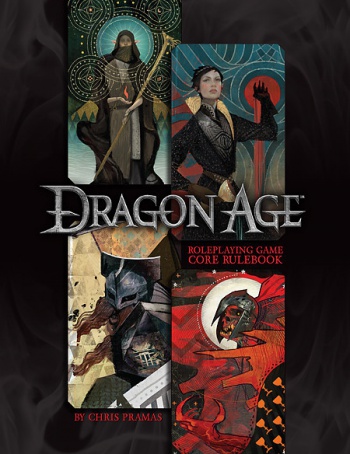 But Dragon Dice go well beyond critical successes. Who breaks the tie during a competitive dice roll? Whoever has the highest dragon die. Want to track player progress on an advanced skill check? Tally the dragon die rolls. Some magic spells even use the dragon die to track bonus damage. It’s a simple mechanic that everyone can follow, but has enough complexity to keep the game dynamic with every roll.

Dragon Age‘s mechanics become more complex as characters level up – a side effect of originally designing the game as box sets. Magic is the most significant example of this, as high-level spells increase the chances of a botched roll – potentially unleashing demons from the Fade in the process. It fits the lore perfectly, and keeps high-level play tense, although might be a little hard to follow if you’re starting as a high-level character. Other systems, like the Mass Combat rules, are a little flimsier – I once ran a battle the Heroes definitively won without inflicting a single casualty on the enemy. That said, the systems are still effective at making players part of a larger narrative beyond adventures and dungeon crawls.

The only real drawback to Dragon Age‘s core book is that it’s a massive core book. When published as box sets, first-time players could focus entirely on rules for low-level characters until they were comfortable with advanced mechanics. Now that Dragon Age is well over 400 pages, parsing the book for useful content will feel more daunting to new gamers. On the plus side, the content is very well organized, easy to digest, features a solid index, and includes lots of helpful advice – especially on the GM front.

Besides – this is Dragon Age. Fitting everything into a huge tome just feels right. Green Ronin’s take on the game is a fantastic fit for any gamer’s bookshelf, and well worth the time to roll up new characters.

Recommendation: Buy this game. You won’t be disappointed.