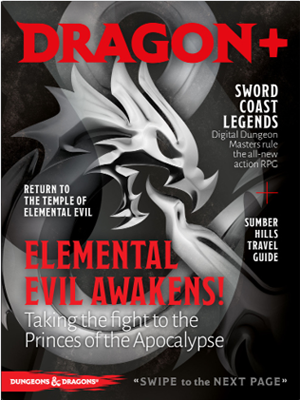 Dungeons & Dragons has an official magazine once more.

Wizards of the Coast has launched a new digital periodical, Dragon+, as a successor to Dragon Magazine. Delivered via an app available now on iOS, issues will contain articles and interviews pertaining to the current Dungeons & Dragons storyline and its related products, including comics, setting material, and videos.

The debut issue features a preview of the Elemental Evil storyline and interviews with Dan Tudge and Rob Overmeyer. Other articles include an examination of the Dessarin Valley region, a profile of the Goliath race, and tips for engaging black dragons in combat.

Dragon+ will publish six issues a year, available for free from within the app. Readers can choose to download issues individually or subscribe to have new issues downloaded as soon as they are available. An Android version of the Dragon+ is said to be arriving in the near future.

Starting in 1976, Dragon Magazine served as the first (and longest running) official magazine for enthusiasts of Dungeons & Dragons. The magazine ceased its print publication and transitioned to a digital format in 2007. It continued to publish issues monthly until late 2013, when it was announced that Dragon (and its companion publication, Dungeon) would be placed on hiatus.

Incredible Game of Thrones Art Worthy of the Iron Throne

Kirby and the Forgotten Land Revealed, Has Open Sandbox Gameplay