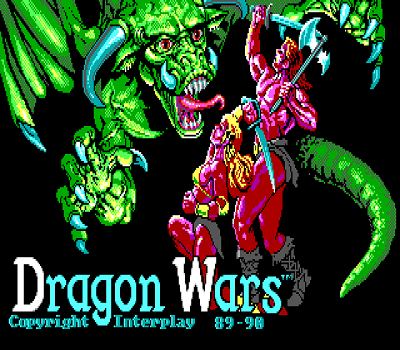 One thing that I’m really interested in (especially after writing up the history of a whole bunch of them) is old school CRPGs. A lot of my curiosity comes from the fact that I haven’t really played many of them. Setting aside the fact that I was born at the tail end of the genre’s golden age, I just never had much interest in them when I was younger. After all, why would I waste when my PC time playing RPGs when I already had Final Fantasy on consoles? (Remind me to kick my 15 year old self.)

It makes me sad because, the more I learn about them, the more fascinating I find them and the era that produced them. It was a pioneering time where developers were striving not just to make products, but to adapt complex worlds and rules into gaming experiences unlike anything ever made before. The ambition of that period alone is something that I find to be inspiring.

The problem with these games, especially when you only have a few weeks to play and review them, is that they tend to be exceptionally long. Reviewing Ultima IV, for instance, took me months. I started playing the game a bit everyday back in September 2013 (when Good Old Reviews started running) and didn’t feel comfortable writing about it until December of that same year. Touching on games that expansive on a regular basis is something that would be really difficult. That being said, I’ve had a hankering to jump back into one for awhile now and GOG’s re-release of Dragon Wars seemed like a decent opportunity to do so.
Truth be told, I’d never even heard of Dragon Wars before seeing its release announcement. I have a huge soft spot for pulpy fantasy artwork however and seeing its box art immediately made me want to give it a try. As most gamers probably know, however, box art does not a great game make. I had no idea if the experience I was getting into was one that’d be worthwhile.

Luckily, Dragon Wars wound up being a fun and, in places, impressive RPG. Dropping the player into the world of Dilmun where magic has been outlawed, it begins with the player party being placed under arrest under suspicions of spell casting. Thrown into the prison slum of Purgatory, the player has to find a way to escape, bring peace to the land, and defeat the evil wizard Namtar. The story itself is pretty basic as far as fantasy titles go. You’re the good guys and there’s a baddie. Go forth and smite. That said, it’s well-written and the text does a great job of illustrating the game’s world where technical limitations prevented the graphics from doing so.

I suppose that some might be a bit turned off by the fact that most of said text actually isn’t in the game, but I rather enjoyed reading the story paragraphs contained in the game’s manual. I got excited every time the words “Read Paragraph (Insert Number)” would appear on screen and, honestly, it was kind of nice to have the text be separate from the game. I sometimes have a tendency to skim and click through text when it appears on the screen. Having to read it in an actual document (though I would prefer a physical book to a PDF), ultimately made it easier for me to break out of my bad gamer habits and give the text the attention it deserved.

The gameplay is similarly good, if perhaps a bit more weighed down in parts by its archaic bits. Made by the same designers who worked on The Bard’s Tale series, Dragon Wars should feel familiar to anyone who spent any amount of time with the great old school dungeon crawlers. You’re given a party of warriors whom you control from a first person perspective. You direct them around maps containing random enemy and fixed story encounters which you must resolve in combat or with your party’s skills. Battles are turn-based and controlled via the keyboard, though there are some fairly redundant mouse control options available.

What perhaps sets Dragon Wars apart from other RPGs of this era is just how much effort has gone into giving you choices as to how you proceed and complete the game. Take the opening section where you have to get out of Purgatory. Rather than forcing you into one set method of escape, the game gives you five completely different paths out of the slum that range from selling yourself into slavery to disguising your party as dead bodies to get tossed into the sea. The game, overall, does a great job of giving you moments where there’s more than one solution to your problems.

This openness bleeds over into the character progression where you’re given a lot of leeway concerning how your party develops. There aren’t any formal classes in Dragon Wars. Every character is free to learn whatever skills and proficiencies you desire, with many being completely unrelated to combat. Better yet, those non-combat skills are actually integrated into the game in ways that make them feel worthwhile. It is intensely satisfying, for instance, to stumble across an injured soldier and realize that you’re equipped to help him because you had your front-line fighter invest a point in Bandage at the game’s outset. There are a few skills that wind up feeling kind of useless, but most are implemented well.

Unfortunately, the game’s openness can, at times, also bite you in the butt, especially when it comes to where it lets you go and when. After you escape from Purgatory, you’re free to roam and explore the game world as you please. As nice as that is, it also makes it possible to go to places you’re not prepared for and even get stuck in them. Add in the fact that you only have one save slot to record your progress and you have a recipe for some intensely frustrating disasters. I had to restart my game at one point because I somehow managed to get stuck between a pair of goblin war bands that spawned at fixed points. I tried backtracking, I tried looking for different routes; none of it did me any good. I couldn’t find my way out and every time I tried to fight through the goblins, they’d kill me handily.
“But Stew,” you say. “Why not just level up until you’re strong enough to take them on?” I thought of that too, but found myself halted by some of Dragon Wars other problems. While I liked overall how the game handled leveling, I was disappointed with how small the rewards were for doing so. Every time you ascend a level, regardless of how far you are into the game, you’re given a mere two skill points to improve your stats. On the one hand, I do like that it restricts you enough to keep the combat challenging. You never feel like you’re a party of demigods who can slaughter their foes with a look. The thing is, two skill points often just isn’t enough to make meaningful progress and the combat can sometimes be a bit too brutal as a result.

Level grinding can also be an outright hazard thanks to the sparse nature of items and magic in the game, especially during its opening hours. Even after you gain access to magic, its use is limited by a finite supply of mana that can only be recharged by special items or at spots in the game world. Items, likewise, can be hard to come by thanks to the fact that only human enemies drop money and, even then, in small amounts. It’s very easy, in turn, to find yourself in the middle of a tough area with your party injured, but lacking any means of getting back the magic points you need to cast healing spells.

To be fair, the game does balance this out in some ways. In addition to their health, each character in the player party also has a “stun” bar that serves as a second layer of recharging HP. If it’s drained, they’ll be knocked unconscious, taking them out of the fight without permanently killing them. The stun mechanic won’t stop your characters from dying, however, and Odin help you if that happens because there’s no greater hassle in Dragon Wars than having to revive a fallen companion. There are only a few places in the game world where you can do it and, most of the time, you’ll be better off just reloading your game than going through the ordeal of soliciting a resurrection.

There are other small issues, too. The process of casting spells (“press C, select character, choose spell type, choose spell, repeat) can be cumbersome. The automap feature, while welcome, can also be limited in its usefulness thanks to the fact that it doesn’t mark special locations or give you options to make manual notes. Even with these inconveniences however, the greater whole of Dragon Wars is still well worth playing. This isn’t just a game with cool box art. It’s an RPG that you should play.

Inspired by Dragon Wars epic box art, I’m going to spend next week detailing my favorite pieces of box art from gaming’s past.