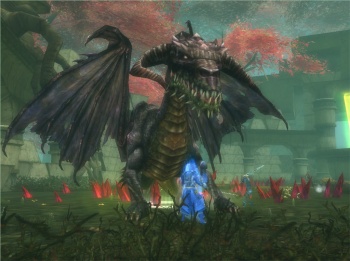 It’s probably safe to say that MMORPGs were one of the most important gaming topics of all 2009. Not sure an accurate count can be found, but it seemed as if a new IP was announced each week. Even the older ones, like Ultima Online and Everquest, were working hard to keep their worlds fresh and interesting, to both veteran and new players.

Perhaps the biggest headline amongst all the MMORPG chatter was the news of Dungeons & Dragons Online rolling the dice and switching their format to the free-to-play (F2P) version. From the looks of things, they seem to have made a very successful saving throw in this encounter, and are starting off this year by continuing to increase their share of the MMORPG player market with their third update to DDO, scheduled for a 3 February release.

Update 3 doesn’t have a fancy name, much like Update 1 and Update 2 before it. However, after accepting a gracious offer from Turbine to log in for an early look at the new upcoming content, I can report that it does have plenty of the same solid gameplay that DDO has now, along with some very cool new surprises.

Update 3 is DDO‘s first free content expansion, a remarkable feat when you consider all that comes with it. Four completely new high level quests headline the content: Mired in Kobolds (CR13), Delirium (CR15), Acid Wit (CR15), and In the Demon’s Den (CR18). Thankfully, the Turbine team provided escort through Mired in Kobolds and Delirium, allowing this reporter to return with hints of what to expect.

Mired in Kobolds is very aptly named, as these walking dogs seem to be waiting on players from every corner and crevice in this quest. Along with the new content, Turbine has instituted many new gameplay elements, particularly some new environmental objects that can either be a help or a hindrance for adventurers, depending on how players choose to use them. Here, for example, our party came upon large red floating crystals that the kobolds seemed to be using to their magical advantage. Luckily for us, they also happened to be quite damaging when struck to the point of exploding. Players should also be careful where they walk, as not all the flora in this quest is safe to tread through.

Delirium takes place in an inn near the Tower of the Twelve. Think more along the lines of The Eagles’ song Hotel California, and you’ll have some small idea of how this one plays out. Xoriat, the Plane of Madness, is bleeding through here, and it’s your task to figure out how and why. There is plenty of combat to be had, against some rather unusual enemies, but it’s the puzzles and the sudden ‘Silent Hill-like’ change that the inn undergoes that makes this a very fun run. Oh, and you’ll also encounter beholders, but in a way that you never have before in DDO. Bottoms up!

Update 3 also does away with the need for leveling sigils, so now every DDO: Eberron Unlimited player may advance without pause all the way to the level 20 cap. This is part of the attention Turbine is giving to their non-subscription player base, and shows their commitment to creating valuable gameplay for all their players.

Another gameplay element for helping players in DDO is the change in instance mode from Solo to Casual. Choosing to run an instance on Casual mode will allow you to do so either solo, or with a party. Casual mode will also let solo players bring their hirelings, something that couldn’t be done in the former Solo mode. The difficulty selection screen that pops up before entering each instance will also tell you the difficulty level of the instance, which players may use to better prepare themselves or their party beforehand. Casual mode has also been extended to cover all quests to level 20, except raids and solo-only quests, allowing high-level characters access to many more instances.

Just in time for the 2010 Winter Olympic Games, Update 3 will be bringing in a new treat for players – the Risia Ice Games. The Harbor and House Phiarlan tavern will be host to ice skating and ski jump events, with ice coins being awarded that may go towards crafting ice-styled rewards. Also, be on the lookout for the Festival of the Traveler, arriving near the end of February, that will herald Stormreach‘s birthday with a special scavenger hunt.

Update 3 will also bring with it a lot of cosmetic changes, one being the addition of a nighttime effect. The public city areas will all have a shared nighttime mode, helping players with their immersion into a living, breathing Eberron. Players wishing to take on the challenge of an Epic-level raid against the Red Dragon Velah may also receive the all new Red Dragon Scale armor, which comes in metal and cloth forms. A lot of new background work also went into improving the overall graphics, which should make the world of DDO look and play all the better.

February 3 is only a couple days away, so DDO players be sure not to miss the free Update 3. If by chance you’re not yet playing DDO, now is a good time to check it out. It’s essentially a free MMORPG, but with a quality both in and behind the game that set it apart from all others. This year is looking to be another great adventure for DDO, so join the party and get your fair share of the loot!