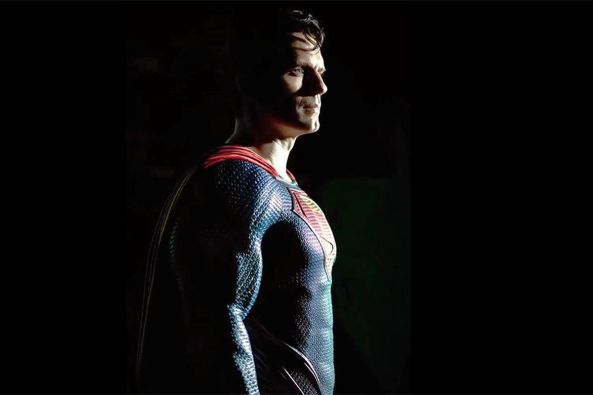 If you haven’t seen or heard about the teaser at the end of Black Adam… well, the headline pretty much ruined it for you. In it, Henry Cavill makes his triumphant return as Superman, flying in to tell Black Adam that he’s keeping an eye on him and it could mean trouble. By now it’s been extensively documented that Cavill’s return to the DC Films universe was brought about by Dwayne Johnson himself fighting for it. However, just how hard he had to fight wasn’t known until today when Johnson put out a tweet revealing that Warner Bros. didn’t want Henry Cavill to return at all and that Johnson basically had to swing around his giant Hollywood clout to get Superman back.

Sayin’ thank ya so much from my ol’ pick up truck for all the amazing #BlackAdam support and reactions
#1 movie on iTunes 🔥
We’ll remain in theaters as well throughout the holidays 🎅🏾⚡️
Also wanted to give ya some #Superman info 👊🏾
Happy 🦃🍿 pic.twitter.com/WyGa49J7Dr

Johnson claims that DC fought him on the decision to bring Superman, and specifically Cavill, back for Black Adam, but the actor / producer / large human wouldn’t “take no for an answer.” He believed that, to actually show that Black Adam is this massively powerful person, you had to have the most powerful person in the DC universe show up. He said that the higher-ups and DC “inexplicably and inexcusably” refused to allow it. It took him and his studio Seven Bucks Productions years to convince DC to let him do it, working through strategic conversations and the tumultuous changes in who was in charge of the DC Films and Warner Bros. parent company, Warner Discovery. However, they got it done and Cavill is officially back as Superman thanks to the Rock.

“It all comes back to — ‘Where is Superman?'” said Johnson. “You have to have Superman in the mix. So that’s why we fought hard to bring Superman back — Henry Cavill — and there was no other Superman, by the way, to bring back. Henry Cavill is our generation’s Superman and, in my opinion, the greatest Superman. And I mean that respectfully to the other actors, especially Christopher Reeve, but the greatest Superman of all time.”

Obviously, Black Adam has been a success for DC, and Cavill’s return has engendered near-universal goodwill. However, calling WB’s desire to move on from Cavill inexplicable and inexcusable is kind of ridiculous. To begin with, all three of Cavill’s outings as the Man of Steel had been met with, at best, tepid responses. The studio was in the middle of blowing up the entire Snyderverse, and Cavill was the walking embodiment of that universe, having kicked it all off with Man of Steel and playing DC’s biggest hero. Unlike Wonder Woman and Aquaman, Cavill’s Superman didn’t have a successful film to his name in years, and replacing him, especially as a multiverse kicks off, would have been incredibly tempting and easy for any executive. While Cavill may still prove to be a fantastic Superman, his returning was not as logical a move as Johnson seems to think.