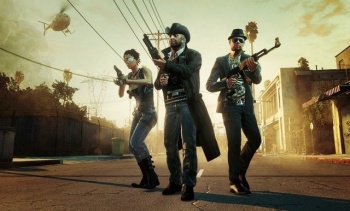 Do some dirty work behind your friends’ backs.

The game brings the series into a modern day setting, after a Mexican drug cartel has bombed a DEA building. Knowing that any kind of military response would result in all-out war, the US instead decides to send a team of three operatives into Mexico to take out the cartel’s leader, Juan Mendoza. The trio consists of Ben McCall, LAPD officer and descendent of the McCalls featured in earlier Juarez games; DEA agent Eddie Guerra; and Kim Evans of the FBI. Playing solo with AI companions or online with two pals, you must work together as a team to work through more than a dozen missions to take down Mendoza. Each character has their own backstory and personal perspective on the situation, and playing through with each one will offer up a different experience.

Missions play out pretty much the way you’d expect: Blow into town, shoot everyone who looks at you sideways, get a lead on a new destination, move on. There are plenty of guns to satisfy your inner marksman, and you can change your loadout between missions.

So far, that’s pretty standard fare for a game like this, but where it begins to get interesting is with the dirty little secrets that the three law enforcement agents are hiding. Eddie, for example, has a fairly serious gambling problem, while Kim lost her brothers to gang violence. Each character’s obvious objective is to get Mendoza, but they’re also working personal agendas at the same time. During missions, depending on which character you select, you’ll receive different challenges and objectives – perhaps meeting an informant on the sly, or picking up a package. Eddie is doing jobs for the people he owes money, for example. The trick is, you have to perform these tasks without being spotted by your partners. If they see you completing a personal challenge they receive the experience points you would have otherwise earned.

The temptation would naturally be to just break off from your squad mates as soon as you entered a new environment, but The Cartel savvily peppers each mission with several sections that must be completed as a team. You might have to provide suppressing fire for your companion as they storm into a room, or all hop into a truck and chase down a fleeing felon. The push/pull dynamic of having to rely on each other while simultaneously needing to further your own goals could make for some interesting gameplay.

Each character has their own sent of proficiencies, such as being particularly good with a type of weapon, so the experience you earn from finding secret items and completing challenges goes towards granting you access to newer, better weapons. You might have the cash you need to snag that sweet new pistol, but it’ll be off limits until you’re a high enough level to handle it.

Call of Juarez: The Cartel looks like it might mix up the shooter formula just enough to make it stand out when it’s released for 360, PS3, and PC later this summer.