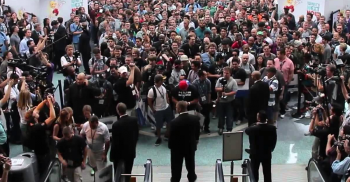 Since opening its doors for the first time twenty years ago, the Electronic Entertainment Expo has been closed to the public, allowing only members of the industry and press to sample the digital delights on its floor. According to a report from Polygon, that will change this year, as the show’s organizing body, the Electronic Software Association, will be allocating between 4,000-5,000 passes to be given to members of the public.

The passes, which provide access during all three days of the event, will be supplied to ESA member exhibitors in attendance, who may then offer them to valued customers or, as the ESA is calling them, “prosumers.” The number of passes exhibitors receive will be based upon the size of their presence at the show (and, by extension, how much money they’ve given the ESA to be there; roughly half of the trade group’s annual budget comes from the show).

According to Rich Taylor, senior vice president of consumer and industry affairs for the ESA, the decision to offer passes to the public was brought on by several factors. Some exhibitors had expressed a desire to connect more directly with customers, and there is some hope that their presence may generate additional buzz through social media channels.

E3 now represents something of an anomaly in terms of allowing public attendance. The two most comparable international events, Tokyo Game Show and gamescom, both have days in their schedule open to the public. The event also now faces competition from consumer-focused conventions and the expansion of the games industry into the mainstream has made broader entertainment events like San Diego Comic-Con appealing to publishers.

The move will bring an estimated additional 10% attendance to E3, which has experienced some small, controlled growth following the show’s return to the Los Angeles Convention Center in 2009.