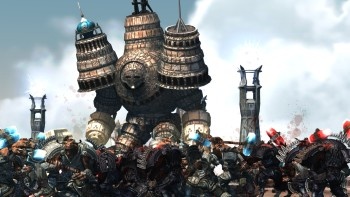 At DICE 2010, Gas Powered Games CEO Chris Taylor and Epic Games president Dr. Mike Capps agreed on at least one thing: These days, it’s harder to be an independent developer than ever before.

Much like the terms “casual gamer” and “hardcore gamer,” the phrase “independent developer” is a hard one to qualify. What do you think of when you read those words? Is one guy making a Flash game in his basement on his off hours simply as a labor of love? Is it a polished, for-profit game made by a small twosome like World of Goo? Or is it a large company that produces high-quality blockbuster hits, but doesn’t have a parent company to fund its games?

Being independent has its benefits, but no matter the size of your company, it’s also pretty trying – at least, that was the message from Epic’s Dr. Mike Capps and Gas Powered’s Chris Taylor on the stage at DICE 2010, reports Gamasutra. “We’ve been independent for 12 years this May,” said Taylor, whose company was behind last year’s DotA clone, Demigod. “There’s a real fine line. I guess it’s a big line between indie development on the iPhone and [what we do]. Mike’s doing bigtime independent stuff, and we’re doing medium independent stuff.”

As for Epic, one would think that the maker of the Unreal Engine and developer of Gears of War and the acclaimed Shadow Complex would be sailing smooth, right? Maybe not so much. “It’s getting harder and harder to be independent, especially at our size,” Capps admitted. “Knowing what you know well is important. It’s all about picking a battle. For us it’s about tech and making a good game, and knowing what we don’t do well.”

For Epic, the deal the Cary, North Carolina-based developer had made to have Microsoft publish Gears of War had been crucial, said Capps. “[S]omebody’s got to put up a billboard in Hong Kong, and it’s not going to be me.” However, Taylor cautioned against falling into the publisher model too easily: “[E]ven though we were independent, we were so dependent on these publishers that we were basically outsourcing studios. That’s not being independent,” he said. “It’s been really unfortunate for a lot of independent developers who are basically beholden to the traditional publisher model.”

“Once you get on that cycle it’s hard to get off,” agreed Capps. “It’s like, ‘Oh, your independent IP is great, but why don’t you do this license for us at the same time?'” The Epic president admitted that running a company like Epic was filled with difficult financial decisions. “You can make a game like [Chair Entertainment’s] Shadow Complex, be a 10- to 12-man team for a year, get to be a best-selling game on [Xbox Live Arcade], and then still have money be tight.”

Either way, it came down to a tradeoff between freedom as a developer and financial stability: “Talking about freedom, you take on a lot of risk, so my children will probably not go to college because of Demigod,” Taylor said, half-jokingly.

A half-joke is half serious, after all: Is not being beholden to a publisher or a parent company worth the uncertainty of whether or not you’ll be able to provide for your family?