When camera-maestro Justin Clouse and I were invited to cover a friendly paintball war between Gears of War developers Epic Games and Tom Clancy’s Rainbow Six makers Red Storm Entertainment, there were two thoughts on my mind (three thoughts if you count “wheeeee, paintball!” as one of them): “Does a developer’s experience making shooter games carry over into real life?” and “Boy, I picked the wrong day to wear my field reporter coat.”

Sweltering North Carolinian temperature aside, I figured the first question was legitimate enough. That’s not to say that the skills involved in making (and playing) a game will necessarily apply to the real world, but still couldn’t help but wonder. After all, these people spend literally years of their lives developing the games – might they internalize a bit of their world’s warfare?

Epic makes Unreal Tournament and Gears of War, two sci-fi shooters that aren’t so much “realistic” as they are “fun.” On the other end of the spectrum were the Ghost Recon and Rainbow Six games from Red Storm – more down-to-earth, tactical games inspired by real-life military action. Would the realistic military tactics of Red Storm give them an advantage over the cover-based, actively-reloading Epic forces? Would people be disqualified for curbstomping their opponents? (Probably.)

The first match of the day was an Epic-only affair – Red Storm was still waiting in line to get the passes – on the Fort map (that’s just one Fort, not 2Fort). It was a largely open field dominated by the eponymous fort in the center, dotted with cover like upended cars, little shacks and overgrown ditches. This brief skirmish was over quickly, and but the stage was soon set for another game, this time between Epic and Red Storm proper. 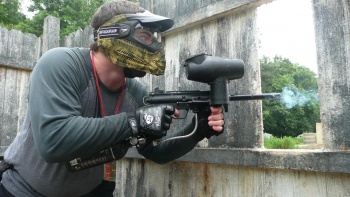 As before, it was on the Fort field – only this time, it would be a game of capture the flag with a single flag in the middle which was to be retrieved and brought back to your team’s “respawn” point. The first game went to Red Storm, and following a switch of sides, the second game went to Epic after a daring flag grab under fire. The tie-breaking third, however, once more went to Red Storm – in part due to a suicidal flag rush after one of their members realized that the respawns meant you could just dash for the flag, and in part due to the fact that whoever captured the Fort first had a huge advantage. Map imbalance indeed.

The next game was set on Assault, which was a very close-range map made of two identical forts facing each other at a short distance. In contrast to the previous match, this was a straight-out deathmatch – last team standing won. After some very fast-paced, close-range fighting (during which I made excellent use of the riot shield loaned to me by Epic), the match was once again decided in favor of Red Storm.

Could there be some merit to this tactical shooter thing, after all?

We wouldn’t find out in the next match, however, because the teams were split in your standard “captains pick” style you may remember from elementary school. This new game was on the heavily-forested Lake map, so named for the large lake in the center of the field that forced attackers to either take the long way around or risk crossing a narrow and potentially dangerous bridge. Though it was slightly smaller than the neighboring Fort, it felt much bigger thanks to the abundance of natural cover (also known as trees).

The fighting was thick and fierce, and it seemed that both sides were a bit too eager to shoot at a moving target that happened to be a certain embedded reporter ducking for cover. This was also the only match in which it was over a good two or three minutes before the shooting stopped, because two groups on the same (winning) team had the other pinned down by friendly fire. Good communication seems to be the key to victory – who knew?

For the final match of the day, we returned to Fort to play a round of assault/defense. One team (Epic) had the fort, the other team (Red Storm) had to take it or kill all of the defenders (which pretty much would equal taking it). The fighting was slow, in short bursts as the attackers raced from cover to cover, trying to flesh out and take potshots at the well-entrenched but outnumbered defense force. 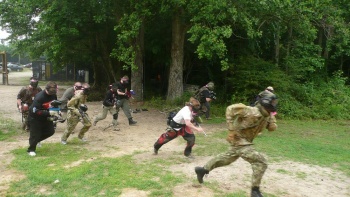 Is 'full assault' an option in Ghost Recon?

Ultimately, the Red Storm attackers wore the Epic defenders down. One or two well-concealed defenders held off the invaders by themselves for a while after the bulk of the fighting was over, but ultimately they too fell – and the day was Red Storm’s. It had been a hot day filled with paint wounds and bug bites, but it had been a good day to get painted nonetheless.

So, with Red Storm’s win streak, does this prove that time spent making tactical shooters – and presumably a familiarity with what you should be doing in a squad-based combat environment – is key to victory in paintball? Well, no, not really. See, there was another advantage on the Red Storm side: They had one guy who really, really liked paintball and had armed his coworkers with some powerful private weaponry – whereas most of the Epic side had been using field-rented guns themselves.

If anything, it proves that while tactical knowledge can help (and Epic really should have been using more active reloading) the hardware can make more of a difference.

Clearly, the Epic guys just need to show up with a bunch of paintball Lancers next time around.