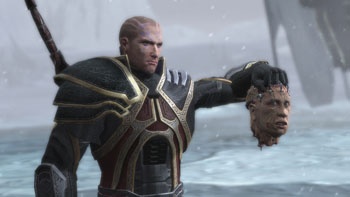 Though the final resolution of the case is still in dispute, a December 22 ruling by Chief District Judge James Dever III reveal Silicon Knights has suffered a major setback in its suit against Epic Games. The Escapist has obtained a order by the court granting Epic’s motion to exclude the reports and testimony of Terry Lloyd. Lloyd, a Certified Public Accountant and Chartered Financial Analyst, was retained by Silicon Knights “to render an opinion regarding Silicon Knights’ alleged damages.”

According to the court papers, Lloyd identified over $58 million in damages across six key categories:

The court documents summarize Lloyd’s questionable methodology for determining these damages and Epic’s arguments that Lloyd’s testimony be rejected because he is “not qualified,” his methodologies “do not fit the facts of the case,” and are “unreliable and speculative.” When Silicon Knights countered that Lloyd’s methodology was reliable, Epic replied that they seemed to be “uninformed guesses” and, just to make sure no one missed it, “made up.”

The judge agreed with Epic that Lloyd’s methodology for determining the potential sales of Too Human were based on “his own subjective conclusions about an industry in which he had no prior knowledge or experience.” The smoking gun seems to be that Lloyd did not use the same criteria to determine Too Human‘s potential sales as he did to selecting the titles he used as a yardstick. In plainer terms, Lloyd claimed marketing and genre are key factors in a game’s sales, but, when choosing other titles to measure Too Human‘s potential sales against, did not choose titles that had a similar marketing budget or genre. There are several other mistakes of this sort noted in the documents, including the forced inclusion of blockbusters like Grand Theft Auto IV despite it not meeting any of Lloyd’s selection criteria, and the inclusion of Gears of War on the basis of its “large advertising budget” despite Lloyd not knowing exactly what that budget was.

As to the economic harm to Silicon Knights’ reputation in the industry, the papers reveal Silicon Knights was in talks with Vivendi, Capcom, THQ and Namco and was negotiating development plans for King’s Quest and Sandmim. Lloyd’s methodology for determining the potential value of these projects was similarly unconvincing to the court. Lloyd’s estimation of the costs of developing a new game engine were deemed irrelevant because Microsoft and Sega reimbursed the developer for all such costs, which gives Silicon Knights no ground to seek damages under North Carolina law.

We’re still not quite to the end of this years-long legal battle, but Epic scored a major advantage with this recent ruling. We’ll be sure to keep an eye on further details as they come in.