Who among us hasn’t stolen a few coins from the house of a struggling shopkeeper? Or driven over the odd pedestrian or two as we recklessly sped to deliver drugs to a crime boss? Or ripped the living essence out of a little girl just because we wanted to shoot even more bees out of our hands? This is what we do in games and, for all the moral context developers try to shove into the experience, our first impulse isn’t to feel bad, but to wonder, “What’s in it for me?” And since most games allow for unlimited retries, if we don’t like the consequences for one action, we can always go back and try again. 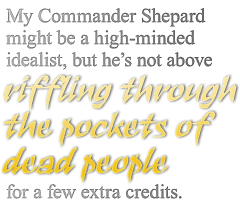 Game strategies are largely driven by utility. In evaluating two competing paths, most gamers I know tend to view them based on cost vs. rewards. There are even entire sites dedicated to just this type of calculation. Even in World of Warcraft, which is as rich in context and lore as almost any game out there, the community’s vocabulary displays a statistical bias that places function above emotional content. All the talk about Damage Per Second, Heal over Time, or 3-Minute Mages proves that the mathematical foundation of the game, which is supposed to serve the larger experience, has for many players actually become the experience.

Since most videogame characters are just a walking collection of numerical variables, it’s easy for most players to overlook the emotional content of a decision and focus instead on the gameplay rewards. With that sort of perspective, you’re not playing the character anymore; you’re just playing his or her stats, and morality just becomes one more mechanic to exploit for maximum gain. My Commander Shepard might be a high-minded idealist, but he’s not above riffling through the pockets of dead people for a few extra credits. After all, I’m trying to save the world here and, let’s face it, it owes me.

In fact, seeking out those gameplay rewards is what gives me access to even greater gameplay rewards down the line. Given that system, it’s tempting for players to abandon any sense of their character’s ethics (which should kind of be the whole point of roleplaying) and instead make moral decisions based on what powers they want to have or what type of gameplay they like. Deus Ex‘s stealth options were a better reflection of the values I wanted to express through J.C. Denton, but the shooting options were more in line with what I wanted to play. The tension between the two impulses was interesting, but combat won out over character most of the time.

What’s more interesting, and not often seen, is when the rewards for one type of gameplay are in direct competition with the rewards for another. It’s more fun, for instance, for me to be a crook in a game like Morrowind than in Grand Theft Auto because Morrowind actively works against that impulse and requires a sacrifice from the player. Yes, crime has consequences in Grand Theft Auto, but there’s little moral structure to rebel against and being bad without the option of being good isn’t particularly compelling.

There are two fundamental perspectives of morality. The first and more basic perspective relies on Shame. In a shame-based system, the society’s perception of a person’s actions is more important than the person’s own reality. The more advanced perspective relies on Guilt. In a guilt-based system, what the individual feels about their own intentions is more important than society’s opinions. The disconnect for most games with a moral element is that the game invariably views morality in terms of shame, while the player views it in terms of guilt. The developer focuses too much on the former, and too little on the latter. 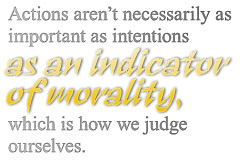 I admit I’ve shot the occasional Soiled Dove in Red Dead Redemption while trying to save her from a knife attack, but the authorities don’t seem to care about those extenuating circumstances. The shame-based morality system within the game penalizes me regardless, even though my own guilt-based perspective outside of the game justifies it as an accident. The morality system in the game, which is so rigid that it immediately tells everyone everywhere whether or not the person I just gunned down in the street deserved it, also enforces a bit of guilt-based judgment by removing my honor whenever I tie up a prospector and toss him off a cliff, even if no one is around to see it. Still, it’s a fundamentally shame-based system. You may feel like a complete psychopath for wandering around the countryside viciously murdering every criminal you find, but the rest of the world not only sees you as a hero, but is glad to pay you money for the blood-stained jerkins you keep bringing back to town.

In today’s games, what you do is more important than why you do it. In a way, that’s not very different than how our own world works. After all, as individual human beings with no special insight into the hearts or minds of others, actions are about all we can judge of another person. But actions aren’t necessarily as important as intentions as an indicator of morality, which is how we judge ourselves. After all, someone who accidentally sets your house on fire may not be immoral, but someone who tries to set your house on fire surely is, even if he or she fails. Since actions are merely the outer result of moral decisions, maybe it’s possible that moral decisions can’t yet exist within the world of games, at least not as part of any designed system.

Perhaps that’s why the industry’s early attempts to make morality matter have been so binary. Peter Molyneux’s Black & White sums up the whole experience right in the title. That’s basically the entire question of most of these games and it leaves little room for the ambiguous grey areas that might otherwise make moral considerations more compelling. Are you going to stroke your pet or beat it? Are you going to feed the orphans or feed upon them? You might as well just give us one button that says “good” and another that says “evil.”

The choices are so obvious and the consequences are so immediate, that it becomes impossible not to consciously exploit the system. Some gamers might find it unfair, but in a way, having the results of your decisions come back to haunt you much later in a game would force players to live with the consequences of their decisions rather than simply reload the game to try another approach. I turned the Mage Tower over to the Templars in the first Dragon Age but I didn’t realize just what I’d done until it became too late to go back and change it. It was frustrating to live with that sort of regret but that frustration became an important and satisfying part of my character through the rest of the game.

Having the chance to go back and change your decisions in games makes the consequences of your actions even less significant. The Little Sisters from BioShock are a great example. Not knowing what the difference would be, I decided to go ahead and harvest the first little moppet I captured. The whole experience was so unsettling, what with the flailing and crying and apparently turning into a fish, that I felt I’d made the wrong decision, morally speaking. But while sacrificing one at the start and living with that memory would be a stronger character moment, I knew it would also screw me out of whatever reward was waiting for players who saved all the Little Sisters. By reloading the game, I was able to avoid having to live with the consequence of what I’d done.

While it’s a great bit of acting and atmosphere, choosing whether to harvest them or not wound up being pretty meaningless anyway. You’re offered a substantial practical reward at the start and have to balance that against whether or not you can live with yourself for taking advantage of these creepy little kids. But by the time you reach the end of the game, the rewards for harvesting them are just about equal with the rewards for not harvesting them. So I played through the whole game adhering to a choice that had no real consequence beyond funneling me to either a “happy” or “unhappy” ending that had the added disappointment of effectively quashing the moral ambiguity that had made the setting so captivating to begin with.

The reset mentality is part of the problem. Many gamers are driven more by utility than context, so if there are multiple endings, they’re going to do what they can to see all of them, regardless of whether or not that breaks the context of the story. Without a sense of lasting consequence or finality, a story element is still optional. Just look at the difference between the transparent resolution of Knights of the Old Republic and the more layered resolution of Heavy Rain. In Knights, players have to choose between one of two roles. In one, you embrace the Dark Side, supplanting Malak to become the new Sith Lord. Using your power, you destroy the Republic fleet, and move against the Core Worlds, wiping out the last remnants of the Jedi Order along the way. If you choose to go on the redemptive Light Side, you still kill Malak, but only after teaching him some respect for the Light Side. The Republic Fleet, with your help, is able to destroy the Sith and restore order in the galaxy. The difference here lies in whether or not the player has opted for the clear choice of a “good” or “bad” ending. 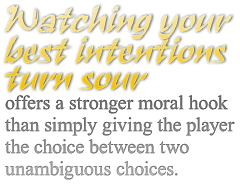 Heavy Rain‘s resolutions are much more guarded. Whether or not you get a “good” or “bad” ending in that game involves not just the outcome of the various choices you’ve made, but also on your own definition of what “good” and “bad” mean. You can still save Shaun, but you might also find that some of the major characters go insane or even kill themselves based on the experiences you’ve led them through. As in the real world, you can’t always anticipate the consequences of your actions in Heavy Rain, and watching your best intentions turn sour offers a stronger moral hook than simply giving the player the choice between the two unambiguous choices we’re offered in most morality games.

The compelling challenge to make decisions with too little information and accept the consequences is universal. How game designers choose to deepen these moral messages matters, not just because it means better games, but because it’s the one thing that best communicates the artistic potential of games to non-gamers. If designers can create intriguing narratives that give players the freedom to explore these moral issues, that has the potential to do far more than gameplay or graphics to elevate the entire medium. These are the challenges we should be facing in the future, not checking a FAQ to decide whether or not to drown a village so we can get a magic sword that does 2 more damage than the one we already have.

For all his optimism, Steve Butts is still likely to kill a man for a pair of really nice boots.

The State of Gaming Nature