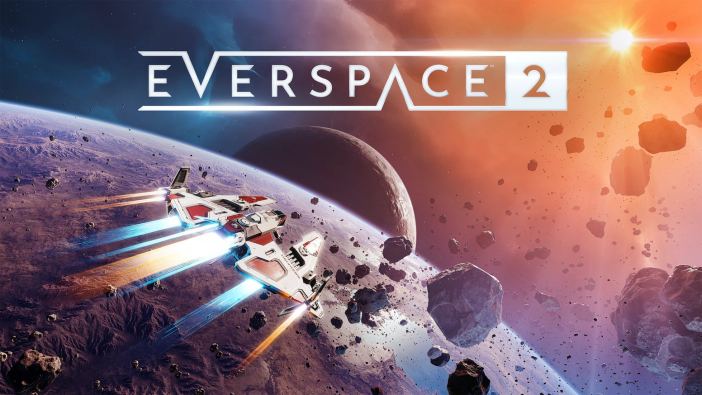 While the concept of venturing into space as a bounty hunter has a near universal appeal, many games that tackle the concept are decidedly unwelcoming to new players. Some have a simulation so detailed that one needs a wiki open at all times to figure out what is going on, and others delight in throwing the player into the deep end, often only moments away from being sniped by a more experienced player. Rockfish Games‘ Everspace 2 takes a different approach in early access, parceling out information bit by bit and increasing the difficulty at a steady pace. The game just launched in early access, but the content available is highly polished and promising, having the player fight, loot, and puzzle their way through the galaxy.

Adam had things all figured out. As a clone that legally should not exist, he decided to hide himself amongst a mining crew, trading dull work for anonymity. His plan worked well for a while, long enough to settle in and make friends, but a sudden attack on an insignificant mining site had lasting consequences. Most of his coworkers were killed, with only Adam spared for possible trading value with the authorities.

Awakening in a filthy jail cell, Adam learns his friend Ben also survived the attack, but only just, and will die soon without medical attention. Another inmate, Dax, offers a trade: medical treatment in exchange for helping him bust out of prison. Adam agrees readily, and the pair become fast friends as they fight their way through outlaw hordes. Finally free, the heroes settle in at an old rebel base, putting Ben in deep freeze until they can find the parts for medical treatment.

Adam’s search for equipment takes him all over the neighboring galaxies, each new lead on parts just slipping out of his grasp. As Ben’s time runs short and Dax’s motives remain unclear, Adam has to consider just how far he is willing to go to save his friend. 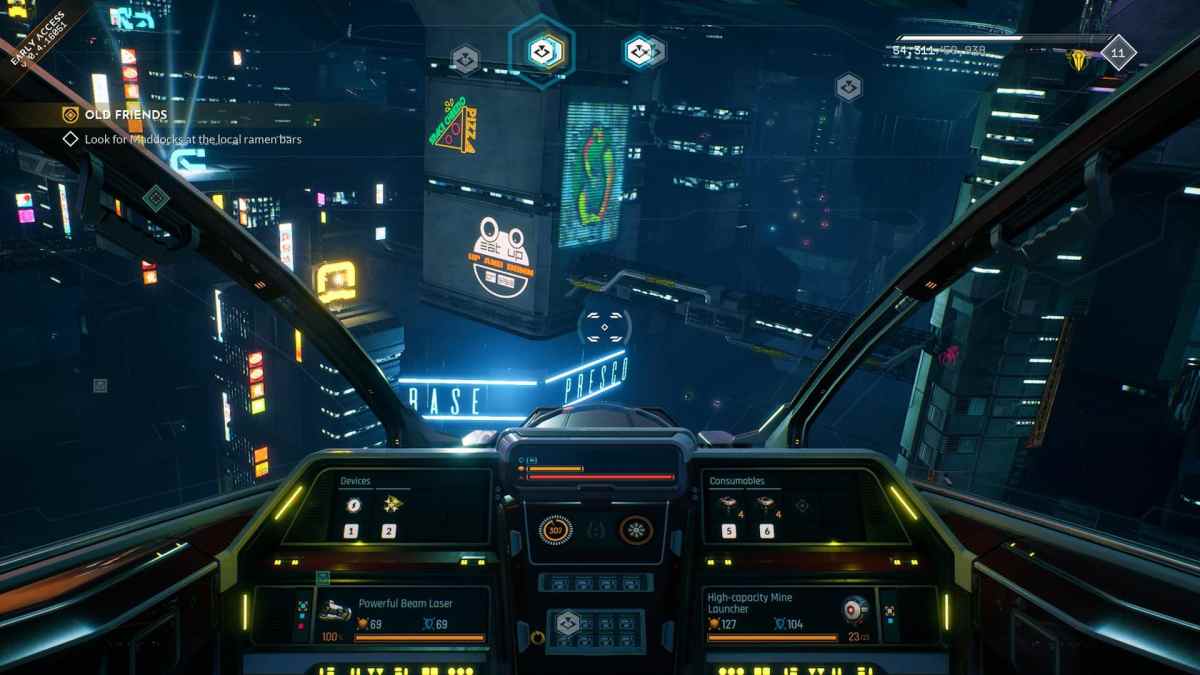 Everspace 2 is much larger in scope than its predecessor, which is crystal clear even in early access. The original game is a linear roguelike, but here the player is free to explore the galaxy at their leisure, no permadeath gating their progress. Adam starts out with access to a handful of planets, but more areas are swiftly unlocked as the player progresses through the campaign, offering a variety of deadly dogfights and thoughtful puzzles. Add on randomized loot and a generous leveling up system, and every moment of exploring the universe is made rewarding.

First and foremost, good controls are vital for a space sim. That access to the full range of 3D movement is hard to get right and is the reason why underwater levels are so universally disliked. Trickier still is finding a system that will work with three different input methods — mouse and keyboard, controller, and joystick. While I cannot speak for the quality of the joystick controls (my Sidewinder from the ‘90s is long gone), Everspace 2 in early access works well for the other input methods.

Controller input feels like a fancier version of Star Fox, and the mouse and keyboard allows for pinpoint accuracy and quick access to all the consumable items. Certain sections are better with one input method than the other — a puzzle where a series of bombs had to be detonated quickly was nearly impossible with the controller’s lower accuracy — but the flying, fighting, and exploring all feel satisfying, to the point where even gliding through hyperspace is pleasing.

Adam’s original self was a top-notch fighter pilot, and his clone descendant has inherited his fighting skills. Weapons in Everspace 2 come in two variants: primary weapons, which have infinite ammo but need to cool down, and secondary weapons, which are powerful but use up ammo. In the early game, the homing missiles are extremely useful, helping the player make up for their own lack of accuracy. The beam laser was also a favorite, a primary weapon that has a short range but deals devastating amounts of damage. 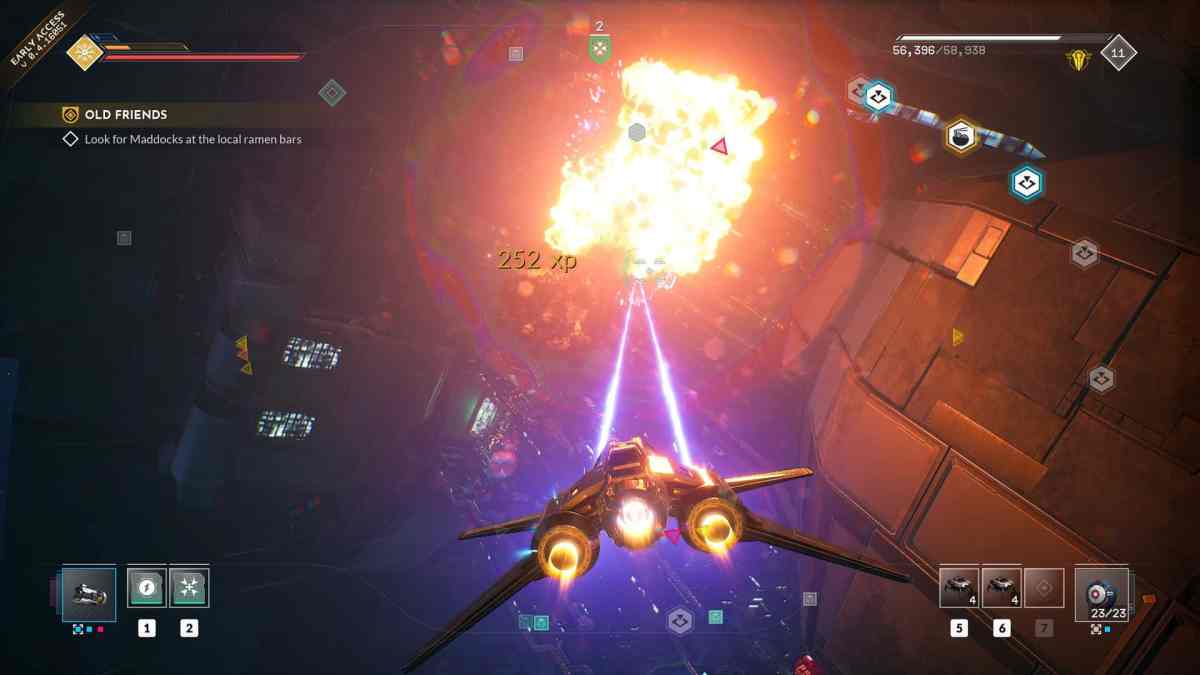 Only about 10 types of weapons are in the game thus far, but each one feels distinct from the rest and can come in many forms due to the randomized loot system. Swappable devices add further abilities, like an EMP blast that knocks out nearby enemies or a magnet-like power that can shove ships away. On top of this, each ship has an ultimate ability that slowly charges over the course of play, best saved for the toughest of bosses.

The many opponents Adam encounters in Everspace 2 early access have their own strengths and weaknesses, but the most important factor in defeating them is movement during the battle. Flying in a straight line towards the enemy only works on the most basic of drones, with other baddies dipping out of sight at a moment’s notice. The player needs to be dexterous in turn, spinning around to meet enemy fire or evade a hurled bomb. The disorienting high-speed combat takes some getting used to — and probably would not be appreciated by players who get motion-sick — but when everything comes together, the fights are dramatic and satisfying. The encounters really push the player to use everything in their arsenal, rather than just sticking to a favorite weapon.

Enemy knowledge is important too: Knowing that a madcap likes to loop around in circles or how long the range is on a sniper drone makes a big difference in combat success. Several different ships can be purchased in-game that change up the feel of combat again: Small ships have fewer weapons but move much faster, whereas big ones have extra weapon slots but poor shields. I spent most of my run in the gunship, a chunky yellow thing that was quite slow but had immense firepower.

In-between high-energy battles, Everspace 2 has slower, environmental puzzles to solve. The player might need to fly through a dangerous factory manned by a broken android or set off bombs in a careful sequence. These mostly optional sections offer a nice change of pace, a peaceful moment between times of intense focus. None of the puzzles are particularly tricky, but they do offer a moment of calm, along with a chance to really appreciate the atmosphere. 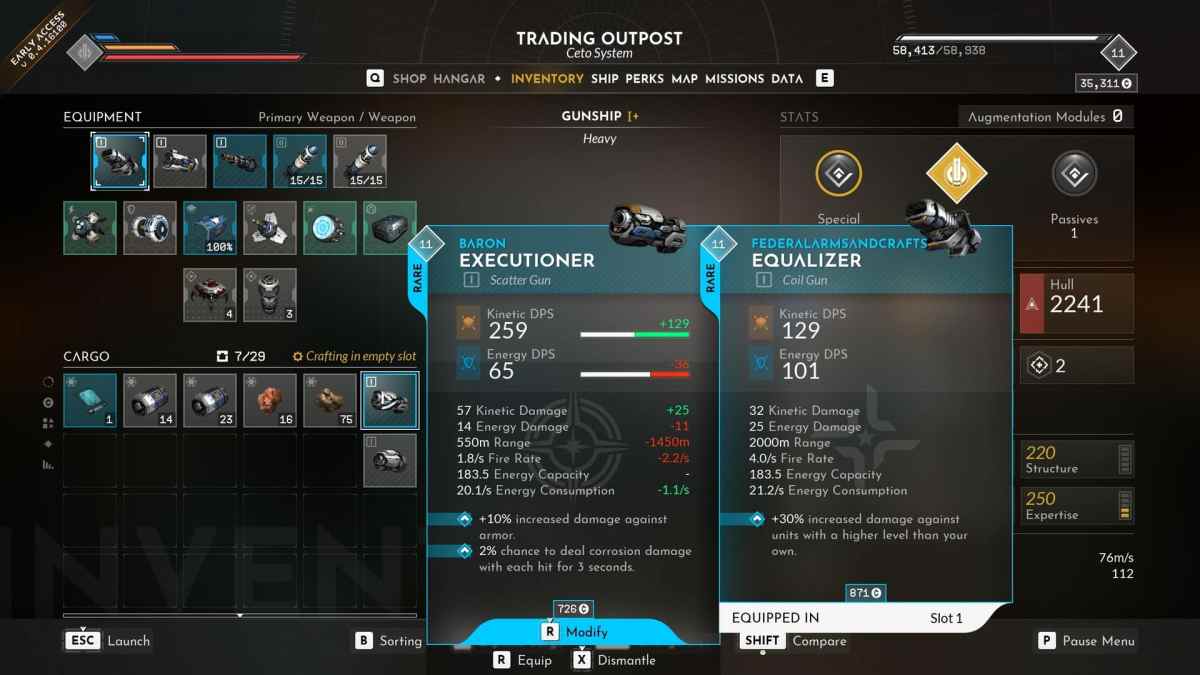 Some sections do more damage than one might expect — colliding with a wall takes a surprisingly large chunk of health, and when the player is weaving through a metallic maze, a few bumps are bound to happen. It is worth healing up before attempting a puzzle, no matter how innocuous an asteroid looks. Complete the puzzle and the player will be showered with loot and experience, both of which can be used to improve your ship.

Everspace 2 carries over its roguelike roots in its loot system. Nearly every enemy drops randomized items, which can be used to swap out weapons or upgrade ship parts. Changes can be made on the fly, making it easy to check if the new armor plating is superior or if it should be scrapped for crafting components. Harder enemies predictably drop better loot, but the little ones are worth picking off too, as every item is useful in one way or another. They can be traded to allies for ship upgrades or sold to traders to help fund the increasingly expensive repairs. Dax at homebase has a use for seemingly worthless components too, using them to craft a better tractor beam for the ship. Each aspect of the game is interwoven back into itself — the looting fueling the fighting, the fighting resulting in better loot.

While most aspects of the ship involve a great deal of item management, fuel is never a problem. Adam can fly wherever he wants for as long as he wants, and he will never run out. This lack of restriction is incredibly freeing and encourages the player to explore. A group of outlaws proving too difficult? Fly somewhere else and come back to it later. Finished 90 percent of a puzzle but low on health? Go fly to a trader; the puzzle will still be the same when you return. This ease of use helped push me to try harder things like the high-risk areas, knowing I could back out if it was too rough. In turn, I fought harder battles and got better at the game, all of which might not have happened if fuel needed to be conserved.

Along his journey, Adam gains experience points from fighting, solving puzzles, and doing favors for traders. Each level up increases all of the ship’s stats by a small amount and allows him to upgrade his devices to have new functions. Every fifth level gives him access to a larger perk, like gaining a brief shield after taking lethal damage. The player can reassign the perks at any time, giving you the freedom to find the build that suits you best. 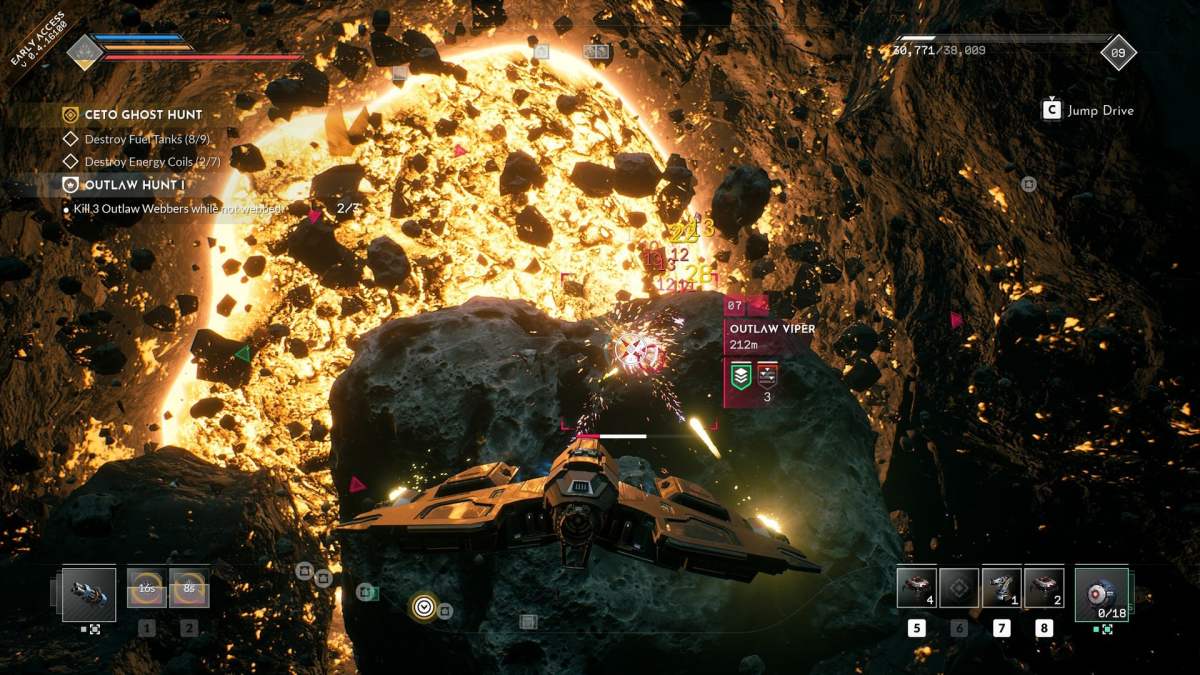 It only takes a glance at any screenshot of Everspace 2 to see the beauty of this game. Every ship, rusting wreckage, and molten core is rendered in immaculate detail. Soaring across the starlit sky never fails to invoke a sense of wonder. The game is optimized well too — my graphics card is a few years old now, but the whole thing runs smoothly on full settings. A cool, serene soundtrack transitions seamlessly into a thumping bassline when under attack, adding to the sense of danger.

The main quest of Everspace 2 is about 12 hours long at this point in early access, depending on how proficient the player is at combat. About the same again can be spent on side missions and exploration. As someone unfamiliar with the genre it took me quite a bit longer to complete the main quest, but it was an enjoyable journey into unknown territory. The story is simple but well told, with full voice acting and animated cutscenes for the important moments. The later cutscenes are not quite finished, unfortunately, but the placeholder voice acting and animatics do cover the events sufficiently.

For a game in early access, Everspace 2 feels extremely polished. Aside from the cutscenes, the only clues that the game is unfinished are really small details, like the lag when opening the map screen or the ship bumping around in the hangar of home base. The only real downside of jumping in now is that, since the game is in an early state, save games are going to be wiped several times before full release in 2022. Even so, with the quality of content on offer, space simulation fans will find plenty to love.