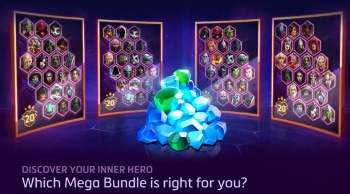 Every single player will be able to choose a “mega bundle” of 20 free Heroes of The Storm heroes when the 2.0 patch goes live.

Do you play Heroes of The Storm? Do you like free stuff? Well today is your lucky day, as Blizzard has just announced a promotion that will give every single player a free “mega bundle” of 20 Heroes of The Storm heroes when its upcoming Heroes 2.0 patch goes live. The best part is that you’ll actually be able to choose one of four bundles that best suits your play-style: the Assassin Bundle, the Support & Specialist Bundle, the Tank & Bruiser Bundle, or, if you are a bit of a jack-of-all trades, then the Flex Bundle contains heroes from every role.

Choose wisely, however, as once you have chosen one mega bundle, you won’t be able to purchase the others. Here are the heroes contained in each bundle:

As you can see, there is quite a bit of overlap between the four bundles, so either way you’ll end up with a very healthy selection of heroes.

Blizzard has stated this promotion will be for a limited time only, but did not specify when exactly it would end.