Games get official sequels, spiritual sequels, spin-offs, and remakes even decades after the originals were released, but nostalgia is a funny thing; despite the low-resolution graphics and the chintzy music, some classic games have a magical hold over us that modern production values can’t replace. If your old favorite was based on the PC, you have a friend in Good Old Games (GOG). GOG’s mission is to track down classic PC games, get them running on modern operating systems, remove the digital rights management (DRM) bits, and release them back into the marketplace. Hobbyists have been doing this for years, so why pay for the privilege? It comes down to convenience, and factoring in the time and effort required to get an old game working, GOG is a bargain.

The whole thing started with the guys at Polish distributor CD Projekt, who got their start distributing games in the mid-90s. One of their early successes was releasing budget PC titles in the Polish market. Combining this experience with a personal love for classic PC games, they founded GOG as a subsidiary. “The idea came from [CD Projekt’s] urge to play some classic PC games like Fallout, Baldur’s Gate, and Duke Nukem,” explains GOG’s PR and Marketing Manager, Lukasz Kukawski. “But when they started to search for those games they came to a realization that many games aren’t available anywhere to buy legally, and even if you own them you’d have lots of issues running them on modern computers. So they were like ‘Hey, let’s use our business contacts and create a digital distribution platform with those classic games.'”

It’s one thing to collect a handful of personal favorites and get them running, but putting together an entire digital distribution system? This was more than just a weekend project. “The next couple of months were strictly dedicated to analyzing the digital distribution market, building a list of the most requested titles by gamers, expanding the concept of the service and preparing the design and programming side of the project,” says Kukawski. From there, things grew rapidly. “At first the team was a small group of designers and web-developers, but it quickly grew into a group of 20 people including more designers and developers, business development people, a band of support/testers and some marketing folks.”

Within months the company was up and running, but what about the games? The Interplay and Codemasters libraries were a good start, but the list of classics is diverse. “First of all, the games we release on GOG.com have to, or at least we hope they do, fulfill requirements that result from the name of the service: Good Old Games. They cannot be new releases. As a rule we’ve picked, our games should be at least 3 years old. If our community would like a game from the early 80’s, we wouldn’t mind releasing it.” Still, there’s no telling which titles will trigger that nostalgic reaction, and the GOG team knows it. Says Kukawski, “Some games just have something that makes you excited when you see the intro or hear the main music theme. You can’t reasonably explain it, you just feel it.” Since there’s no guarantee that all gamers will respond the same way to any one game, the solution is simple: offer more games. “We’re trying to bring back games that were critically acclaimed by gamers and journalists, but also those that for different reasons (bad marketing, release date, etc.) haven’t achieved huge commercial success, but still are considered as cult games. We try to bring a wide selection of games, so if anyone comes over and takes a look at the catalogue, they can find something that will match their taste.”

Choosing games is a tricky business, and GOG has help from the community. “Before GOG.com even launched we did research and created a long list of the most requested old games that people are looking for on the internet. We also have a ‘most wanted’ list on GOG.com that is an indicator for us what games our community expects.” However, just because gamers want a game doesn’t mean that GOG can offer it. For starters, there’s the question of who owns the rights. What happens if the original developer isn’t around anymore? “Lots of publishers and developers have bankrupted, been bought by other companies, sold rights to their games to other companies, etc. So it’s really a hell of a job to find the right people to talk to about those old games. Having the support of CD Projekt who distributed many PC titles to the Polish market in the 90s definitely helps us in approaching the right people.” 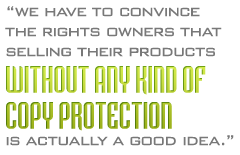 Tracking down the rights to a game is just the first step in the acquisition process. The next step is convincing the owners to let GOG sell the games. “If we finally manage to figure out who owns what IPs we’re contacting the owners of the games and another stage starts in the process. We have to present the offer, negotiate the conditions and agreeing on legal terms,” explains Kukawski. This sometimes turns out to be a bit of a problem, even for games that haven’t been on the market in decades. “With our approach to DRM this can be hard as hell, as in many cases we have to convince the rights owners that selling their products without any kind of copy protection is actually a good idea and it doesn’t mean the games will get pirated. We need to convince them that the games that are laying in their archives and getting dusty can be monetized and bring a lot of good PR. Reviving the brands that were once very popular can even help with new games, so it’s a win-win situation for everyone.” The only thing left is to agree on price, but even that presents its own challenges. “This stage also includes negotiating prices of games, shares of revenue, etc. When everything is clear, the agreement goes to the legal department, where it can get stuck for weeks. In many cases that’s the most time consuming stage in the whole process, and it’s for sure the most boring one.”

With the paperwork out of the way, the technical wizardry starts. In some ways, GOG is like a development studio, just working with pre-existing code and art assets. “Programmers get their hands on masters to optimize them to run on Win XP/Vista/7, testers check the builds, the product team starts working on game pages, additional materials, etc., while the design team prepares all the graphics. When games get finally released we only hope that our users are as happy and excited as we were while working on them.”

It all sounds so straightforward, but sometimes classics were temperamental even back when they were new, and nostalgia doesn’t extend to fussing with proprietary memory managers, sound card IRQ settings, or EMM386.exe. “Compatibility with modern operating systems is one of the features that is really important for us. In many cases even if you have the original disks of many games from the past, there is a big probability they won’t work on your new, lightning-fast computer with Vista or [Windows] 7. The idea behind GOG.com was to create a hassle-free and user friendly service where people can come, buy a game, download it, install and play without any problems,” emphasizes Kukawski. That task is easier said than done, and Lukas jokes that the process is based on magic. In actuality, that magic sometimes takes the form of code borrowed from other community-based projects. “For DOS based games we’re using DOSBox and ScummVM to guarantee the compatibility. We’re really grateful to the great guys behind both DOSBox and ScummVM, that they allowed us to use their great software.” Sometimes though, the GOG programmers are on their own: “for other than DOS-based games our staff is using their skills to make them work properly, and sometimes it’s not an easy task as we don’t have access to source codes of the games.” 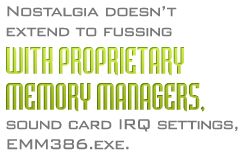 The complexity involved in resurrecting an old game means it can take a long time to bring even one title to market. “First of all it all depends if all the licensing agreements are owned by one company or they are spread across a couple. In the latter example, signing an agreement for such a release can take up to a couple years. Then if we have the deal signed we need to be sure that the game runs on modern Windows systems – DOS based games usually need only some tweaking, but for example Windows 95 games are our programmers’ worst nightmares, as they require lots of work. We also try to include as many additional materials with every release as we can, so if we can’t find some cool goodies it also can slow down the whole process. So as you can see there are lots of different reasons that affect how fast the game can be released in GOG.com. In some extreme situations this could take from a couple of months to a couple of years.”

Classic games are like old friends, and the folks at GOG have done a tremendous amount to work to bring those classics back, even if the process sometimes takes years. The silver lining to the lengthy process is in knowing that the games themselves are timeless classics, and the technical wizardry is being used to recreate a very special kind of magic: that of nostalgia.

Alan Au is a freelance writer, academic, and games industry advocate. When he isn’t busy replaying classic PC games, he spends his time exploring the connection between games, education, and health.