“X” possesses great risks as well as great possibilities. I can only hope for the best. 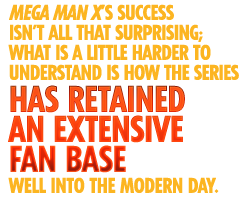 Thus begins the beloved saga of Mega Man X. How many gamers have read those words from the timeless introduction to one of the classics of the SNES era? How many Blue Bomber aficionados have endured countless blistered thumbs, cramped hands, and hoarse-from-cursing throats in order to follow X’s adventures? From humble beginnings on a ruined highway to the final showdown with an angelic Miltonian super-villain, the Mega Man’s second incarnation has proven to be one of his most popular and long-lasting.

Instead of continuing the story of the perennially-popular Mega Man, Capcom moved the story forward one hundred years and took the Mega Man mythos in an entirely new direction. Instead of Mega Man, the storyline revolved around a robot named X, the first Reploid – robots that think and feel as a human does. Joining X in his adventure was Zero, a heroic red robot with long, blond hair. Their opposition came in the form of Sigma, the iconoclastic leader of the evil Reploids known as Mavericks.

The player guided X through eight stages of animal-themed bosses before confronting Sigma in his fortress. Like Mega Man, X could run, jump, fire charged shots, and copy the abilities of fallen bosses. Unlike his predecessor, though, X picked up a whole slew of new abilities as he progressed, including wall-jumping, dashing, and even a well-hidden Hadouken. The controls were precise, the story was engaging, and the graphics showcased the SNES’s potential for fantastic explosions and underwater effects.

The game sold well over one million copies according to Capcom’s sales records and spawned seven direct sequels, three spin-off games, a line of toys, and cameos in everything from the Mega Man animated series to Marvel vs. Capcom 3.

While many gamers wax nostalgic about the original Mega Man titles on the NES, for the younger fans who came of age during the mid-90s nothing takes them back quite like blowing the dust out of the Mega Man X cartridge, flipping the SNES power switch back and forth a few times, and reliving the both the fun and frustration of X’s 16-bit glory days.

Mega Man X‘s success isn’t all that surprising; what is a little harder to understand is how the series has retained an extensive fan base well into the modern day. The original Mega Man series has more installments and has seen much more love from Capcom recently. The Mega Man Zero series received much better reviews than its concurrent X titles. The Nintendo DS has seen new installments for both the Mega Man ZX and Mega Man Star Force series, whereas the X series has been present only as a remake on the PSP.

Despite the fact that there have been no new Mega Man X titles since 2004, the series is still very much alive in gaming’s collective consciousness. The Mega Man X Collection and Mega Man Maverick Hunter X (a comprehensively-redesigned version of Mega Man X) came out in 2006. Even as late as 2011, fan-favorite Zero has shown up in mega-hit Marvel vs. Capcom 3. A simple Google search for “Mega Man X” reveals a slew of fan sites with a thriving online community, while YouTube teems with “Let’s Play” videos and remixed music tracks.

Mega Man X had three installments on the SNES that were everything a kid could have hoped for in those days, and because of their bloodless violence and instantly-recognizable protagonist they were an easy sell for parents. They provided an extremely challenging experience, but any kid with enough patience could triumph over the sinister Mavericks and their machinations. A password save system meant that players would never lose their progress (at least until their mothers threw out their meticulously-maintained Post-It password repositories), Sub Tanks could restore health during even the toughest boss fights, and every enemy, including the final boss, had an easily-discoverable weakness to certain weapons. In short, the games were tough enough to keep kids busy for a long time, while still allowing for victory in a time before GameFAQs.

The second and third installments built on the success of the first one, refining the formula instead of reinventing it. Mega Man X2 added an optional item-hunt that added three very challenging bosses and changed the final cutscene considerably if completed. Mega Man X3 went even further, adding a second set of armor upgrades, three optional bosses that had to be defeated with special weapon combinations, and the fan-favorite Zero as a playable character. Depending on how a player used Zero, the game even offered multiple endings (and a spicy “damn” that managed to sneak its way into a K-A rated game).

One of the reasons the Mega Man X series gained popularity was its relatively elaborate storyline. The plot is not deep and the narrative is not especially compelling, but Mega Man X provided a much more involved story than its NES predecessors. Gone was the world of the original Mega Man, where the nefarious Dr. Wily created robots with the intent of doing mischief. Sigma and his contingent of Mavericks viewed themselves as freedom fighters: the Mavericks were evil due to an omnipresent virus, not any particular intent to do harm. Since X, Zero, and Sigma could think, feel, and reason, their intertwining stories seldom told straightforward tales of good against evil. In Mega Man X2, Sigma’s death failed to make a dent in the Maverick population and in X3, a good Reploid ended up committing unspeakable evil by buying into Sigma’s desire to create a utopia where Reploids could live apart from humans. The stories were darker and dealt with mature themes like free will, sacrifice, and pacifism.

This trend of telling more mature stories coupled with evolutionary steps in the gameplay helped the series transition to the PlayStation. In an era where many major series made the jump to three dimensions (some more successfully than others), Mega Man X stuck firmly to its side-scrolling roots, producing beautiful 2D graphics with Mega Man X4, X5, and X6. X4 provided full, separately playable stories for X and Zero, complete with different animated cutscenes and boss encounters. X5 radically changed the trajectory of the story with an asteroid wiping out most human life on Earth. X6, for the first time ever, featured a main villain other than the iconic Sigma. 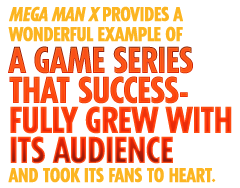 At no time did the series stray from its “run, jump, shoot” 16-bit roots, but the developments of a persistent supporting cast, a stronger focus on story, and the introduction and resolution of multi-game story arcs kept gamers coming back for more in numbers respectable enough to justify future installments. During this time, two GameBoy Color installments came out as well – Mega Man Xtreme and Mega Man Xtreme 2. Despite their Xtreme-ly silly names and recycled content, they told entirely new stories and were perfect for a Mega Man X fix on the go.

Arguably the biggest misstep for the series occurred in 2003 with the release of Mega Man X7 for the PlayStation 2. After having resisted 3D technology for almost a decade, Capcom decided to bring X and company into the third dimension. The results were not encouraging: impossible camera angles coupled with sloppy level design and an annoying new playable hero named Axl irked longtime fans and did little to entice newcomers. Although the Blade Runner-inspired storyline and Axl’s enemy-copying mechanics were novel, neither could save the game from irritated fans and critics. Luckily, Capcom apologized the following year with Command Mission, a full-length turn-based RPG starring X, Zero, and Axl, and Mega Man X8, a 2D side-scroller with strong gameplay, a great story, and attractive 3D characters and backgrounds.

Since 2004, the series has been silent except for remakes and re-releases. This is too bad, as Mega Man X provides a wonderful example of a game series that successfully grew with its audience and took its fans to heart. When Zero gained popularity, he became a playable character. When Sigma’s plots became tired and overused, Capcom introduced new villains (and, more occasionally, new final bosses). Most importantly, as its audience grew up, the storyline evolved – but never changed drastically – from a story of robot rebellion to an eleven-game-long saga involving the end of the world and the fate of humanity. In a nutshell, the reason why Mega Man X has remained so popular, despite its better-reviewed Zero and ZX counterparts and occasional rough patches, is because it has adapted to the changing sensibilities of the players.

With the releases of Mega Man 9 and Mega Man 10, Capcom has shown an interest in keeping its venerable properties alive and relevant. Could there be hope for Mega Man X? Both Maverick Hunter X and the Mega Man X Collection received good reviews and showed that the gaming community is still invested in the X series. On April 18, 2011, Mega Man X graced the Wii’s Virtual Console in North America. After a cliffhanger ending in X8, could Capcom finally be prepping the Reploid for a return?

A new life for the Mega Man X series possesses great risks as well as great possibilities. We can only hope for the best.

Like Mega Man X, Marshall Honorof traded his arm for a blaster cannon long ago. He continues the fight against evil robots at http://chronologynut.tumblr.com.

Everything Good Old is New Again