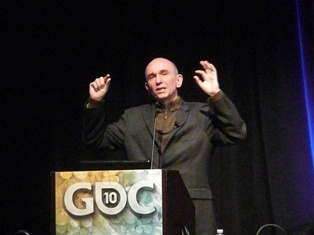 During his presentation on intuitive design at GDC 2010, Peter Molyneux talked a lot about what he learned from making Fable 1 and 2 and what he was going to change for Fable 3. In our interview later that day, I was able to follow up on some of the things he mentioned and get him to elaborate. I also asked him to demonstrate how to give a proper “British Manhug,” and he was happy to oblige.

“Our passion was roleplaying games,” he said during his panel, and then showed a series of screenshots from great old RPGs like Wizardry and Ultima. “Look at those nice numbers there, and stats. We love those numbers. Lots of leveling up in there as well.”

“I was there. I lost my girlfriend because she was down at the pub and I was still playing Ultima,” he said to laughs in the crowd. It was that passion for RPGs that pushed him to make Fable

But ultimately, the sales of Fable were not that impressive. “We sold about 3 million of Fable 1 and about three and a half million on Fable 2,” Molyneux said. Molyneux said that while he loves RPGs, the truth is that action and/or adventure games sell much better. So he decided to embrace that and veer Fable 3 more towards that side of the Action RPG spectrum.

Games are different than a lot of other media in that sequels often do better than the original, citing Modern Warfare and Mass Effect as examples. So by shifting the focus of Fable 3 and growing as a sequel, “We’re obviously hoping for a lot more [sales] on Fable 3.”

When we sat down at the St. Regis hotel later that day, Molyneux wondered if he should be more technical in panels like that. “The point that I was trying to make was that Fable 3 needed to be more than just a Fable 2.5. It needed to make a big leap forward,” he told me.

The big leap in Fable 3 for him boils down to addressing how the game makes you feel. “It was all about the feeling of power. You know I come from a school of designing God games,” he said, referring to titles like Populous and Black & White. “I quite like that feeling, this feeling of power.”

Molyneux uses that feeling by letting your character become king about halfway through the game and rule Albion as you wish. “The story is not just, you start the game as nobody, you get a little bit of power, there’s a big baddie, you have a big fight, you do the fight, win and the credits roll. That’s what a lot of games do, including Fable 1 and 2,” he said. In Fable 3, all of that hero’s journey stuff is there but it’s the part afterwards that really interests Molyneux. “What happens after you defeat the bad guy, when you yourself become king, I think is really interesting. I haven’t seen many other games, if any other games, that have done that.” 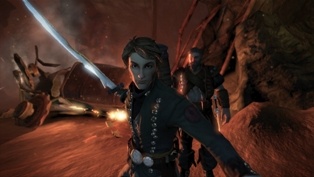 In the panel, Molyneux mentioned that once you are king, it is your choice whether or not you live up to the promises you gave to your followers. He was really inspired by a current figure who came to power after so many wonderful promises and has not done everything that he said he would, President Barack Obama.

I asked him about that afterwards and Molyneux said that trend of not living up to expectations has plagued leaders throughout history. “Pretty much, in history, over the last two thousand years, the same thing happens over and over again. People will say anything to get to that position of power, and then when they are in that position, there have been very few leaders, rebels, revolutionaries, kings, queens, monarchs, dictators, that have actually delivered on their promises.

“Obama said, ‘I’m going to close Guantanamo bay in a year.’ To me, it’s this simple, pick up a phone, ‘Hey, President of the United States here. Close Guantanamo Bay. Thanks, bye.'” Obviously, it is not that simple, but Molyneux wants to simulate the experience of using power responsibly in Fable 3. “We want to give you a feeling for this: ‘Ok, I’ve got all of the power now? I’ve made all of these promises on the way to becoming king or queen. How many of them am I going to live up to?'” he said.

That’s a very interesting thing to hear from Peter Molyneux. He has made quite a few promises in his career and hyped up his games so much that one might think he was designing that mechanic for himself. I asked him point-blank about his reputation for over-selling his games.

“I am the worst PR person in the world,” he told me. “If it was up to me, if I didn’t have these really smart clever people behind the camera, with poison darts that they can spit out of little pen tops, I would just say ‘Fable 3 has this, this and this.’ You would sit there and think ‘My god, he’s on some horrible drug and he won’t stop talking.'” But he said that the PR folks really try to keep him from blurting things out, especially sensitive subjects like casting and Project Natal. “While they get very frustrated with me, it actually is quite smart. Saying that, I don’t agree with them 100% of the time.”

I started to ask a follow up question and he quickly said, “Remember that they’ve got poison darts, and your back is turned.” 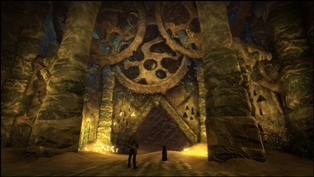 Molyneux is a very funny guy, obviously, and I asked if he was responsible for some of the humor in the Fable series. “There were some of the humorous bits with the gameplay where I said, ‘If we do this, it will be hilarious.'” But in general he gave props to a writer on all of the Fable games, Mark Hill, who is excellent at writing the humor, perhaps because, like most of the team at Lionhead, he is British.

And that brings up a very interesting tidbit. During his panel, Molyneux mentioned that there is a distinct difference between the American “bro hug” and the British “male embrace.” I asked him if he could demonstrate it for me and we stood up to hug each other. “This is the way the Americans do it, and there’s a bit of slapping [on the back], but what’s going on down here is our groins are quite close. Our testicles are about that far apart. Let’s compare that with the British one. To start, we’re going like this,” he said while leaning forward with his hands out stretched. “Notice that the distance between our testicles is around about five feet. Any closer, and we start to get very nervous, as British people. They hate this body contact thing.”

It’s odd then that Molyneux would add a feature to Fable 3 that he calls touch. By pressing a button, your character puts out his hand and can interact with other characters in the world. This was demonstrated with your daughter during the panel and it was neat to see you chastise her, and then hug her to soften the blow. You can also use touch on random NPCs like a beggar. “I showed what it felt like to sell someone to a factory,” he told me. “This beggar asks you for money, you use touch, you reach out, you hold his hand, he’s quite happy. As soon as he gets the idea that something is going wrong, he tries to pull away from you. But you’re dragging him to his doom.”

Never mind, perhaps that is British after all.