Fallout 3 is more than just a game, it’s a gateway to further RPGs. 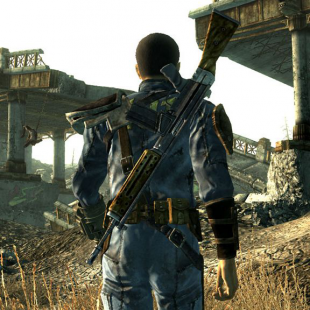 Before venturing into the land of the RPG, I had limited myself to the sports and FPS genres. I was comfortable with Madden and Tiger Woods because they dealt with things I knew and understood. I grew up playing organized football and went golfing every Sunday so they were will within my comfort zone. I could speak their language and I knew where to go and what to do. The FPS, on the other hand, was more of a cathartic outlet. The feeling of squeezing the trigger and round upon round of ammunition getting pumped into an enemy was exhilarating and it made being a customer service rep bearable. Virtual murder is a much more socially acceptable action than actual murder. Then I met Fallout 3, with its first person shooter feel that was just so much more than any Call of Duty game I had played before. I was used to running and gunning but Fallout had V.A.T.S., the Vault-Tec Assisted Targeting System, which is honestly the closest I’ll come to loving a tactical mechanic. I had never played anything vaguely resembling a sandbox. My games had been fed to me on a rail and I had been happy with that because that was all I knew. Fallout 3 took what I had already loved and expanded on it, took the drab FPS and made it a drab RPG with a strong FPS leaning. The RPG feel finally made me see what everyone loved about that genre. I realized with Fallout 3 that an RPG didn’t have to be full of impractically sized weapons or crazy hair but can depict a “real” world that didn’t rely on fantasy or outlandish plot twists.

The weapons and how you could use them was really what first made me attracted to Fallout 3. The fact that you could play the game as a standard FPS helped but the V.A.T.S. just kicked it up a notch. The ability to pause time for a moment to focus on which areas you wanted to fire blew my mind. I didn’t think this was possible; Call of Duty or Battlefront didn’t allow this. I had found a great gun mechanic that I could get behind, something that was different and brought the experience to another level of involvement. Whenever I would go back to a traditional FPS I had to wean myself off of trying to hop back into V.A.T.S. when facing an enemy. I was very comfortable with the standard shooting mechanic and yet this addition was much more user friendly and so much more interesting.

I wasn’t a role player before Fallout 3. I would play my games and really just be there in the moment and didn’t take it any further, I didn’t have to think about where I was going or who I was shooting, the fine people from Call of Duty had already made those decisions for me. I could affect the world permanently – my actions had consequences. No saving then reloading when things didn’t go as planned for me. I was in this and in it for the long haul; if I made a mistake I had to live with that mistake. That mission statement led me down some pretty dark paths, and I became a bit of an in-game psychopath. After I had finished with someone, maybe they had sold me ammunition or fixed my weapons, they were literally dead to me. If an NPC said something that I didn’t like, I would put them down without a second thought. Eventually I started to actually appreciate the NPCs, their stories were affecting me and began to affect my play choices. I started letting people live because they started showing me that not everyone in this desolate waste was an actual desolate waste. I took on a companion and would talk to them through the screen. I had gotten a taste of the RPG life and it tasted good. I wanted more.

An open world was a very alien idea for me. I was used to the confines of a football field or a golf course or a specific map in an FPS. The ability to walk freely and choose my own way was liberating. I was now in a world that I could inhabit. I could make my mark on this wasteland in any way I chose. When Three Dog, the radio announcer that you would have in your ear telling you about the current situation in and around Washington D.C., got too annoying, I decided to do something about it. I found him at the Galaxy News Radio building and killed him. He was just there, not even broadcasting, like he was waiting for me to show up and shoot him without even putting up a fight. From my previous gaming experiences, I assumed he would respawn and start his incessant babbling again when I reloaded the game or when I went to a new zone. I was surprised and appreciative removing Three Dog was a permanent effect on your game. There was no more Three Dog, he had been replaced by Margaret. My mind had been blown.

While I had played games before, Fallout 3 made me a gamer. It made me appreciate where gaming can take you. The limits had been moved and that alone makes Fallout 3 one of the best games in the past ten years, if not the best game ever created. The fact that it helped me learn there was so much more out there than just shooting, killing and scoring was liberating. Now I want more, with the next generation of consoles and the new generation of game developers entering the industry, we’re going to see where open world RPGs can lead. How big of an open world can you get? Where can that open world take you? What affect can the player have on the world? I can’t wait to see the answers to these questions and the worlds that will be created for my enjoyment.