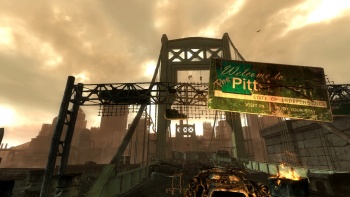 Pete Hines, VP of public relations at Bethesda, invited The Escapist to sit down with him during the 2009 DICE Summit to get some hands on time with The Pitt, the newest DLC for Fallout 3. Of course, knowing how much you guys dig the Maryland folks’ work on the long-awaited and much loved third installment in the Fallout series, we jumped at the chance.

First, some background: This second of three planned DLC packs is set in Pittsburgh, PA, which has become a center for raiders and ne’er-do-wells. The name, The Pitt, is a play on both the name of the city, as well as the dire conditions of life in this hole. Sure, life isn’t really fab anywhere, there was a nuclear holocaust after all, but The Pitt brings things to a whole new level.

You see, The Pitt is inhabited by Slavers, led by Ashur, and their slaves. True to the Pittsburgh we all know and love, the business of the Slavers is … anyone? Anyone? Yep, working with steel. So there are slaves wandering about, heads down, trying to look busy to keep from attracting the attention of their masters. These Slavers wander around – wearing fancy new raider outfits, mind you – with weapons, ready to enforce the rule: Work, or die. The slaves are busy obeying that One Rule, carrying back-breaking loads of steel or cutting large I-beams with AutoAxes (New Weapon Alert!), or large chainsaw-like items with a large rotating saw blade on the end.

That one finds himself in the grimy Pitt after completing the shipped title, feels, well, a bit … unholy. But Hines explains to me you just jump into a save game from before you finish – perhaps even the handy autosave before the ending? – and you’re in business. You’ll receive a message and an update in your Pip Boy for a quest to help Wernher, and you are off to the lovely and exciting destination of The Pitt. 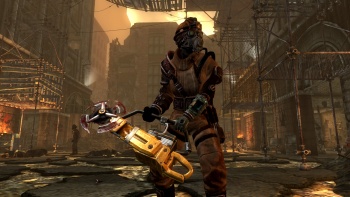 In chatting with Wernher about the Slavers in The Pitt, he explains he needs you to get inside and find The Cure. This Cure is a remedy for mutation, prized stuff in a post-nuclear apocalyptic world. After strolling through the outskirts of town, which may look familiar to those who’ve been to Pittsburgh (a few guys on the Bethesda Dev Team are from Pittsburgh), he shows you a group of slaves in the middle of being sold to the Slavers. Wernher suggests donning one of their slave outfits as a way to infiltrate the inner-sanctum of The Pitt. True to the Fallout series, how you get that slave outfit is up to you; kill the slavers and free the slaves, or kill the slaves and loot the corpse, whatever floats your boat.

And that decision is the first clue that the moral choices so basic to Fallout are back in full force with this second piece of DLC (unlike in Operation Anchorage, which was meant to be more of a fun romp, without too much thinking involved). In fact, you’ve just met Wernher; is this guy even telling you the truth? Who’s really behind the whole place? What, exactly, is going on here? Moral ambiguity makes a strong play in The Pitt, which should please fans of Fallout immensely.

Once inside the Slaver encampment, you go looking for Midea, a slave to whom you’ve been directed by Wernher. She suggests you are going to play a vital role in an uprising against the slavers, but there are a few things to do first. You are sent out into the even grimier, sketchier parts of The Pitt to retrieve steel ingots amongst the Trogs. 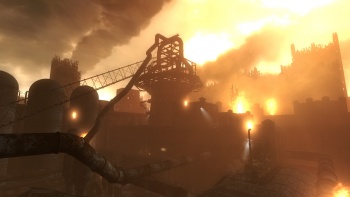 The Trogs are a new enemy – once humans, the Trogs have become so mutated and foul, they are hardly human anymore. They crawl around on all fours, skittering in the shadows, until they jump out at you to attack – generally in packs. The effect is a bit creepy, wandering amongst the tattered remains of factories and train yards, and suddenly the animalistic, zombie-like creatures jump from a shadow and begin gnawing on whatever part of your person is most handy to them.

Once you’ve collected enough ingots, and certainly jumped a couple times from Trog attacks, a return to the Slaver camp will get you some manner of prize. Yes, for you guys who like the loots, you can repeat this over and over and build up an array of goodies, which might be a good idea for the next part of the quest.

Returning to Midea after surviving the ingot run, listen to the slaves wandering around: They’re suggesting Ashur’s gonna get his someday; there does appear to be a rebellion brewing. Midea’s also about to fill you in on your part in all this rebellion brouhaha. There’s to be an arena battle and the winner gets an audience with Ashur. The arena battles range from slave v. slave battles, on up to some of the raiders versus, well, you. Feeling up to the challenge?

I was, but at this point, Pete needed to appropriate my controller for some other folks waiting for a turn. So while I was packing up, I asked a bit about the genesis of The Pitt. He said its roots began post-beta. “After a point, you can’t add anything else to the game, really, but not everyone on the team has necessarily seen every detail of the game. There are definitely things that people said, ‘Oh, it would’ve been cool to do this!’ or ‘We need more of that, it’s awesome!’ That’s The Pitt.”

Were they able to take into account some of the user feedback for this DLC? “Not really. Not for this one. Broken Steel, the next one, yes. We got a lot of people saying they didn’t want the game to end. Bethesda’s games are usually still playable after the main storyline is finished, but we were sticking to the Fallout style of game. But people want it, so Broken Steel is … what happens in the world after the main quest is over. You have to finish the main storyline to play Broken Steel.” Not enough for you? Broken Steel also raises the level cap.

So, the first DLC is an adrenaline rush through the Battle of Anchorage and a bit of lore from the Fallout series. The Pitt, the second bit of DLC, is more of the awesomeness you saw in the main release. And down the line is the community requested “What happens after?” Yes, please!