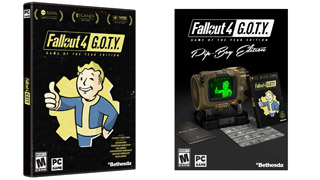 Fallout 4 is finally getting an all-inclusive Game of the Year Edition.

It’s been nearly two years since Bethesda launched Fallout 4, the latest installment in its post-apocalyptic role-playing series. The game took players to Boston, where they played as a Vault dweller 210 years after the Great War. Now, Bethesda has announced that it is planning to release a Game of the Year Edition of Fallout 4 next month.

The new release will include the base game, as well as all the updates and add-ons. That means you’ll get Nuka-World, the Vault-Tec Workshop, Contraptions Workshop, Wasteland Workshop, Far Harbor, and Automatron. That also means that additions like Survival Mode are also packed in.

In addition to the Game of the Year Edition, Bethesda plans to make a limited number of Fallout 4 G.O.T.Y. Pip-Boy collector editions available for $99.99, but only at “select retailers” in North America. Both versions will arrive on September 26 for PC, PS4, and Xbox One.

The New Dishonored: Death of the Outsider Trailer Shows Off Billie Lurk’s Quest to Kill a God