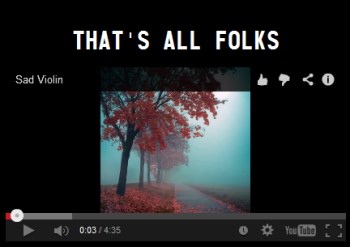 The Fallout 4 teaser site at thesurvivor2299.com has been revealed as a hoax.

It was the outcome nobody wanted, which is probably why it was the one we were bound to get: The teaser site at thesurvivor2299.com, with its exciting story of what appeared to be an attack on a Vault by the mysterious forces of the Black Row, has turned out to be a fake. Yesterday evening, the site dropped it’s encoded messages in favor of a link to the 2009 YouTube video “Tunnel Snakes Rule,” and today it’s a sad violin, accompanied by a tip-of-the-hat message to the /r/Fallout community on Reddit.

It’s a disappointing end to a promising tale, not because it means that a Fallout 4 announcement isn’t imminent (although that’s unfortunate too) but because it’s such a weak ending to a remarkably strong setup. To put so much effort into crafting such an elaborate scheme and then end it like this seems a real waste.

Then again, it’s not my hoax to judge, and it was a lot of fun while it lasted. And so I say thank you, whoever you are, for the good times. It wasn’t the destination we’d hoped for, but it sure was an entertaining ride.