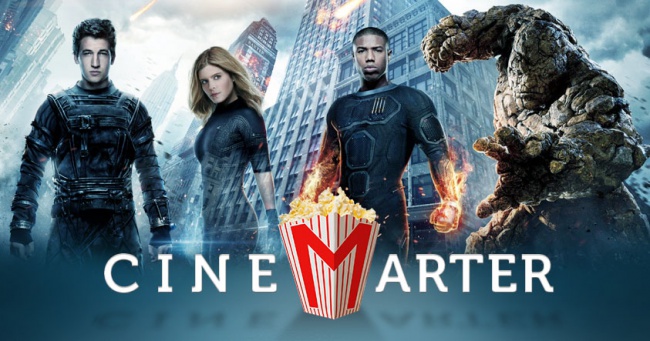 By now I feel like most of the people reading this review are aware that 20th Century Fox purchased the film rights to The Fantastic Four from Marvel back before Marvel started to make movies by itself, and now in order to keep those rights, they have to make a Fantastic Four movie every few years. As such, in order to keep the rights, we have a new Fantastic Four movie, rebooting the series with cheaper and younger actors. You’ve heard of franchise maintenance before, but this isn’t even that; it’s studio maintenance. It exists so Fox can keep the rights away from Marvel; it’s the movie-business equivalent of hoarding draft picks and prospects.

As a result of this, it probably shouldn’t surprise anyone that Fantastic Four – or Fant4stic, as the marketing team has decided it’s called – isn’t any good. It wasn’t made with that intention. It doesn’t want to tell a good story, it doesn’t want to make you think or feel – it doesn’t even really care about entertaining you. It exists to re-establish these characters in the public’s consciousness, leave open the possibility for a sequel, and make sure that Fox keeps the franchise’s rights for another decade or so. It’s been made for the most cynical of reasons and it shows. There’s almost nothing good to be found here. 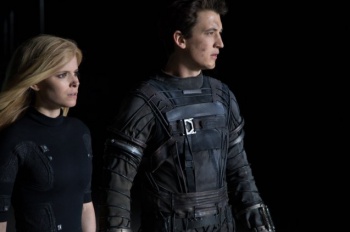 The story is of the origin variety, since this is a superhero reboot and that’s the path of least resistance – or should I say “effort”? Four intelligent people with very little personality figure out a way to teleport organic matter, but can only do so by forcing it to go to another dimension. They go to this dimension, are infused with energy from it, and gain superpowers. They will, with about ten minutes left in the movie, become the titular “Fantastic Four.” Until then, they sit around a government facility, do a bit of training, and wait for the villain to show up so they can magically overcome all of their interpersonal problems and save the world.

Seriously, the villain of the film – and as such the singular reason for action scenes to exist – only shows up in the last twenty minutes of Fantastic Four. He delivers his evil plan, which he’s come up with because of reasons that are never especially clear, and then in the final ten minutes we finally get to see a fight. Before then, there’s no action at all. It’s mostly just people sitting around and spewing exposition, as if there can’t be any mystery to the way everything works; as if the audience is too stupid to comprehend that superpowers can exist; as if there wasn’t enough of a story to fill a feature-length movie, so the filmmakers decided to overshare in order to fill time. There isn’t enough substance here to fill a 30-minute episode of a cartoon, but the filmmakers have stretched it to fill a 105-minute running time.

Fantastic Four is a bad movie, an awful superhero movie, and a terrible way to restart a franchise.

The leader of the group is Reed Richards (Miles Teller), who was recruited right out of high school, because he built a miniature teleporter with scrap metal. Sue Storm (Kate Mara) is good at analyzing patterns, a skill that comes in handy precisely once. Johnny Storm (Michael B. Jordan) can build things pretty well. Ben Grimm (Jamie Bell) is there … because he was in the comics, I guess. Their superpowers, in order: elasticity, invisibility/force fields, fire, rock monster. I just did in a paragraph what it took Fantastic Four almost 90 minutes to do. You’re welcome.

There’s almost nothing to like about Fantastic Four. They’ve taken a “gritty” approach to the reboot, which basically just means the lighting’s a bit darker and there are only a few jokes. It’s not “fun,” is what I’m saying – although if it had good action or characters, one could still derive entertainment from it, which is something I couldn’t figure out a way to do, mostly because it’s devoid of both of those things. The character designs are poor, especially those of the villain and Grimm. The lackluster-at-best CGI doesn’t help matters. The actors are here for a paycheck, and it’s painfully easy to tell their lack of enthusiasm. It’s so boring that it would be difficult to hate if it wasn’t for the cynical reason that it exists at all. But for that reason, it’s worth the disdain.

Josh Trank directed Fantastic Four, and if you recognize his name, it’s probably because he also directed Chronicle, another movie about young people getting superpowers. That film was hampered by its found-footage cinematography, but at least watching its characters use their new-found powers was entertaining. Teenagers would, after all, probably just goof around for a while as they discover the limitations of their powers. If he had brought some of that creativity and energy to Fantastic Four, perhaps it would have turned out differently. But there’s no creativity or energy here. It’s devoid of anything but obligatoriness. It exists because a contract demands it.

Fantastic Four is a bad movie, an awful superhero movie, and a terrible way to restart a franchise. If it was supposed to get us interested in the Fantastic Four, it’s a failure. But it doesn’t want to do that. Fox needed to make a movie to keep the rights to the property; if it also makes some money, that’s almost a bonus. It’s boring, lazy, uninspired, and one of the least action-packed superhero movies ever.

Bottom Line: Fantastic Four is a movie made for cynical reasons. It has no intention of being good and didn’t magically turn into something worthwhile.

Recommendation: Giving money to Fantastic Four will keep Fox interested in keeping the rights. Skip it and pray that they return to Marvel at some point in the near future.